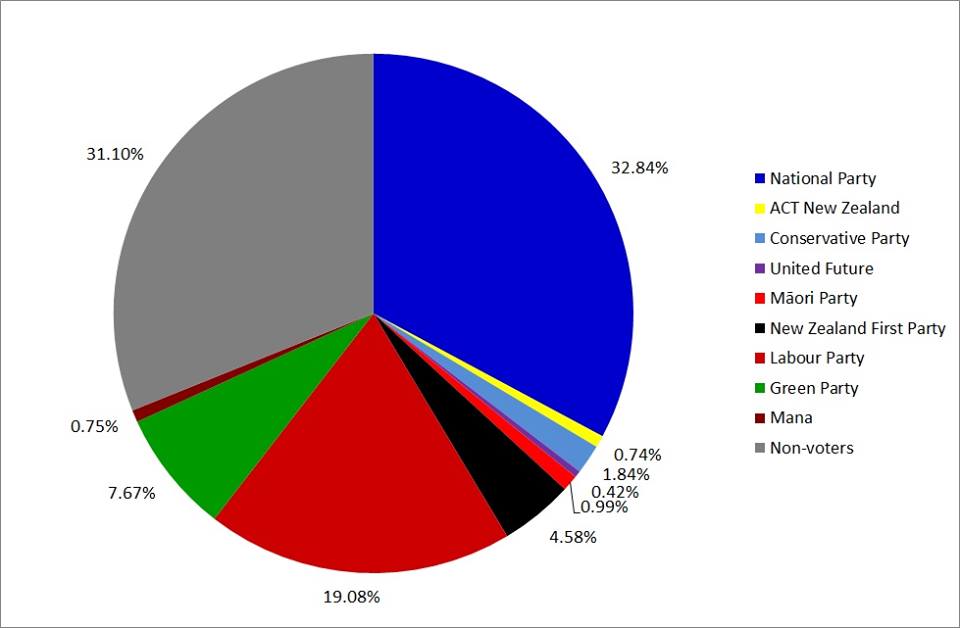 When I helped set up MANA it was because no matter how many times I did the math, the Greens and Labour could never be the majority. They always ended up relying on NZ First and when it comes to genuinely progressive legislation, NZ First is one giant brake pedal.

So I argued forming a small party to the left of the Greens using a sub 5% threshold strategy might be the difference.

Last election it could have been.

We forget just how close the last election was even with National winning 47.31% of the vote. Key only managed to form a one vote majority. This election National are facing more challenges from far more serious contenders and are doing so with ever decreasing coalition prospects.

Despite the depressing polls – the reality is that NZ could be in for one of the most progressive Governments it has ever had.

A Labour-Green-Internet MANA majority could offer passage on real reform the like we haven’t seen in 30 years of neoliberalism. 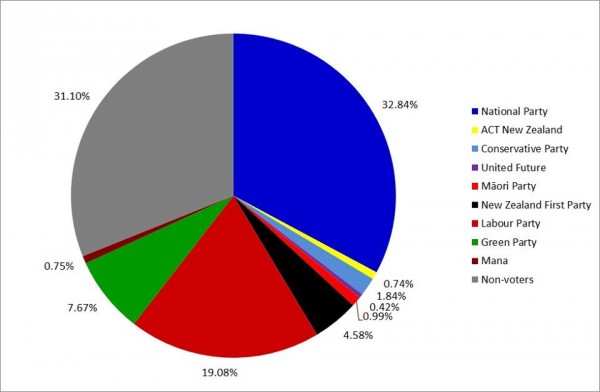 …the difference between kicking this Government out of office and replacing it with a dynamic one that welds social justice back into the framework of the economy is a reality this election. That’s what is so frustrating about the political apathy, so few understand, that under MMP, your vote really does count.

This Government have given us nothing from this economy.

Relying on unsustainable dairy farming, housing speculation and a rebuild from a natural disaster is not an economic policy.

Borrowing billions for tax cuts which in turn subsidises those same elites purchase of state assets that we once all owned is not an economic policy.

John Key is a smile looking for a murder. His easy going dad routine is as manufactured as the downplaying of his  actual wealth. He is a ruthless political foe whose interests are innately his own and have nothing to do with the wider welfare and prosperity of ordinary NZers.

The day a NZ Prime Minister has a Hawaiian holiday mansion is not a day for us to celebrate.

The empty mindless aspiration candy that Key peddles with his so-laid-back-he’s-horizontal style of politics must be overcome with genuine enthusiasm that we can change this little country away from the ruthless corporate warlords towards intelligent and reasonable people as leaders.

David Cunliffe is  a warm, intelligent, funny, smart as hell guy who can work relationships the way a coalition leader will need to. We would be lucky to have the chance of him being PM. Metiria Turei is one of the most trust worthy, honest, hard working, passionate NZers I’ve ever met who could do more for NZ in one term than anyone else I know. Russel Norman has a fierce intellect and command of the economy second to none on the political left. Hone Harawira is one of the great civil rights leaders this country has had in modern times and joined with Laila Harre, a leader of immense intelligence and talent who is universally respected and feared will be a force for progressive politics this country has not seen the likes of.

So how does this all come to pass?

Watch for the Greens to surge: The Greens have shown an MMP sophistication that deserves to be seen as one of the best played so far in the election. Their carbon tax cut and decriminalisation of abortion policies were a deep raid into National’s soft blue vote who have very little loyalty and will see Key flirting with Colin Craig as a total affront to what all their education has taught them. Greens are on track for 15% because of this clever move into National’s soft blue vote.

Cunliffe on the campaign trail: Beyond the manufactured smears and sensationalised news headlines, Labour as a Party Machine is a terrifying thing to behold. They are battle hardened and tested. The surge of members Labour has generated has birthed a renaissance in the electorate offices and this is never acknowledge when considering Labour’s chances. Cunliffe will fire the base the way Goff couldn’t last election, and this will in turn generate momentum during the campaign. Getting Labour up to 32% is all David needs to do.

Where Internet Party are picking up voters: My initial suspicion as to who would be the members and vote seems to have been born out when talking to those inside the Party taking memberships. Asian-NZers are a large part, those who didn’t vote are a next largest and the largest membership increase is from young male urban national voters who voted National by default not design. They saw no room for welcome in the Labour or Green Party’s so have just voted National. They don’t source their income from National’s love affair with Dairy, so see investment into the internet as a major plus they can rally around. They were never particularly ideologically right to begin with and have no problems working with the IMPs broad collection of voices.

MMP tactics and the role of social media: Tactical voting is only effective if a large number of people do it, the problem is getting the same tactic heard everywhere, that’s why social media changes this immensely. Tactical voting guides can be passed from friend to friend virally online and recommended as the means to change the Government. This could be our first real MMP election where the voters are all actively strategic with both their votes.  The Daily Blog will post a progressive voter guide, electorate by electorate for the election.

I blogged many moons ago that the meltdown of neoliberalism meant there was no political middle ground any longer and that  the extreme parts of the political spectrum would decide the fate of NZ. The next Government will be decided by either the Conservative Party or Internet MANA.

The very soul of our democracy will be fought over – are we real left or far right?

A Labour-Green-Internet MANA majority is worth fighting for.