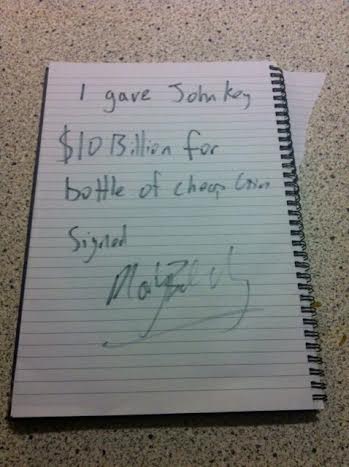 I’ve just signed a statement saying that I’ve donated ten billion dollars to John Key for a bottle of cheap gin – where’s my front page and lead item on the TV news?
The woeful quality of journalism that has passed for this Donghua Liu story will demand some heavy questions behind the scenes and maybe even gain some attention surely from the Press Council?
All we have to date is a 6 week old bullshit signed statement that means nothing. If Donghua Liu was genuine he would sign an affidavit, he hasn’t. So his signed statement is about as credible as my signed statement claiming to have donated $10 Billion to John Key, yet major news outlets have run with this story as if they have clear legal protection to do so.
Unless Donghua Liu comes forward this week with an affidavit, the Labour party should take defamation action against every major news outlet for what amounts to the regurgitation minus any credible evidence of a manufactured smear.
I’m getting this terrible feeling that the entire NZ mainstream media have run with a Government created lie and not critically evaluated their one roll in perpetrating that lie.
I think we all appreciated that the mainstream media bias against Cunliffe and the Left was pretty entrenched, but sweet Christ, just making shit up and running with it is unbelievable. Where is the evidence that any of this has happened?
Surely we as voters in a  free democracy should demand way more from our journalism than this nonsense?