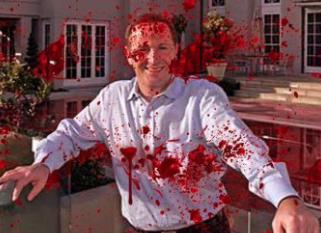 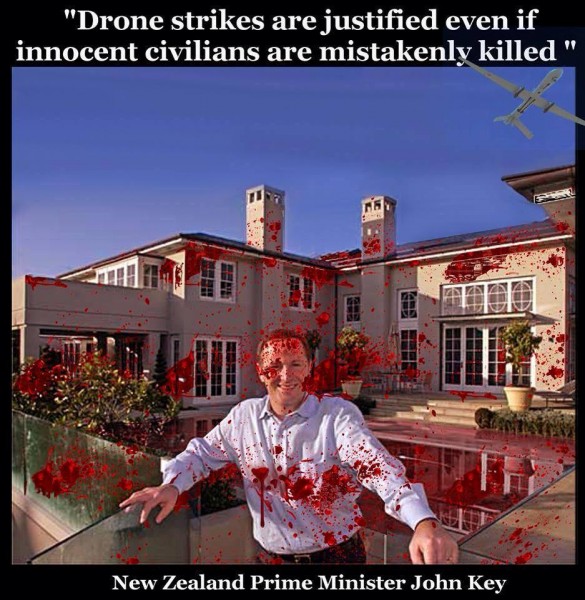 So let me got this straight. Fundamentalist extremists funded by Saudi Arabia have burst out of the Syrian war and taken over vast swathes of Iraq, the country the West bombed for democracy, and the US will need to work with Iran to prop up whatever remains of Iraq and John Key wants to get us involved inside this cluster fuck?Hands up who isn’t comfortable with directing drone strikes in Iraq?

Our simplistic and idiotic media seemed to have taken Key’s assurances that NZ wouldn’t send boots on the ground into Iraq as some sort of answer when in reality NZ was always via its 5 Eyes spy network going to be involved in the targeting side of this new conflict.

We may not pull the trigger on these drone strikes, but we sure as hell point the gun.

In his rush to sign NZ up for new military adventures in Iraq, Mr Key seems to have forgotten the cost while reviving his war lust.

The US war in Iraq has cost US$1.7 trillion with an additional US$490 billion in benefits owed to war veterans, expenses that could grow to more than US$6 trillion over the next four decades counting interest.

The war has killed at least 134,000 Iraqi civilians and may have contributed to the deaths of as many as four times that number, according to the Costs of War Project by the Watson Institute for International Studies at Brown University.

When security forces, insurgents, journalists and humanitarian workers were included, the war’s death toll rose to an estimated 176,000 to 189,000, the study said.

…let’s remember the other wars America engaged in…

The 2011 study said the combined cost of the wars was at least US$3.7 trillion, based on actual expenditures from the US Treasury and future commitments, such as the medical and disability claims of US war veterans.

That estimate climbed to nearly US$4 trillion in the update.

Excluded were indirect deaths caused by the mass exodus of doctors and a devastated infrastructure, for example, while the costs left out trillions of dollars in interest the United States could pay over the next 40 years.

..and what did brave John Key have to say at the time???

…that’s right, Key’s concern was that if we didn’t rush into this immoral war with America we may miss out on a free trade deal.

A money man who knows the price of everything but the value of nothing.

Add to this new submissive role to America comes news that National want to change our foreign policy to support more of America’s war. As Idiot Savant points out at No Right Turn..

“what really takes the cake is the removal of the requirement that military operations “be acceptable to the New Zealand public”. No, they don’t provide any justification, because there cannot be one. It runs contrary to the fundamental principles of democratic and accountable government.”

This is why our bid for a seat on the UN Security Council is such a joke, why would any country vote such a spineless extension of America’s hegemony onto the UN Security council?

A Muslim kid lay dying
In an opium field south of Bamyan,
And he said to his GCSB drone,
“I reckon you’ve got it wrong, man!

‘And if I could fly like a hell fire missile
To your whare
An IED and a Koran could never drag
Me away from vengeance.

‘A cup of rice and an AK-47
Looked better than another occupation,
And they told me that Muhammad
Would have fought in the Afghan battle.

‘On my last leave the village was bombed
Like a bucket full of guts.
The girls screamed in unison
And I weeped for the girls.

‘Like lambs to the abattoirs
In the name of freedom
You flew 13609 kilometres
to kill for that liberty,

‘And what you found in Afghanistan
Was mud and blood and fire,
With the Yanks and the Taliban taking turns
At murdering the poor.

‘And I saw no reason for it
In a drones blazing eye –
We fought for the crops of poppies
And you are fighting behind the poppy.

‘So go tell my family
To get another boy
Who’ll stand at night against your death
And who’ll cry when the bombs blow,

‘And tell my youngest brother
He can have my rifle
To fire at the soldiers on the mountain road,
But not to aim it at the children,

‘And tell my mother to wear black
And carry the missile’s fin,
Because the kid she kept from the cold
Has eaten the white man’s sin.

‘And go and tell John Key
Sitting in Wellington,
However long he scrubs his hands
He’ll never get them clean.’