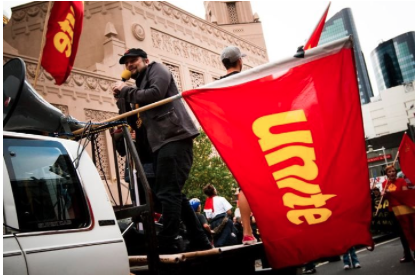 Some attacks on Unite
As mentioned earlier, there was some sectarianism towards Unite at the beginning by some Labour Party members and union officials. In a very few places, ourselves and the SFWU “compete” for the same membership – at one hotel, the Casino and two security companies. That inevitably involves some friction, but we do joint agreements at the hotel and the Casino without major problems.
Right wing bloggers have focused their attacks not on what we do but on the alleged tax problems we have.

Unite was formed with no financial resources. We spent before we received fees. We always had an ambitious growth strategy. We occasionally hired new staff optimistically in anticipation of growth. Matt McCarten formed a company to manage the relationship with Te Wananga o Aotearoa which made a profit and was able to subsidise some of our activities. Unfortunately, Matt fell very ill with two different cancers from which he was not expected to live. Some of the projects subsidising Unite fell by the wayside. Matt actually had a life insurance policy which had the union as a beneficiary, and needless to say, financial affairs could not be top priority for Matt at the time.
Rather than sack staff, we let a debt build up with the tax man for a period. That has since been repaid. We still have an overdraft, but our accounts this year show assets exceeding liabilities for the first time in our existence. We have an income of over $1 million in fees and close to half a million dollars in benefit fund contributions. Income exceeds expenditure and the overdraft should be eliminated early next year. Without the tax issue to try and damage our reputation, the main right wing blogger, “Whale Oil”, has been reduced to a pathetic criticism that our current fee structure penalised the poorest members because we had a minimum fee of $2 a week with a 1.1% rate up to $5.75 a week maximum in companies where we have a collective agreement. This is a modest fee structure in anyone’s language. He also ignored that a large proportion of our members receive additional benefits that non-members do not. This more than compensates many union members for the fees they pay.
2015 – year for secure hours
All the main fast food agreements are to be renegotiated in early 2015. We have told each employer that we expect to make progress on the area of secure hours. We see no way around the issue other than to have some form of minimum guaranteed hours for staff – at least after an initial period of employment. 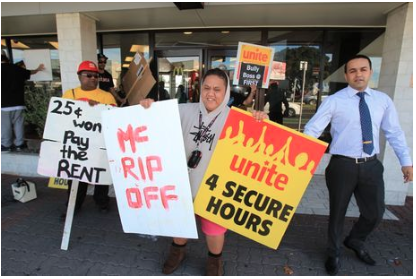 We have clauses in all the fast food agreements that are designed to protect existing staff by offering available hours to them before hiring new staff. But managers often ignore this requirement if they can. To counter this, we have added clauses that hours available must be put on a notice board before staff are hired. Other clauses allow the union to get involved and have access to information needed, like rosters, to determine if the shift allocation is fair. But we still find these clauses being violated again and again. It is almost impossible to police effectively unless the store has a very good union culture. Some do, but they are the minority. Guaranteed hours seems to be the only solution. We are fortunate that other unions are waking up to the danger of what have been dubbed “zero-hour contracts”. It is possible that we can fight this scourge of the working class as part of a broader union campaign.
If the government changes in the election scheduled for September 20 this year, we will be in a much stronger position. The opposition parties have proposed to raise the minimum wage from $14.25 to $15.00 before Xmas and to increase by another dollar on April 1, 2015 – the usual date for minimum wage changes. We simply have to make sure the margins are applied above the minimum wage which sets the start rates in our contracts, and then focus on improving the hours workers obtain. It is the hours of work, as much as the rate you get paid, that determines if you can pay your rent.
What lessons can we draw from the Unite experience
Unions need new approaches to succeed in the kinds of industries we’re talking about. The traditional approach of recruiting union members one by one over a prolonged period can’t work in these industries because the boss can find out where that’s going on and bully people out of it. Workers often aren’t in these jobs for long enough for that slow accumulation of union members to work or make a difference. You need public, political campaigns that provide protection for workers and gives workers confidence you mean business. The union has to be framework for workers to find their voice and lead struggles. 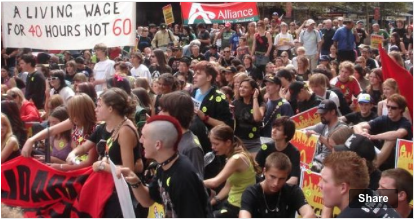 Sit down on Queen St, Auckland, during “SupersizeMyPay” campaign
It has to be all-or-nothing. “Supersize My Pay” was a public, political campaign against the fast food companies which exposed them as exploiters in any way we could. We went after their “brand” which they value above all else. We brought the community in to give public support and prevent victimisation. When those approaches gained momentum, workers started to gain confidence that maybe the risk of standing up for themselves is worth it. That’s the key question – how do you build that confidence?
The campaign needs ambitious goals to make the fight worthwhile. It also needs to combine an industrial campaign with a political campaign around issues like lifting the minimum wage and getting rid of youth rates.
Our modern, industrial unions emerged decades ago out of new models of industry-wide organising which broke away from the narrow craft unions of the day. There are some major differences in size between the industries where those unions were based and the key economic sectors in western countries today–such as retail, service and finance. But a large call centre in New Zealand might have 500 workers or more — which in New Zealand terms is a pretty big workplace. McDonald’s employs almost 10,000 workers – it’s one of the biggest private-sector employers in the country. Those workers are young workers, migrant workers, semi-casualised workers. Those are the people producing profit for the capitalist class in New Zealand today. That’s the working class!
The bottom line is that organising in these industries, where more and more of the working class, and particularly the young working class, in western countries is now employed, has to be done — by any means necessary.
What has Unite achieved?
One of the principle achievements of the Unite effort over the past decade has been maintaining an ongoing, organised presence in industries that suffer a huge turnover of staff. Annual turnover of staff in the industries we represent was, until recently, 100%. It has dropped somewhat due to the 2008-10 recession. Our membership turnover is similar. We have to recruit 5000 members a year to maintain our current size of 7000. Unite is a fast food union. 3500 of our 7000 fee-paying members are fast food workers. The important thing to note however is that we have succeeded in doing it year in and year out in industries like fast food for almost a decade.
We also have a contract with the largest casino in the country. We have contracts with the two biggest hotel chains (Accor and MCK) in the country. We have expanded our presence in security and call centres.
We invest significant resources to having an annual national delegates conference of 150 mostly young fighters from around the country. Union officials from unions representing workers as apart as teachers, public servants or bank workers have praised Unite for giving many of their members a positive first taste of unionism.

Unite National delegates conference 2012
Major challenges remain before us. Can we extend our presence in the fast food industry – especially the franchise-dominated companies? How can we deal with the problem that hundreds of Pizza delivery drivers are on self-employed contracts which we cannot legally represent? What new sectors can we look to for an organising drive? Can we resolve the contradictions between what is dubbed a “servicing model” versus and “organising model” in high turnover industries? Does Unite have a “model” at all beyond doing what seems to work?
It is true that we have had some special circumstances working in our favour. But we still have to convince thousands of young workers in a 24/7 business to join a union and pay fees by speaking to them and getting them to sign a membership form. We have done this with no financial help from the broader union movement. We did it with volunteers, credit cards and low paid staff, when we could even pay. It a success worth celebrating and where possible emulating.
Unite is also now not alone in doing this type of union building in New Zealand today. First Union in particular has used many of our campaigning techniques (and some of our former staff!) to launch successful recruitment drives in major non-union retail chains like The Warehouse and the Pak ‘n’ Save supermarket chain.
A rejuvenated labour movement with the unions at their heart is vital for the future of the working class. To be successful, we need to become a social movement that has a radical critique of the system we live under, a strong social justice program, and inspiring methods to challenge and change the unequal and exploitative society we are forced to live under today. Unite remains committed to playing its part in sowing the seeds for the regeneration of a labour movement that can play its natural role as leader of a society-wide movement to change the world for the better.