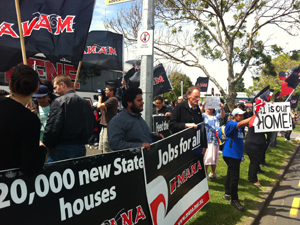 There are times when there is only the option of street protest to change a disgraceful decision and this has come for the people of Mangere who are strongly opposed to yet another cheap booze outlet in their community – right across the road from a big local school – Southern Cross campus.

The decision to approve the outlet was made this week by the Auckland District Licensing Committee and it’s incomprehensible.

Why has community opposition been overruled in such a cavalier fashion by a trio of committee members who don’t live locally? They say the outlet has agreed not to sell alcohol between 3pm and 4pm each day as children leave the school. How pathetic is that? The local kids and their families will tell anyone that that will make no difference. The community doesn’t want another cheap booze outlet – full stop.

And just where have these well-paid, booze-approving people been in the last 10 years or so as strong community opposition has developed to the proliferation of alcohol outlets, pokie machines, loan sharks, fast-food joints, legal highs etc in low-income communities?

Opposition to these parasites on poverty has been led by local communities themselves who are sick of picking up the pieces from broken families. They are fightting back against National and Labour policies which have allowed them free rein to suck the lifeblood from whole areas of New Zealand.

Pokie machines reached their peak under Labour in 2003 when no less than 25,000 machines plundered communities. Community action since then has reduced these to under 20,000. It’s a start but still a long way to go.

Labour refused to legislate against loan sharks during its nine long years in government despite the overwhelming evidence of their destructive impacts on families. National has promised to legislate but we are still waiting five years later. They don’t care.

The most important lesson in all this is that communities can’t rely on MPs or elected officials. They have to take action themselves and this is what is making the difference.

Where has any elected MP from a low-income community led the charge to close booze outlets, get rid of pokies, stop synthetic highs or close down loan sharking or oppose fast-food joints? Not a single one.

Communities have been on their own against these intrusions.

Last year the Mangere community under the leadership of ROCC (Respect our Community Campaign) fought and won an historic victory to stop Gerry Brownlee’s big motorway carving through the heart of their community.

It was a fantastic victory.

And remember it was grassroots community opposition around the country which got the ban on synthetic highs – not MPs.

It will be the same with this proposed new booze outlet outside Southern Cross campus.

The Mana Movement will be joining the Mangere community on Saturday morning to protest this decision. We hope Labour and the Greens will do the same.

See you all there on this Saturday at 10am on Wickman Way – across from Southern Cross campus.

It will be democracy in action when elected representatives have failed.