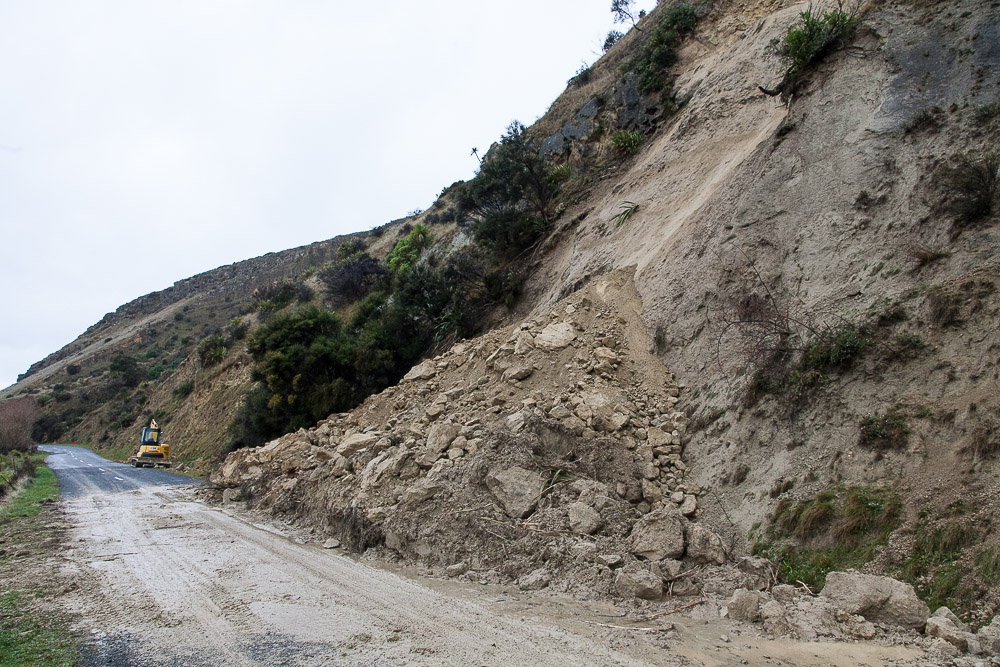 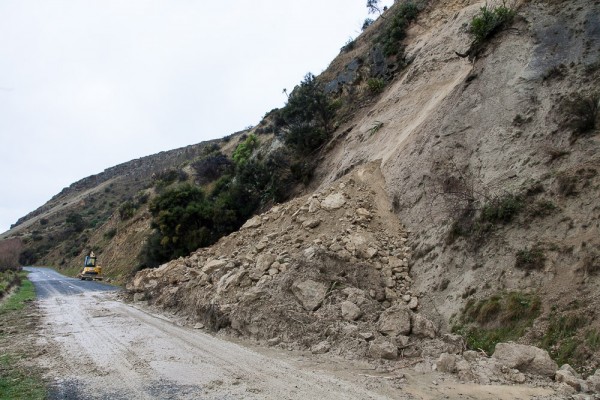 Extreme weather is where the climate change rubber hits the road, and I’ve had enough of it. Unfortunately, it looks like there’s lot more to come.

Last week it rained in Waipara and North Canterbury. Rather a lot. The weather system that brought record winds and rain to Auckland delivered 130 mm of rain to my little farm over Tuesday and Wednesday. The Waipara River, which normally pootles past us at around a cubic metre per second hit a peak of 257 cumecs on Wednesday. On Tuesday night State Highway One was closed by flooding between Amberley and Woodend, with no diversion possible. Christchurch was cut off from the delights of Waipara wine. Overnight, two large slips blocked the road between us and civilisation (civilisation’s loss, obviously), washouts undercut the road edge in three or four places, and a large section of tarmac slid 20 cm towards the river below. For the last week, we’ve had to drive past road closed signs to get in and out of our property.

Driving under the face of Mt Brown, the hill that looms majestically over our place, has felt a bit like dicing with death. If you could see the size of the rocks that came bouncing down over the road last week, you’d feel the same way. Some of them were the size of a family fridge, and they’re now on the riverbank – which is where our car would be if one of them had hit it.
When I walked the bounds of our property on Wednesday I discovered that the rain had washed out a track down to the river, eroded a gully headwall back into one of my truffieres, cut a fence line, and caused a major slump of the limestone cliff on top of which we live. A pile of raw rock and rubble now fills half the river bed below us.

But 130 mm of rain in 36 hours is not unheard of in North Canterbury. My records, which stretch back 17 years, show we’ve had several rainstorms of the same sort of size in that time. None of them has been remotely as damaging as this one. But none of them has come on top of a record wet autumn. We had 113 mm of rain in March, 161 mm in April and 43 mm in May — our wettest autumn by a fair margin. It was Christchurch’s wettest autumn since records began. When the rain started last week, it had nowhere to go but to run off the hills and into the rivers. Floods and erosion were the inevitable result.

Floods are not the only extreme weather we’ve had to put up with in the last 12 months. Back in September, we were on the receiving end of damaging gales — the worst since the 1970s. The hills behind us registered gusts of 230 kph. We were without power for six days, and I still haven’t finished chainsawing all the bits of tree strategically piled around the place. More norwest gales in December ruined the fruit set in our olive grove. Now the sodden soil is placing my truffle harvest at risk, and I’m getting a bit fed up.

Just another small farmer moaning about the weather? Perhaps. But my experience is not unique. My neighbours are starting to notice just how weird the weather is getting. I do not need to bring up climate change, everyone is noticing just how different things have been — how volatile and unreliable and damaging to daily life.

The sad fact is that it’s only going to get worse. Not just in North Canterbury, but in New Zealand and the rest of the world. Because the oceans act as giant heat sinks, the climate we’re getting now is being driven by the greenhouse gas levels of 30 years ago. CO2 was at 344 ppm in 1984. It’s now at 400 ppm, and we ain’t seen nothing yet. The heat that has been accumulating in the system will drive weather ever wilder. Not everywhere, and not all the time, but when bad weather arrives it’s going to get worse and worse.

There’s nothing we can do but batten down the hatches and try to endure the coming decades, but if we cut emissions steeply and soon, we can stop the very worst from happening. Given the weather that has battered us in the least year, I shudder to think what the angry climate beast has in store, but I know it’s worth doing a great deal to avoid what will happen if CO2 is allowed to increase unabated.