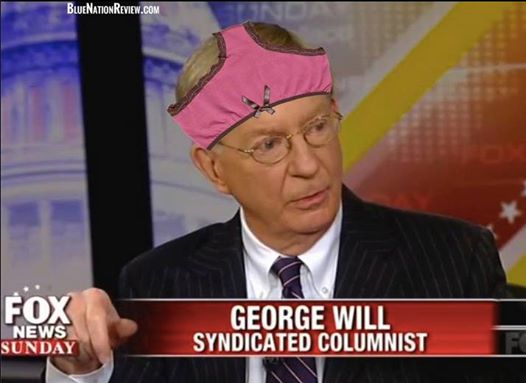 The conservative journalist George F. Will who is a walking, talking Republican stereotype, has managed to infuriate a lot of feminists and survivors of violence this week when he recently posted an editorial editorial in both The Washington Post and The New York Post. He claimed being a survivor of rape on college campuses is now some kind of “coveted status that confers privilege” to the point where “victims proliferate.”

In Will’s world, where he sounds like a Fox News anchor on overdrive, being a rape survivor actually gains you privileges. In fact, he believes women on college campuses want to be raped so they can gain some kind of magical rape status. In other news, unicorns exist. And The Washington Post paid Will to write this hyperbole?!

Will’s editorial claims the rape epidemic on college campuses, a phenomenon that Time Magazine recently covered extensively, is just part of hook-up culture and young women having drunken regrets in the morning, and in turn cry rape.

Apparently there is no end to some people perpetuating rape myths. Fact: it is estimated only 2-8% of all rape complaints are falsified. And yet the widespread myth that some diabolical women have created a plot to destroy the lives of young men everywhere by crying rape is, evidently, alive and well.

It is clear that Will has undertaken a count of zero interviews with rape survivors or people who work in supporting those who have survived violence for his editorial. If he had, he would have learnt what I have known since I was a young girl; rape is not fun. Rape is harrowing. Rape is soul destroying. Rape is a horrific violation. Rape is not a status symbol. It is silencing.

Will, in his editorial attempts to “debunk” the 1 in 5 statistic relating to rape survivors, said:

“The statistics are: One in five women is sexually assaulted while in college, and only 12 percent of assaults are reported. Simple arithmetic demonstrates that if the 12 percent reporting rate is correct, the 20 percent assault rate is preposterous.”

Will provides no real evidence to back up his own preposterous claim; he has clearly gone to great lengths to ignore the staggering weight of evidence that rape is not only epidemic on college campuses but around our world. Last month the New York Times reported that the Obama administration released “…guidelines that increase the pressure on universities to more aggressively combat sexual assaults on campus.” Obama himself has condemned campus rape and has created a task force to combat the problem.

The reality is that an estimated 20-25% of women who attend college in America will experience sexual assault. The number of male victims is unquantified. The Guardian recently asked students on campuses to recount their experiences in reporting rape at universities and colleges. If the words of the brave young women who submitted their stories are anything to go by, as Jessica Valenti of The Guardian wrote, ‘…it’s that survivors of sexual violence are treated abysmally by administrators, peers and campus police. But to someone like Will – who calls this a “supposed” scourge of rape and puts the term “sexual assault” in scare quotes – rape is hardly even a real thing.’

How anyone could think a rape survivor, whether male or female, living through the aftermath could somehow benefit or gain privileges from what they have survived, defies reason.

Of course, the republican dinosaur George F. Will and his rape apologia editorial has received a major smack down from the feminist community. When will these conservatives learn that no good can come from spreading lies and disinformation? Activist and feminist Wagatwe Wanjuki pushed back on Twitter with the hashtag #SurvivorPrivilege, which went viral. Wanjuki told Buzzfeed she created the hashtag because…

“I honestly started the hashtag as a way to share my frustration with the notion that survivors have privilege. It’s one of those situations where I felt like I should laugh so I don’t cry, so I used my sarcasm to start a conversation about how difficult it is to be a survivor.”

Thousands of women and men joined Wanjuki on Twitter – using the hashtag to tell their stories; these tweets create a powerful counter narrative to the lies, myths, and misconceptions that survivors face, while also exposing the slut-shaming and consequences that survivors endure when they speak out:

I remember when words and stories like those expressed publicly were something me and my friends whispered to each other in private. Stories of pain and frustration and quiet suffering told over wine and cigarettes and shaking hands late at night. And no, it was not just my female friends telling me their stories; some of my male friends had survived sexual assault and violence as well – they often struggled, even more than my female friends, to find the words to convey the mental and emotional pain the violence had caused them.

Thousands of people are writing their personal histories on Twitter to publicly testify to a culture of victim blaming that minimises rape and the trauma it causes. Only weeks ago the hashtag #YesAllWomen exploded on twitter, in response to the Isla Vista Massacre in which Elliot Rodgers shot and stabbed 6 people near, and on, an American college campus. Many feminist commentators have attributed his actions to his extreme misogynistic views. The #YesAllWomen tag spoke to the misogyny women are confronted with daily and told their stories of violence.

George F. Will may feel there are privileges and status rewarded to those who have survived rape (I honestly cringed as I typed that) but as the blogger Michelle Merritt, who is a rape survivor herself points out, his words are far from the truth:

“Surviving is about living each day even though your best friends, family, co-workers, and random strangers you’ll never meet seem to believe they have a right to decide whether or not you “deserved it.” Surviving is about forcing yourself to block out those who say you were wearing the wrong clothes, in the wrong neighbourhood, out too late, with the wrong people, drank too much, didn’t say no loud enough, or even gave in too quickly out of fear for your life.”

Survivor privilege? The only privilege I can see is George F. Will’s white male privilege and he is clearly oblivious to it. This privilege makes Will feel he has the right to comment, from a safe distance, on rape culture with little understanding or evidence to back up his claims. “Surviving rape is not like surviving breast cancer, Mr. Will.” Merritt wrote, “I don’t get to wear a pretty ribbon or a t-shirt that says I’m a survivor. I don’t get to lift my shirt or bare my scarred chest as a badge of honour. There are no bumper stickers that reads, “Rape Sucks. Fight Like a Girl”…”.

Women everywhere do not secretly wish they could be sexually assaulted so they can gain “rape status” and enjoy the perks and privileges it will bestow on them. It takes a special kind of blind ignorance to hold these beliefs. As Jessica Valenti asserts, “The only ‘privilege’ afforded to campus rape survivors is surviving.”