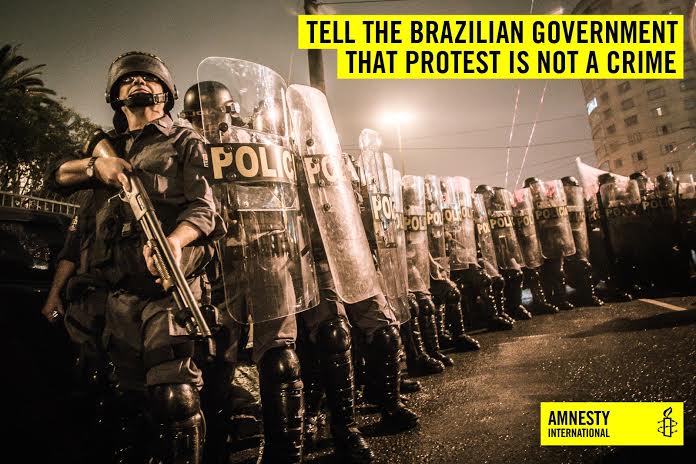 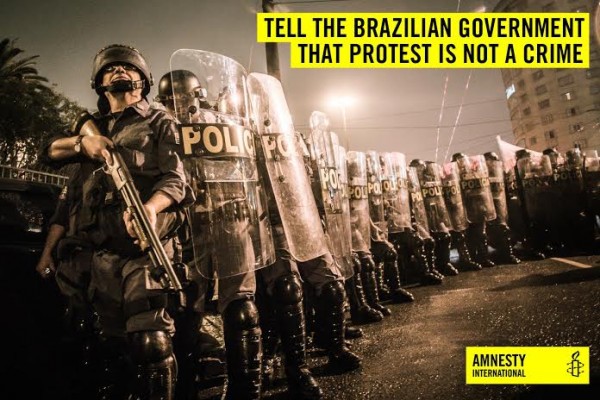 Tomorrow, sports fans around the globe will fix their eager gaze upon Brazil, as the FIFA 2014 World Cup kicks off in a long-awaited and joyous explosion of glitz, glamour, patriotism, and hopefully thrilling athleticism. Among the face-painted throngs of backslapping fans, beer will be chugged, comraderies solidified, and passionate rivalries rekindled.

At their best, sporting events of this magnitude embody and celebrate the nobler characteristics of modern human co-existence… Ethics and fair play. Mutual respect. Solidarity and teamwork.

At their worst, these events expose an uglier side of humanity and the forces that govern. We witnessed it at the Sochi & Beijing Olympics, we are increasingly witnessing it in Qatar, and now Brazil is succumbing to the same unfortunate narrative.

A climate of fear, repression and brutality has emerged in Brazil as authorities prove they will stop at nothing to ensure that FIFA’s festivities go off unhindered.

The Government’s $11b expenditure on hosting the World Cup motivated hundreds of thousands of people to take to the streets in protest of their leaders’ questionable priorities. Citizens have demanded solutions to a number of Brazil’s existing civil and social issues, including inadequate public services and transportation, forced evictions, and widespread crime.

The retaliation of Brazilian authorities has been anything but ‘fair play’.

Last week, Amnesty International released a report highlighting that thousands of peaceful protesters are falling victim to violent forms of repression. Military units have shot tear gas at demonstrators without hesitation, reportedly even inside a hospital. Rubber bullets have been fired into large crowds with reckless disregard for civilian safety, causing severe and lasting injuries. Men and women have been viciously beaten by police with batons, sometimes simply for being in the wrong place at the wrong time.

To date, there is no evidence that any military personnel or police officers have faced disciplinary measures for this obvious and excessive brutality.

Worse still, a proposal for new counter-terrorism laws is currently being discussed by Brazil’s Congress. If passed, the bill could see activists and political demonstrators swept under its broad definition of terrorism, allowing even greater impunity for police and military forces.

For now, the onus lies with the Brazilian government to reverse these draconian measures and protect their people, both during the World Cup and beyond.

Instead of passing stricter laws which repress and punish dissent, Brazil needs to develop a properly trained security force which is capable of policing demonstrations cleanly and in accordance with international human rights standards.

Better systems of accountability are also urgently required so that those overstepping the boundaries of their authority can be brought to justice.

However, there are important lessons for FIFA to take home from this debacle too.

Brazil’s escalating violence has added yet another crimson stain to the association’s already bloodied hands.

In Qatar, hundreds of migrant workers have been exploited in the early preparations for the hosting of FIFA’s 2022 World Cup, with reports that some have even lost their lives. An Amnesty International investigation released in late 2013 has provided a shocking insight into these human rights abuses, which are set to rise exponentially with FIFA bolstering the country’s construction sector. There are fears there that the death toll could reach thousands before the actual event begins.

I believe FIFA, the IOC and all sporting bodies have a clear humanitarian obligation to speak up, voice loud and consistent objections to violations of workers’ rights, repression of dissent, and demand positive change in countries they choose to host global sporting fixtures.

More importantly still, international sporting bodies such as FIFA need to ensure that for future events host countries meet a much stricter set of criteria which will guarantee the protection of all human rights. Their governing bodies must do everything they can to assess participating countries and the ramifications that could arise from these selections.

For spectators worldwide, the upcoming weeks promise to deliver some truly brilliant and breath-taking sporting moments. I hope that one day everyone involved can enjoy these games with a clear conscience, but until then we should not just be screaming for our favourite players.

Instead, each and every fan should be demanding that FIFA and its host countries start making human rights an immediate priority. Until things change, and change drastically, we are all desperately needed on the same team.

Take action: Give the Brazilian Government a Yellow Card: