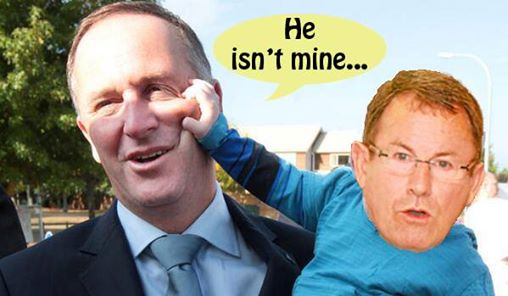 As a polarising figure with a ‘rags to riches’ story, John Banks has certainly made his mark on New Zealand history. Even without his conviction for ‘knowingly filing a false electoral return’, John Banks has courted controversy and been deliberately offensive to many sectors of society.
He’s an enigma – how could a racist, homophobic, anti-abortion ranter, paradoxically befriend stray cats and defend the rights of animals against experimentation? A man so seemingly hostile to other people, but compassionate to other species.
He’s a man of a significantly forceful personality – some would say a bully- who has used his position of power for 34 years to foment division, dissent, and a conservative moral agenda. Meanwhile his support for neo-liberal economic policy found an expedient latter-day home in the flailing ACT party at the last election. His dodgy stunt to stitch up a pre-election deal with John Key over a very public cup of tea, and usurpation of the leadership of the ACT party gave this marginal party a pivotal role in propping up the National Government’s flimsiest of majorities.
As a one-man band representing ACT in Parliament, he had a nominal policy manifesto to guide him – though obviously his overarching role was to support National when it came to the vote in Parliament. How many more years might we have had to contend with his politics of hate had not the persistence of Graham McCready and others borne fruit.
The New Zealand public are right to question the initial refusal of the police to pursue his electoral dishonesty. Especially since the police apparently had no such qualms about blustering into Kim Dotcom’s mansion with guns abreast on behalf of American movie moguls (Some of whom were also supported by the National Government with hefty subsidies). Some might say Banks’ failure to declare the source of his electoral donations (ie he lied), was a misdemeanor that didn’t warrant a police prosecution. But the same standard wasn’t applied to Bradley Ambrose’s taping of Banks’ and Key’s tea pot conversation. And it’s those double standards which unfortunately undermine the perceived independence of the police.
John Key continues to stand by Banks as a ‘trustworthy and honest’ man. The courts have found otherwise. How humiliating it must be for the once-proud (too proud?) Banks to have the word of his once friend, now enemy, Dotcom accepted over his own.
Some commentators say that this ‘fall from grace’ for committing a minor ‘technical crime’, is an ‘unfortunate end to a long and illustrious political career’, and that he deserves compassion. Others might say that to fall from grace, one must first have had some – which in this case is arguable, and because of his past treatment of minorities, which so obviously lacked the compassion he extends to unwanted cats, he deserves all he gets and more.
Now that he’s signaled his resignation, may the whole sorry chapter come to an end. We are well to afford ourselves the grace and compassion to wish him good bye.