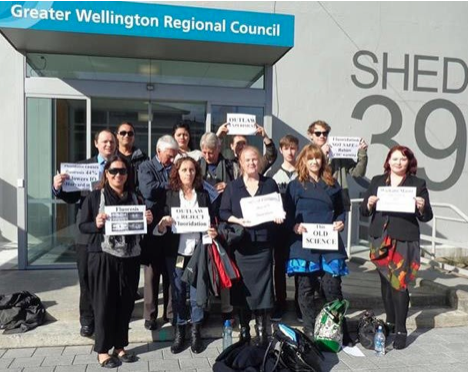 Are ducks somehow connected to the anti-fluoridation  movement? Sure – they do have unsinkable rubber ducks in common. But I am thinking of how media coverage of anti-fluoridation activity and the opening of the duck shooting season peaks annually about May.

The seasonal airing of the fluoridation issue is directly connected to council timetables. Councils consider and decide on their draft annual plans about that time. And of course anti-fluoridation activists take advantage of this to make large numbers of submissions and to dominate council hearings on the plans. That’s not to say these activists are inactive the rest of the year. There are submissions to prepare, supporters to mobilise and the never-ending promotion of their unsinkable rubber ducks – misinformation about fluoride.

Anti-fluoride activists have become council “groupies.” They are familiar with council planning and conscious of any opportunity to present their case. Aware that numbers can impress councillors they help supporters with submission templates (templates A, B, C, D, were used in Hamilton) and submission guides. In contrast the ordinary citizen is rarely conscious of what is going on in their council. For example, the first most Hamiltonians heard of the “Fluoride Tribunal” organised by the Hamilton City Council last year was a news report of the council vote to stop fluoridation!

As for making oral submissions – most of us have to work during the day but it seems the many of the anti-fluoridation activists have the luxury of self-employment or jobs providing plenty of free time for activism. Many submitters seem to be in the “natural” or “alternative” health industry – naturopaths, homeopaths,  craniosacral and neuromuscular practitioners, meridian kinesiology therapists, etc. – which seems to provide plenty of time and ideological committment for their activism.

Currently the anti-fluoride organisations aim to get councils to hold tribunal-type hearings and they argue strongly against democratic involvement of citizens via referenda. This tactic was very successful last year when a one-sided tribunal effectively captured the Hamilton City Council leading to a decision to stop fluoridation. A citizen backlash led to a referendum which confirmed overwhelming support for fluoridation and the Council reversed their decision.  Anti-fluoridation groups have responded by using legal action to delay the return of fluoridation. They have yet to win a legal victory but seem to have enough finance from the “natural” health industry to use appeals to delay decisions (see Who is funding anti-fluoridation High Court action?)

What a difference a year makes?

Ironically, the very success of the anti-fluoride groups in Hamilton and news coverage of their success seems to now be undermining their current activity. Citizens are becoming becoming more aware of their tactics and the fact their propaganda misrepresents the fluoride situation.

Whereas last year anti-fluoride activist submissions dominated the Hamilton fluoride tribunal, pro-fluoride submissions to the Kapiti District Council this year were the majority and many of these seem motivated by concern about activists misrepresenting fluoridation (see Water Management/Water Supply/Fluoridation WPR – General for a summary of the Kapiti submissions).

This may be why the Kapiti District Council this year voted to keep fluoridation by 8 votes to 2 – last year the vote was 5 to 5.

Another reason for recent media attention has been the publication of a New Zealand study checking for a relationship between fluoridation and child IQ. Mind you, the fact of the publication was not the main reason for attention. More media coverage was obtained by anti-fluoridation activists (in NZ and the USA) attacking the publication. Some of those attacks on social  media have been nothing less than defamatory.

For several years now anti-fluoride propagandists have been promoting the myth that fluoridation lowers child IQ relying mainly on a review of poor quality research in China, India and Iran. This year essentially the same authors cited themselves in another review (see Quality and selection counts in fluoride research and Repeating bad science on fluoride for analyses of these papers and the work they rely on).   Because some of the authors were associated with the Harvard School of Public Health, and the second review was published in The Lancet, these propagandists have resorted to the “authority fallacy” and swamped social media with headlines like:

The headlines are often simply linked to, or sourced from, “alternative” or “natural” health magazines and websites, known “woo” experts like Joseph Mercola, or quack organisations like the International Academy of Oral medicine and Toxicology. The activist’s version of this story has been fed to scientifically naive councillors via large numbers of submissions “prepared” by people who have not even read, let alone critically and intelligently assessed, the original papers.

Expert consensus is that this Harvard review is irrelevant to the debate because it considered concentrations well above those optimum for fluoridation and did not consider confounding effects like education, breast-feeding, social economic position, etc. In contrast, the NZ work looked at the influence of these confounders using data from the internationally acclaimedDunedin Multidisciplinary Health and Development Study.

The New Zealand study found no significant differences in IQ because of fluoride exposure (fluoride tablets and toothpaste were also considered). However, childhood socioeconomic status, breastfeeding, low birth weight  – confounding factors not considered in the work reviewed by the Havard group – were associated with childhood IQ.

Association of educational attainment with adult IQ was also statistically significant. Interestingly, adult IQ was higher for people exposed to community water fluoridation long-term  than those not – a direct opposite to what the anti-fluoride people argue. The authors, though, warn against arguing such a positive effect for fluoride – again because of confounders:

“This may be due to better educational opportunities for those who resided in the fluoridated city of Dunedin over the long-term than those who did not.” 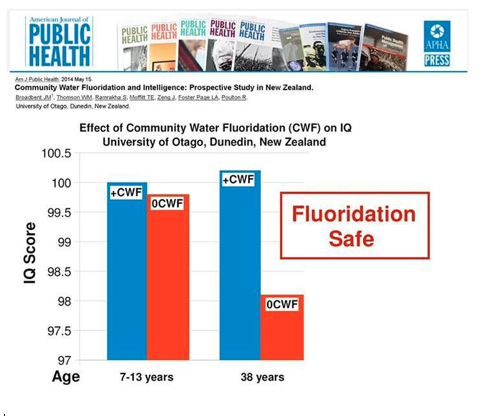 So, it is very likely that any relationship between fluoride in drinking water and IQ reported in the poor quality studies reviewed by the Havard group resulted from confounding factors that weren’t considered – at least at the lower fluoride concentrations. Because many of those studies involved high fluoride areas were severe dental fluorosis and skeletal fluorsis is common there is always the possibility that these diseases produce learning difficulties influencing IQ. I imagine poor teeth, whether due to bad decay or severe fluorosis, make learning difficult for children (see Confirmation blindness on the fluoride-IQ issue). Poor oral health is likely to inhibit learning with New Zealand children but severe dental fluorosis is not caused by fluoridation and is not an issue in this country.

The fluoridation controversy in recent years shows how scientifically naive councillors and local body staff can be exploited by ideological motivated activists. On the one hand this demonstrates the need for supporters of evidence-based health to be more attentive to local body politics and more active on countering such exploitation. On the other hand councils seem to recognise they do not have the skills required to consider such issues and are appealing for central government to take on responsibility for fluoridation decisions. Given the attitude of the present government councils are unlikely to get their wish soon. Perhaps they should recognise the responsibilities they currently have and take steps to ensure more rational consideration of this issue in future.

In my view the authors of the Otago study made an important comment on the implications of their work. They concluded their paper with:

“Substantive research and quality data are required for addressing important public health issues. In New Zealand, it has been recommended that New Zealand government departments should employ a designated research-literate staff expert to interpret science for the benefit of politicians and our study suggests that local government organizations could benefit from the same. Scientists and policy makers should be reminded of the necessity of caution in attributing causality when evidence for it does not exist.”

Note: For readers wishing to read the original reports of the New Zealand fluoride/IQ research there are current 2 papers published:

Ken Perrott is the respected editor of very excellent open parachute on SciBlog. Sciblogs is an initiative of the Science Media Centre, an independent source of expert comment and information for journalists covering science and technology in New Zealand.