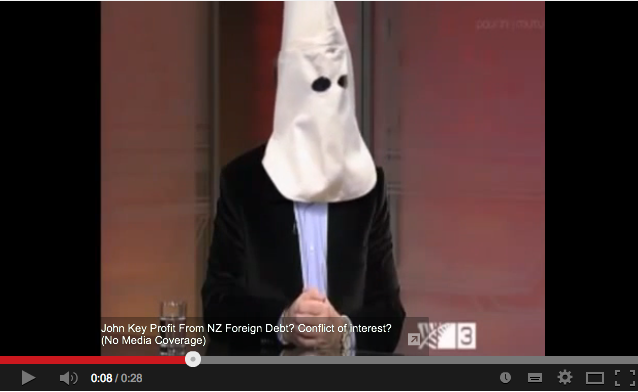 I’ve been asked by a number of people why I’m not jubilantly throwing my hands up in the air about John Banks being found guilty of a pretty serious electoral offence earlier this week.
The reason is simple: Anyone who knows me will be aware that I first got into politics with the stated objective of DESTROYING THE ACT PARTY.
I then concluded, after a chain of events that included surely the most cap–handed backfire–prone coup since Untung in Indonesia… that in the mission of doing fundamental harm to ACT, the ACT Party did not need any help. Particularly when they were left with John Banks as their sole MP, leaving a party of nominal “classical liberals” represented by a man so conservative he /prayed/ in Parliament against the passage of the Homosexuality Reform Act in 1986.

[Ironically, given Jamie Whyte’s apparent leanings, Banksspecifically cited “legalization of incest” as grounds for his furious opposition to the decriminalization of homosexuality]

A friend of mine put it this way: “When I was in Belfast in the early 90’s I asked a friend of mine who was a member of the Provos why the IRA hadn’t shot Ian Paisley to which he replied aghast “Shoot Ian Paisley?!! He’s one of the best propoganda weapons we have.”” For reasons that shall soon become apparent, I feel pretty much the same way about Banks.

Without even getting into the recent court case, it has become readily apparent that John Archibald Banks was one of the single greatest threats to ACT’s ongoing viability.

I mean, seriously. John Banks as 100% of the Caucus of ACT produced such wonderful gems as ACT on Campus declaring they wouldn’t campaign for him dependent upon a vote in the House. Where else could you pay to see the spectacle of a party’s youth wing in open rebellion against its parliamentary Caucus? Particularly when the cassus belli was apparently widespread doubt amidst the more zealous and principled of the ACToid breed that Banks could actually be trusted to give effect to their principles.

Banks’ curiously stringent ideas about drug use (particularly by animals) also made a contribution. First, he single-handedly cost ACT a 2nd MP by shooting down in flames Don Brash’s absolutely inspired off-the-cuff comment-slash-policy-suggestion that ACT would favour the decriminalization of marijuana. There are tens of thousands of “stoner voters” in New Zealand (yes, contrary to the stereotype, stoners are actually a /very/ involved political class – something like thirty four thousand of them turned out to vote for the Aotearoa Legalize Cannabis Party back in our first MMP election in ’96, for instance), as well as many, many more disenfranchised youth who were looking for a place to go.

Given the more than eight hundred thousand electors who didn’t vote last time around, as well … we can really only imagine how much ACT’s share of the party vote would have swollen had Brash been allowed to go ahead with Operation: Electorate of the Long White Cloud. From where I’m sitting, it would have almost unquestionably been enough to revitalize their campaign amidst youth, and grow their vote just enough for Brash to become “relevant” again. (shudder)

The second intersection of John Banks’ “morals” and ACT drug policy concerns the recent Psychoactive Substances Act. For those of you playing at home, this was a piece of legislation designed to create a world first *legal* market in mind-altering substances. On the face of it, voting for this legislation would be /everything ACT is about/. It’s got free-market capitalism! Dubious (and ineffectual) intervention by the state in the marketplace that’s best described as “hands-off”! Kiwi entrepreneurs making cold hard cash by slanging products that rational consumers were making informed decisions to put into their own bodies! Selling out our young people for a quick economic boost!

And yet, Banks somehow managed to earn his place in history by being the only MP principled enough to actually vote against the legislation. Admittedly, he did so out of a concern for animalsrather than a concern for Kiwis (there’s just something about him thundering on about “sacrificing Beagle puppies at the altar of recreational drug use”) … but that’s only added to the legend. The Green Party tabled an amendment to the PSA to try and protect animals (then voted for the legislation anyway when said amendment failed). Banks actually had the balls to vote against the legislation. Alone.

For that, I guess we have to salute him.

It was kinda sad, though, that the same iron inflexibility of principle wasn’t demonstrated by Banks over the convention-center-for-pokies deal. It took him just over a decade to go from declaring that casino operators were “wideboys, they’re flashboys, they’re big boys and they can take it”, on grounds that “the little people of this country have been sucked, hung, drawn, quartered, bled by these people in these casinos” through to accepting generous donations from SkyCity to his mayoral campaign … and then voting to allow said casino operators 230 additional pokie machines for the assumed purpose of further sucking dry, bleeding hanging, drawing and quartering those same “little people”.

We also had the absolutely awesome spectacle of John Banks’ speech during the Debate on the Prime Minister’s Statement earlier this year. Not content with telling Hone Harawira that he knows nothing of child poverty, Banks then set out “unconditional love” and charter schools as a surefire path out of poverty apparently more effective at poverty eradication than “welfare” or “big government”.

“There’s no votes in representing people with no hope”, indeed.

And when you put that together with Banks’ previously announced views about the criminal tendancies of Maori and Pasifika youth … well, it really displays why we loved John Banks so much in the first place.

Every time we wanted an emblem, an avatar or a symbol for the pernicious, corrupt and dehumanizing impacts, mechanism and effects of neoliberalism … there he was. If we wanted an example of how ACT and National treat our poor as a political inconvenience … there’s that quote. If we needed a way to demonstrate the casual and implicit racism that drives some on the right-wing of our policy elite … here he is. If we desired a handy-dandy put-it-on-a-postit-note quote that demonstrated just how limp-wristed, hand-wringing and vapid the neoliberal effort to understand poverty and criminality as moral, rather than economic failures … surf’s up.

It was an absolutely delicious long-running farce, with the most serious criticism I’m able to mount of the enterprise being that the whole tottering edifice was, appropriately enough, a fulsome waste of taxpayer money to keep operational.

Oh, and also that Banks is, if anything, too easy an ACT to follow. (apologies)

The two guys who’re coming in to replace him (Whyte and Seymour) are in some ways different to their illustrious predecessor, and in some ways the same.

They’re all three of them figures who seem to just axiomatically lend themselves to ridicule while presenting as so incredibly straight-faced that one almost thinks them a parody. Who could forget David Seymour saying “Hi” (“…Hi; Hi; Hi; Hi”) to “Wemwera” in his absurdly awful campaign video (now a viral hit). Or Jamie Whyte proving decisively that he’s an anti-politician by loudly andrepeatedly declaring his personal views in favour of doing something positive for incest, then having the insane political temerity to “stand by” his comments rather than immediately retract them.

The trouble is, neither is either larger-than-life enough, nor prone to being frankly absurd enough, to actually properly step into Banks’ shoes. When we find ourselves casting about for political stereotypes and archetypes to affix Seymour and Whyte to, the best we’re able to come up with is fresh-faced young careerist (with stupid campaign video) and complete-political-novice mad-libertarian philosophy professor. That’s it. Useful on a tactical level, perhaps; but nothing as epic or epigrammatic as a full-blown Banks tirade about fundamentally misunderstanding the causation of child poverty; ascribing crime on a racial basis to transparently try and scaremonger votes out of the “good people of Epsom”; or the man’s many and various pronouncements in denigration of homosexuals (the remark about six inches of barbed wire being inserted into the anus of a gay man being a “waste of barbed wire” particularly stand out here for outrage points).

Attempts at denigrating ACT post-Banks, therefore, simply don’t have the effectiveness and jocularity associated with the excellent sport of Banks-bashing. At best, we’re left bemoaning hollow men with extreme philosophical positions, and that’s not nearly as fun as grappling with the existential sense of buffoonish political evil that seemed to drape Banks like a cloak.

So why am I not celebrating John Banks being found guilty?

Because there is still an ACT Party. They are still running a candidate in Epsom. They’ve apparently door-knocked thousands of houses already, and are doing their level best to try and rebuild and restore ACT’s (by now surely necromantic) credibility.

And because our problems with the ACT Party did not begin with Banks, nor shall they end with his passing.

There’s now a new “dynamic” duo fronting for ACT, and while I can’t bring myself to type “and we must take them seriously” with anything approaching a straight face … it does seem a little premature to be jumping for joy when there are still ACT candidates in the field – one of whom looks pretty likely to be another ACT MP come September 21st.

Let’s sort that out before we break out the victory champagne.