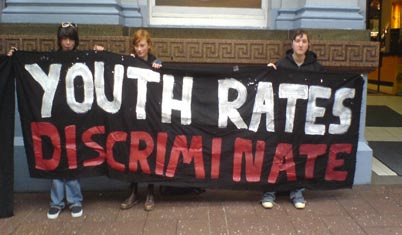 (The following history was prepared as part of the contribution by Unite Union to the international fast food workers meeting in New York in early May. Unions officials and workers were fascinated by the story we were able to tell which in many ways was a prequel to the international campaign today.)

Part 1
Part 2
2005 fast food recruitment drive
Beginning in May 2005, we launched a recruitment drive at all the main fast food restaurants in preparation for the launch of the public campaign. This included Restaurant Brands (KFC, Pizza Hut and Starbucks), McDonald’s (including all franchisees), BK, Wendy’s and Red Rooster (since closed). We negotiated “access protocols” with each company. We had a legal right to access to talk to staff. The companies were determined to keep us from going back of house to talk to staff during work hours, so we accepted the “compromise” that a manager would send each staff member out for a one-on-one chat for a few minutes. We already knew that this “compromise” would enable us to recruit in the hundreds.
We had the assistance of a very smart young volunteer, Simon Oosterman, who brought in a youthful tech-savvy that combined well with Matt McCarten’s political party campaign experience and my own social movement organising. Two other central organisers of the campaign still with Unite today were Joseph Carolan and Tom Buckley. At the beginning of 2006, John Minto – an iconic figure of the anti-apartheid movement in New Zealand – gave up his teaching job and joined the Unite project. As well as his organising and negotiating skills, Minto was a household name and also had a weekly column in the Christchurch daily paper. Minto left Unite in 2012 to concentrate on building the Mana Movement. 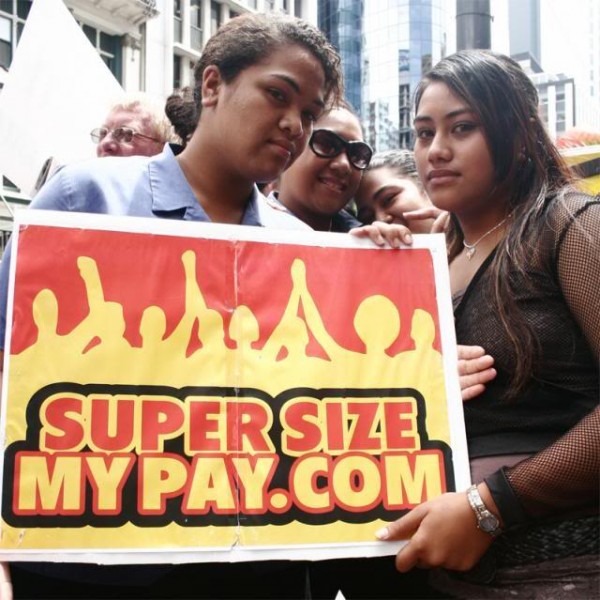 SuperSizeMyPay.Com
Oosterman designed the website and publicity materials that became SuperSizeMypay.com. In doing so, we maxed out our personal credit cards and homes were refinanced. A bus was bought with a kick-arse sound system able to be attached to the roof.
We had identified the 3 key issues for which we would negotiate in each and every collective agreement and which we considered essential:
Within a few months, one thousand fast food workers had joined Unite. The companies didn’t know what hit them when the campaign was publicly launched on November 23, 2005 with “the world’s first Starbucks strike”. We decided to do Starbucks because it would be the company where Restaurant Brands would think we had the least chance to convince workers to go on strike. Partly because of store locations, the staff tended to be bit more middle class and trendy. On the morning of the strike, the company’s chief exec Vicki Salmon went on the main morning radio news programme to be interviewed alongside Matt McCarten. She made fun of the fact that only a “handful” of Starbucks’ “partners” were in the union. So we got hold of a bus and shut down 10 stores in Auckland, bringing all the workers to the Karangahape Road store where we had originally determined the world’s first Starbucks strike would take place. Fair trade coffee was served for free outside that store during the strike. 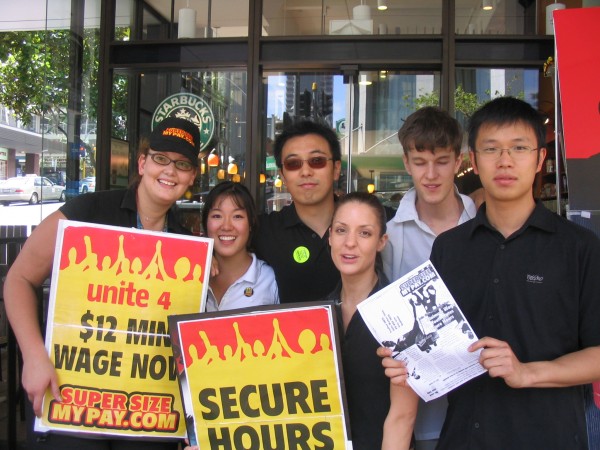 Television news reporters followed us for the day. Simon Oosterman was concerned with “the picture” because the first store was in a mall and TV cameras weren’t allowed inside. But completely unscripted, the union delegate there led his team out a side door of the mall, threw his apron on the ground and announced to the waiting TV crew “I’m on strike”. That image become one of the iconic ones of the campaign. We went after the fast foods’ brand image as well. KFC’s company logo, “Kiwis for Chicken”, became in our campaign language, “Kiwis for Cheap”!
Campaign highlights
This was followed up with dozens of strikes and protests at the fast food companies. The following are highlights. Usually, strikes lasted for an hour or two and only at the busiest times of the day. We didn’t try to “force” all the members to strike as we needed time to build their confidence that they could strike and still keep their job. Overwhelmingly, picket lines were respected by customers, whether walking or driving in. 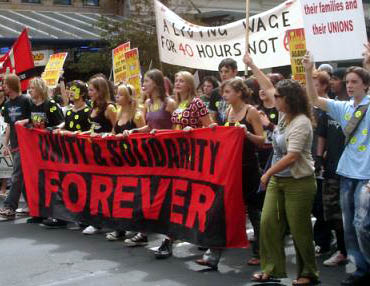 In early 2006, a private members bill to abolish youth rates sponsored by Green MP Sue Bradford was pulled from the hat and allowed to be discussed and debated in Parliament. It helped strengthen our campaign.
A March 20, 2006 high school student strike and march through central Auckland of 1000 students against youth rates. The strike was organised by “Radical Youth” a group based in the high schools and inspired by Unite’s campaign and Bradford’s private members bill. We supplied 20 buses for the different schools to get there. 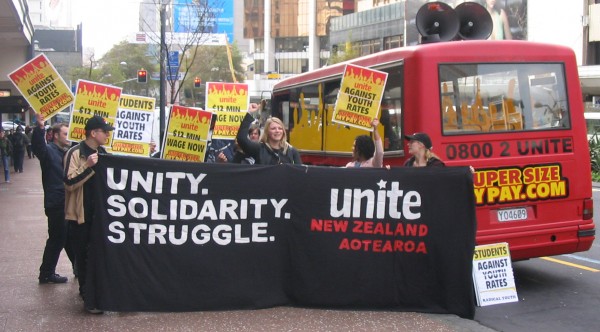 Fast food collective agreements signed 2006
Restaurant Brands sued for peace five days after the high school student strike. We signed an agreement substantially lifting wages and abolishing youth rates over two years. There were strong clauses requiring available work hours to be first offered to existing staff. Breaks were protected. Three-hour minimum shifts were guaranteed. The settlement made front-page news in the country’s biggest daily newspaper The New Zealand Herald. We were strongest at Restaurant Brands because it has no franchise stores; is a publicly listed company, and the KFC stores tend to be in solid working class communities. Restaurant Brands also agreed to pay a union member-only allowance of 1% of workers wages each quarter in recognition that the negotiated contract would be passed on to all staff.
McDonald’s resisted the signing of collective agreements longer and harder than Restaurant Brands. They de-recognised half our initial 800 recruits on a technicality. Rather than go to court over the issue, we simply went out and recruited them all over again. They demanded $5000 to upgrade their software to do fee deductions and demanded we agree to their taking a 2.5% fee on union dues for the trouble they had to go to. 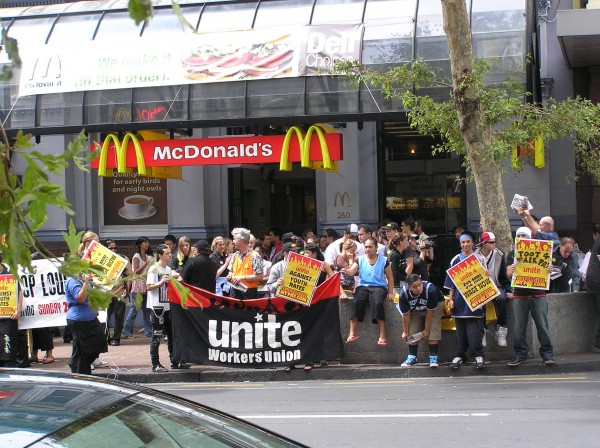 The day of strike action and public protest held on March 3, 2006, was in response to McDonalds’ intention to pay national minimum wage increases to non-union staff as of March 6, three weeks earlier than they were legally required to do so. “McStrike” was the theme of that day as McDonald’s workers from across Auckland joined the Queen Street picket including workers from stores at Royal Oak, Manukau, Glenfield and Wairau Rd. They were joined by 35 fast food call centre workers and Starbucks workers, to say they were proud to be in their union. A letter confirming the company’s position stated: “As advised at the last meeting, it is likely McDonald’s will decide not to pay the above [minimum wage] increases to Unite members. That is simply because franchisees and McDonald’s are concerned that Unite’s industrial tactics have the objective and/or effect of damaging the McDonald’s brand and their business and they don’t see any merit in rewarding that behaviour with a pay increase”.
During the protest, McDonald’s crew trainer and Unite delegate Heni Moeke, representing the first 750 McDonald’s Unite union members, issued the transnational with a legal document charging the company with “unlawful failure to bargain” and “unlawful discrimination on grounds of union membership”. The majority of staff were being paid below the new minimum wage during the three weeks before the new rate became legal and the company hoped members would resign from the union to get the pay rise. They were to be disappointed because few members resigned. With the company under threat of court action from Unite, members received the early minimum wage rise as well.
Union members at McDonald’s had their hours cut or failed “performance pay” reviews. We had to go to court twice during 2006 to try and force the company to meet their legal obligation to negotiate “in good faith”. Their chief advocate, Tony Teesdale, had a reputation as hard man for the bosses and boasted that he had helped draft the 1990 anti-union law. He assaulted an Australian film maker in his office foyer, cutting her finger as he wrenched the camera from her and removed her film.
May Day 2006 became the second Unite and Radical Youth-organised youth protest against youth rates. The action took place in the early evening, after school, and was the largest May Day event in Auckland for decades.
Pickets and strikes continued at McDonald’s wherever possible. In the end, I think the company concluded that no matter what they threw at us we were never going to give up and go away. On December 5 2006, McDonald’s agreed to abolish youth rates and a collective agreement was settled. A modest, one-off, union member-only bonus payment was won as part of the settlement. Clauses on protecting hours of work, a three-hour minimum shift and guaranteeing 15-minute paid breaks were also agreed. The “Terms of Settlement” for the agreement was signed by Matt McCarten and the company in Matt’s hospital room.
Jared Phillips joined Unite in late 2006 and remains with us today. He led the organisiation of the much smaller Wendy’s chain which included strikes at some of their stores on February 25, 2007. A collective agreement was signed with Wendy’s in April 2007.