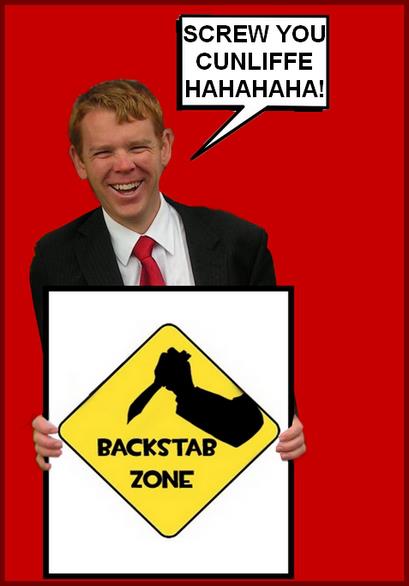 Labour MPs not happy with Mana-Internet

Senior Labour Party MPs have used social media to attack the alliance struck between Mana and the Internet Party.

Former leaders Phil Goff and David Shearer, and Rimutaka MP Chris Hipkins, are among those who have objected to the deal. It could see MPs from Kim Dotcom’s fledging political vehicle enter Parliament on the ‘‘coat-tails’’ of a victory for Hone Harawira in Te Tai Tokerau.

So what Goff, Hipkins, Mallard, Davis and Shearer are really saying is that if the difference is between changing the Government  using a supply and confidence arrangement with Internet MANA or allowing John Key to remain as leader, they would let John Key win???

Would these MPs  cross the floor and join John Key? How far are they willing to take this charade?

Cunliffe has had a peace deal within the factions, and this looks like a clear breach of that peace deal. This move by the Anyone But Cunliffe gang (ABCs) is the sudden realisation by them that Cunliffe intends to win by a grand coalition of the Left meaning their influence will be horribly diminished.

This flexing of muscles and direct challenge to Cunliffe’s leadership is occurring while Labour’s factions thrash out the Party list. This sudden feigned political morality sounds more like the realisation of how far they’re dropping in that list.

How Cunliffe responds will be keenly watched by all. If the Greens are raiding to the Right by using their clever Carbon Tax to woo urban blue-greens, it would be stupid for Labour to double up on that. Better they focus on the missing million with a strong Labour brand than compete again with where the Greens are moving.

The self mutilating ego on display is concerning. Internet MANA is better resourced than the National Party and provides the parliamentary majority. To suggest they are a puppet for Kim Dotcom is farcical when you know Hone, Laila, Annette or John,  and the left are simply exploiting the exact same tactic the Right have used since MMP was created. Get over the moral outrage and focus on the fact many NZers need a change of Government and to date Labour + Greens haven’t managed that.

David Cunliffe will do what is best for NZ, and if reaching across the political spectrum to make an arrangement with Laila and Hone  is what is needed to get rid of John Key, then what kind of leader of the Labour Party would he be if he wasn’t prepared to do that?

The arrogance at their hyper sensitivity is breathtaking and proof that some on the Left would prefer to control the losing team rather than lose control of the wining team.