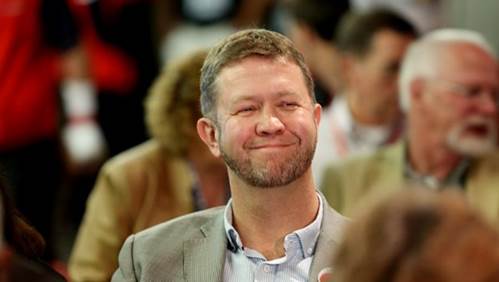 WERE YOU TELLING THE TRUTH, DAVID? When you told your party that the age of neoliberalism was over? That you, alone among all your colleagues, had grasped the meaning of the global financial crisis, and only you could lead Labour to an election victory that would restore New Zealand to itself?

I remember the collective thrill that reverberated through the party conference at Ellerslie when Len Richards told the delegates that it was time to “take our party back!” That’s when the cameras homed in on you, David, seated there in the midst of your New Lynn delegation (not lined up at the microphone to oppose the democratisation of the party like so many of your caucus “colleagues”). And you were smiling, David. You looked elated.

But, were you smiling because Labour’s membership had finally seized control of their party, or was it because you knew that the pathway to the leadership was now clear?

That’s what your enemies said, David. They said you looked like a cat who’s got the cream. And, my, how they rounded on you: accusing you of fomenting a coup against David Shearer. Do you recall the poisonous outbursts of Chris Hipkins? Your demotion to the back benches? The vicious harassment of your allies Charles Chauvel and Leanne Dalziel?

The ‘Anyone But Cunliffe’ faction tried to break you.

But they failed, didn’t they, David? Because, throughout it all, the rank-and-file of the party and the affiliated trade unions remained loyal. And, when Shearer finally threw in the towel, they knew what to do. Over the strenuous efforts of a majority of the caucus, they elected you Leader of the Labour Party. The moral and political lethargy of their MPs had driven the membership close to despair – and you were their Great Red Hope.

So what happened, David?

One of the polls taken at the conclusion of the leadership contest put Labour on 37 percent – placing it within striking distance of 41.2 percent, Labour’s best ever election result under MMP, and just a couple of percentage points away from Labour’s winning Party Vote of 38.7 percent in 1999. You had momentum, David. New Zealanders liked your message. Labour’s social-democratic values were threatening to come back into fashion.

And then everything went quiet. The 2013 conference, which should have been a rapturous coronation, was a curiously strangled affair. Your more radical supporters were “persuaded” to pull their punches on important left-wing issues like the Trans-Pacific Partnership and the age of eligibility for NZ Superannuation. The uncompromising language of 2012’s Draft Party Platform was watered-down to the point of blandness. Doubters were reassured that Cunliffe was still Cunliffe. That it was a matter of priorities. That, for the moment, “party unity” was paramount.

“Party Unity” – is that what this is all about? Party Unity. Of the sort we saw demonstrated last week by the likes of Kelvin Davis, Phil Goff, Chris Hipkins and Trevor Mallard? Forgive me, David, but that didn’t strike me as evidence of a unified party. That looked to me like the ABC Faction flexing its muscles. And you, David. How did you respond to their rank insubordination and strategic stupidity? Did you slap them down? Did you bring them into line?  Like hell you did! You caved. Cravenly and very publicly, David – you caved.

It’s time for you to wise up, David. The voters who thrilled to your election as Labour’s leader won’t take much more of this. Nor will Labour’s left-wing membership. If they had wanted a continuation of the political lethargy and ideological flabbiness that’s characterised their party’s parliamentary leadership since Helen Clark’s departure, then the rank-and-file and the unions would have given their votes to somebody else.

That the Labour Left spurned your opponents was due in no small part to their interpretation of your “The Dolphin and the Dole Queue” speech. They simply assumed that you were readying the country for a Labour-Green coalition, and that this combination would generate a mix of policies well to the left of the caucus’s conservative positions. You can imagine the alarm-bells that started ringing when Labour firmly rejected Russel Norman’s suggestion of a joint Labour-Green campaign effort. Even more alarming was your own use of Winston Peters’ spurious justification for giving nothing away until after the votes have been counted.

In God’s name, man! What do you think Labour is? A minor party! Peters’ uses his “wait until the voters have had their say” line to give himself maximum flexibility when it comes to choosing coalition partners, and to prevent the desertion of his supporters (many of whom are drawn from both the Left and the Right) by stating a clear preference for one over the other before polling day. Are you really telling the world that Labour is now so bereft of ideological confidence and coherence that it must resort to Winston’s opportunistic tactics? Is that how bad things have got? That you need to trick people into voting Labour?

Because if that is the situation, then let me tell you where Labour is headed. It is headed in the direction of entering a Grand Coalition with National. No, don’t shake your head in derision, in many ways the MMP system lends itself to this solution (and in MMP’s birthplace, Germany, there have been a least two Grand Coalition governments since 1947).

Just work your way through it logically.

If the Labour caucus is unwilling to concede ground on policy matters to the Greens; if this is the reason so many of them would prefer to work with the ideologically undemanding Mr Peters; and, if caucus’s antipathy to the prospect of having to deal with Hone Harawira, Laila Harré, Annette Sykes and John Minto is (at least) ten times greater than its hostility towards the Greens; then what will happen if the only government (other than a Grand Coalition) that can be formed when the votes have been counted is a Labour/Green/Internet-Mana Party coalition?

Can you guarantee both your party and your electoral base that the Labour caucus won’t split apart rather than accept the policy consequences of such a radical coalition? Can you tell us that the ABCs wouldn’t do what Labour’s Peter Tapsell did in the cliff-hanger election of 1993 – provide National the margin it needed to govern? If National was shrewd enough to offer Labour the premiership in return for their joining a “Government of National Unity” against “corruption and extremism”, can you promise us you’d turn it down, David. That you’d tell National, Act, Peter Dunne and the ABC’s to go to Hell?

Because I’m pretty sure I’m not the only person wondering why David Cunliffe is suddenly so coy when it comes to the parties and the policies he and his colleagues are willing to embrace. Why they cannot seem to see the obvious electoral advantages of running a strategy of co-operation and accommodation with the Greens and the IMP. Why it is that everybody – apart from the Labour caucus – can see that, from a derisory 30 percent in the polls, Labour cannot get to the Beehive on its own: that it must have allies.

You are where you are, David, because your party believed that you would seek for those allies on the Left – not the Right. And now they’re looking for some much needed reassurance.

So, David, tell them again: why do you want to be Labour’s leader?