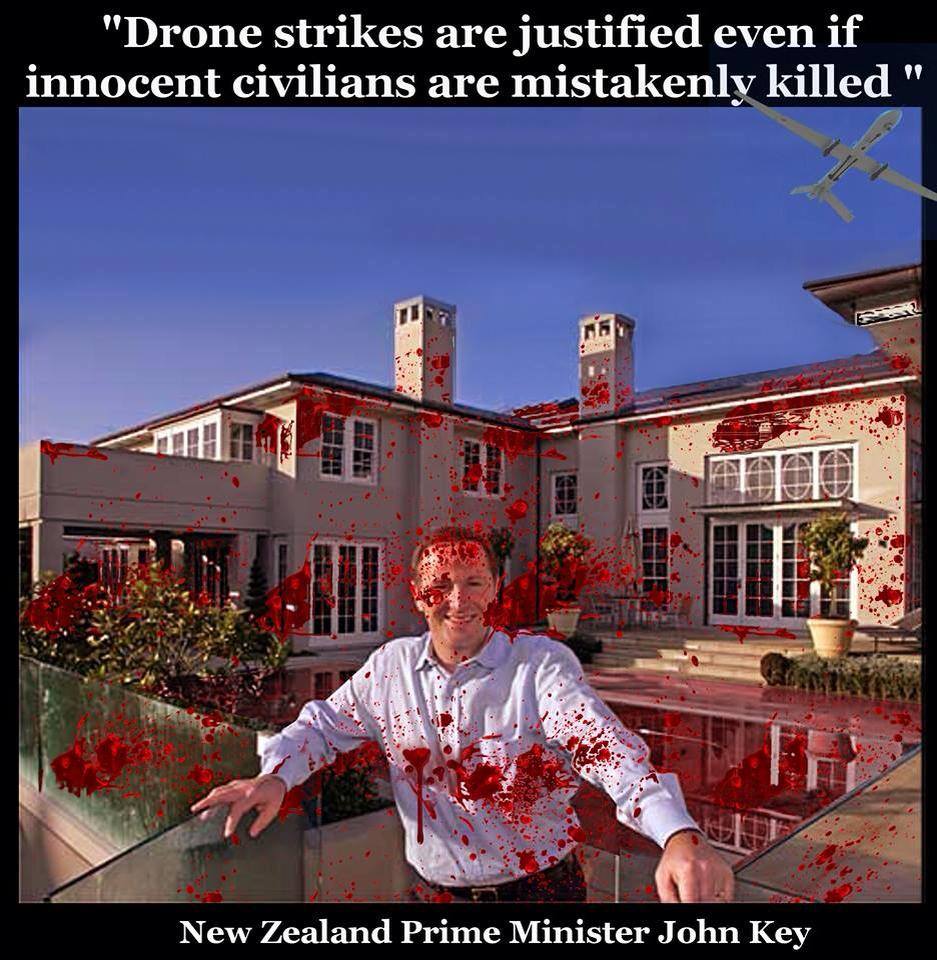 On a quiet evening, in a leafy suburb in Auckland, around forty people gathered to hold a peaceful candle-lit vigil outside the mansion of multii-millionaire Prime Minister, John Key.

They were protesting at New Zealand’s complicit support of President Obama’s drone strikes in Pakistan, Afghanistan,  and Yemen.

Drones are remote controlled robot planes that carry deadly missiles packed with high explosives. When they detonate, unlike a single bullet, they will  injure, maim, or kill  anyone and everyone within a  60 metre radius. Sixty metres – nearly the width of a rugby field.

Drone strikes have been used to kill alleged “terrorists”. They have also killed hundreds of innocent civilians.

In December 2009, a drone attack in Afghanistan killed forty people, including twentytwo children and  twelve women, in a village called al-Majala.

Four years later, in December 2013, ten people were killed instantly and another five died later from their missile-inflicted injuries. All of them were innocent people on their way to a wedding in Yemen.

There are  reports of other wedding parties also being bombed by US drone strikes.

But even those who have been deliberately targetted by the American Empire, as designated “terrorist” targets, have not been charged, tried, or convicted of any crime. Unlike a man on a battlefield shooting at you, these so-called “terrorists” have not been proven guilty of any wrong-doing.

Question: when did it become OK for Americans to condone State-sanctioned executions, without due process of the law? When did it become ok to designate human beings as “terrorist targets”, without evidence,  and kill them?

Once upon a time, no US president would have countenanced such acts – State-sanctioned executions – without mass protests on the streets of every major city in that country.

After the terrible event that was September 11, the collective psyche of the American people  changed significantly. It became more fearful, anxious, and  susceptible to stories of terror. That fear has silenced Americans’ usual sense of what is right and what is unacceptable.

Americans have been terrorised into submission – but not by Al Qaeda terrorists.

With their silence, they condone the extra-judicial killing of human beings in other countries, without any cloak of justice.

This, in my mind, is even more terrible than the destruction of the World Trade Centre towers. This, to me, signifies that the United States of America has lost it’s ‘moral compass’.

Meanwhile, a group of people in Auckland held a quiet, peaceful, vigil outside the Prime Minister’s residence. The vigil was a protest at New Zealand’s participation of the so-called “Five Eyes Network”, which has most likely (according to John Key) provided useful information to the American Empire in it’s War of Terror against the rest of the world.

– he was none too happy. Prime Minister John Key’s response was,

“I’ve always been a bit of the view myself that it’s not really cricket.

“Yesterday was family day, the afternoon when I got back was Max’s birthday, and just generally speaking it’s our home environment.”

John Key and his family are lucky people. Lucky not to be living in Afghanistan or Yemen. Lucky  that it was Max’s birthday.

It could just as easily have been another country and another event.

Washington Post: Everything you need to know about the drone debate, in one FAQ

The Nation: The US Has Bombed at Least Eight Wedding Parties Since 2001

NZ Herald:  PM unimpressed by protest outside his house