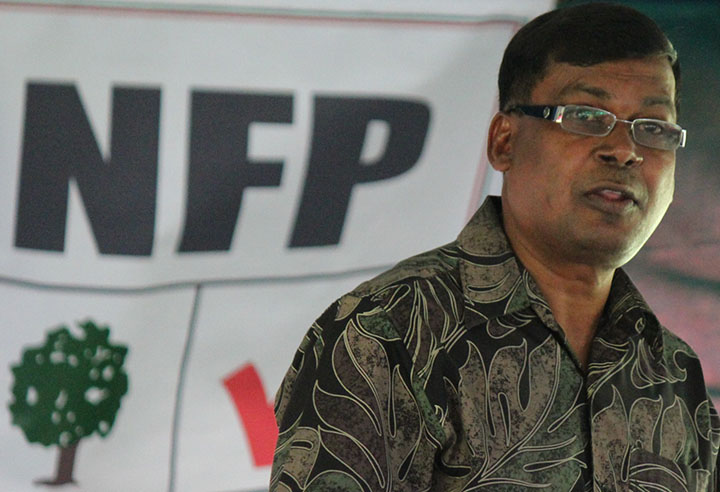 FIJI ‘new wave” political hopeful Biman Prasad, a University of the South Pacific academic and economist with some sound democratic credentials, had positive messages for the beleaguered media last weekend.

In a speech to a working group of the rejuvenated National Federation Party, he handed out a few bouquets to the Fiji scribes.

Professor Prasad was at pains to acknowledge the handicaps that journalists faced in Fiji under the Media Industry Development Decree (MIDA), saying that while this remained in force, the 2014 general election in September “cannot be free and fair – period”.

And unlike many other politicians, he actually knows what he is talking about with the country’s media. In 2008, he was co-editor of a Fijian Studies academic journal with the theme “Media and democracy” in Fiji. And this followed a rare Pacific media textbook textbook Media and Development: Issues and Challenges in the Pacific Islands. In both collaborations his partner was then USP head of journalism Shailendra Singh.

So his commitment to media freedom is sincere and well-argued. But after eight years under this military backed regime, it is hard to think back to the days when Fiji actually had a feisty, truly independent media, arguably the best in the region.

Still, recent signs indicate the media is growing restless under the “chilling” yoke that has kept them more or less in line – at least since the outright censorship era in 2009-2010.

“The media decree with its heavy fines and penalties make it impossible for the country’s journalists to cover issues openly and without fear. It makes it impossible for us to project our messages to our people,” says Prasad.

“To these journalists, let me say a big vinaka vakalevu. The stakes have rarely been higher and [the] weight on your shoulders so heavy.

“The nation owes you its profound gratitude as you take real risks to help project our messages to Fiji citizens.”

“We no longer live in the dark ages where governments habitually kept secret, public information such as salaries paid to our leaders, and allowances they are paid on foreign junkets,” he says.

Prasad’s great hope is that Fiji’s voters will rise up, shed their fearful responses and become active in the electoral campaign and ballot.

‘Stop the threats!’
“Our businessmen are afraid. They are all afraid of participating actively in the campaign.”

Professor Prasad has also called on the Bainimarama regime to “stop the threats, stop the victimisation, stop the intimidation of anyone – including media from participating and articulating their views” in the lead-up to the election.

But spare a thought for the courageous student journalists of the University of the South Pacific. In a recent edition of their award-winning newspaper Wansolwara, now 19 years old, the students addressed Fiji’s “media woes” and showed their industry colleagues how it is done when it comes to free speech.

In the editorial, Tevita Vuibau asked whether Fiji’s journalists could do more in spite of the decree with its draconian penalties:

“Fear, timidness and meekness – whether real or imagined – are assumed to be the rule by many media practitioners and observers in and out of Fiji, yet exceptions do exist. And with courage, skill and determination, the press can and will do more to become a true Fourth Estate.”