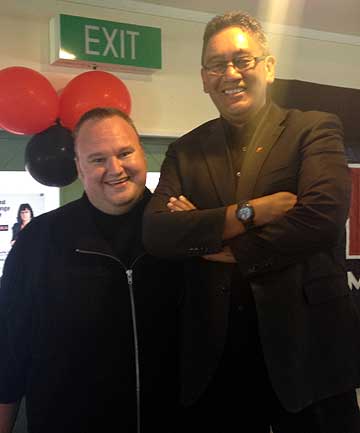 I’M VERY PLEASED with today’s announcement of an electoral arrangement between the Mana Movement and the Internet Party.

It’s an arrangement which will bring significant benefits to the Mana Movement and to the country.

The benefits to Mana are that the arrangement means we are more likely to increase our parliamentary representation without any compromise whatever on Mana policies or principles.

Because of confused reporting some people think this arrangement is a merger of Mana and the Internet Party. It isn’t. Instead it’s a strategic alliance (or strategic warfare as a friend puts it) where each party remains separate and independent but we co-operate together to form a group called Internet-Mana which will put forward a joint party list in the election campaign.

The Mana Movement remains independent with our own structure, our own leadership and our own policies.

Every Mana candidate will stand on the full set of Mana policies. We will argue them on the campaign trail and every Mana member elected will campaign inside and outside parliament for them.

Mana will continue to campaign for those stripped of dignity and self-respect by 30 years of vicious government policies which have made the rich a hell of a lot richer at the expense of the rest of us.

We will continue to fight alongside communities in places like Glen Innes, Maraenui and Pomare which have seen the scaly hands of John Key and the National government steal their homes and trash their communities on behalf of corporate greed.

In other words Mana is still Mana and the leader of the Internet-Mana is Mana leader Hone Harawira! (that’s four Manas in one sentence – you can’t have too much Mana!)

As I said in an earlier blog the main benefit for New Zealand is that it means every vote to get rid of the John Key government will be counted. If the Internet Party were to get say 4.5% of the party vote on its own for example then those votes, potentially up to 130,000 anti-National votes, would be wasted. Not so now.

There will be those who say Mana has only gone into this arrangement for the potential campaign money which the Internet Party can provide. However Mana’s priorities for 2014 have always been the Māori electorate seats and we already have the maximum funds we can spend on those campaigns. (In the three months leading up the election only $25,000 is able to be spent on an electorate campaign)

In that earlier blog I also wrote what I thought were the three big questions for Mana as we debated this arrangement with the Internet Party:

1. Would an alliance enhance or damage Mana as a kaupapa Maori movement?

2. Would an alliance enable us to gain greater parliamentary representation without compromising our policies or principles?

On the first question the answer is a definite YES. Hone Harawira is the leader of the new Internet-Mana arrangement – enough said for now.

On the second question I hope this blog gives a clear YES.

The answer to the third question is also a definite YES which will become clearer when the Internet Party announces its leader later this week.