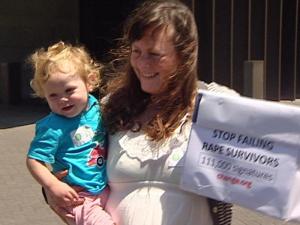 The poor communication and subsequent apology by police over the dreadful handling of the Roastbusters incident isn’t a one-off example of a communication breakdown and police ineptitude – this sort of thing happens frequently and of course undermines the confidence of the public – but the real reason the public confidence is low isn’t due to these gaffes alone. There are deeper issues that start with survivors feeling disincentivised about approaching police and culminate in sickeningly low conviction rates.

The recent injection of funds offered to survivor services was a sign the government is listening. After National spent the last few years stripping back rape crisis funding, returning it to people was an important and positive act toward restoration of faith. But overall that funding is still geared toward helping people survive rape rather than actual prevention.

One of the most crucial aspects to prevention includes addressing the key issues that originate at the reporting stage. The stats on this will blow your mind. Only 1 out of 99 attacks reported to police result in a conviction.This in itself is blatant evidence of a serious, endemic issue. There is major roadblock to justice going on and it needs to be addressed – that roadblock appears to be the justice system and police. How will public safety be assured if it’s almost impossible to gain a conviction? You see what is most worrying is this information applies to reported incidents alone. According to government estimates only 9% of sexual attacks are even reported; you heard that right, in this country roughly 0.09% of sex offenders are convicted. Is there any wonder sexual violence is so prevalent?

When only 1 out of 99 reported rapes result in a conviction the true lack of public confidence is justified. And proof that people have no confidence lies in the fact that less than 10% even bother to report sexual attacks.

Radical changes are clearly required and while there are absolutely cultural pressures that prevent rape reporting it seems safe to assume justifiable lack of faith in police and the justice system plays a big role. Correcting this situation would likely be a key action when it comes to rape prevention. I believe the police are people at the end of the day too, and because of this they would surely welcome any opportunity to turn this worrying situation around.

We need to get offenders into programs to stop them from offending. That needs to occur not only through self referral but also through conviction. It is noted that we have low rates of recidivism in New Zealand, so when offenders do actually make it into prison and prevention programs they are unlikely to reoffend and these programs perform well in terms of world standards. It’s time to ask politicians and police, “What are you doing to smooth the way to ensure offenders gain convictions?” “What are you doing to support self-referral by sex offenders in the community?” “What are you doing to ensure that substantially more than 0.09% of sexual attackers are referred to sexual violence prevention programs?”

This issue isn’t resolved. More questions are yet to be answered by the government and police themselves. Remember this is an issue concerning one in six men and one in three women – that means directly or indirectly it effects us all.