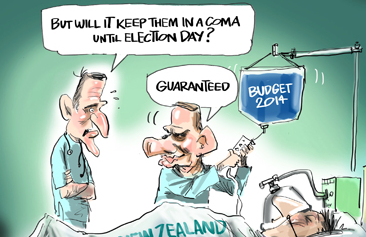 Right Wing blogger and National Party apparatchik, David Farrar, wrote in the Dominion Post on the day after the Budget,

“By contrast I expect debate on the New Zealand Budget to be over by Monday morning.”

Don’t you believe it, sunshine.

It was perhaps the last item – free healthcare for Under 13s – that took the media, public, and Opposition by surprise. As others have stated, it was a policy lifted straight from the policy pages of Labour, Greens, or Mana.

Which conveniently also happens to be election year.

As far as cynical self-interest goes, these Budget funding-measures are an obvious – if utterly crude – attempt at  currying public favour as Election Day bears down on this government.

Why was funding for sexual violence community groups not made available earlier, so that full staffing levels and services for survivors could be maintained? $10.4 million dollars out of a Government revenue of $64.1 billion is not massive by any standard. In fact, it is just a shade under one year’s worth of Ministerial travel, at $11 million.

Even the $2 million of taxpayer’s money paid  by National to a Golf Tournament over the last three years would have assisted these much-needed groups  keep their services intact and skilled counsellors employed,  until this month’s Budget.

Leaving critical funding till Election Year is tantamount to abusing the victims of sexual violence all over again.

The same could be said of funding free healthcare for Under 13s. If it is a good idea now – why was it not a good idea two years ago?

It’s not as if John Key did not acknowledge the growing under-class in this country only three years ago;

And a year later, this staggering headline appeared in the media – a story few of us would ever believe would happen here, in Gods Own;

Little wonder then, that Dr Nikki Turner, from the  Child Poverty Action Group, was less than impressed by National’s sudden transformation into a quasi-social democratic party with a newly-cloned heart, and a belated attempt to improve children’s health;

A child lobby group says free doctors’ visits and prescriptions will make little difference to reducing child poverty without also improving the incomes and the housing conditions of the very poor.

“Without adequate income, without adequate warmth and housing, we’re not going to (make) a lot of difference at this stage to our children’s health.”

Indeed. Without addressing the core causes of poverty-related diseases, National’s free health-care plan is simply a  multi-million dollar band-aid. The root causes of those diseases will still be present in many households up and down the country.

If Key and English thought that their band-aid solutions would be gratefully accepted by an uncritical, compliant media and public, they were mistaken.

An un-named author of an editorial in the Dominion Post on 16 May stated,

“This is a deliberately bland and even boring Budget. The Government has clearly decided that grey and safe is its best hope in election year. The only surprise was free doctors’ visits for under-13-year-olds. Middle New Zealand will welcome it, as it will many of the other, carefully telegraphed, handouts. More paid parental leave: who could object? A bit more help with childcare costs: why not?”

The same editorial went on,

“The other glaring black hole in the Budget is the housing crisis. More and more New Zealanders cannot afford a house, and the Government’s response is muted and inadequate. The Budget promises to remove tariffs on building supplies, a sensible step following revelations about the high price of such materials here compared with Australia. But the change will cut only a few thousand dollars from the price of a house.

Much bolder moves will be needed, including a capital gains tax. But National’s caution here is a drawback, not an advantage. Sometimes problems are serious and need action. National seems to believe it will be enough to cut red tape and remove some of the planning obstacles in the way of housing. It won’t.”

This is where John Key and Bill English have mis-calculated badly, and which no one (?) has picked up.

After all, if a problem with children’s health was not critical, why would a fiscally conservative government fund free doctor’s visits to the tune of $90 million? Indeed, as Trevor McGlinchey for the NZ Council of  Christian Social Services said, on 16 May,

“In providing $500 million of support for children and families over four years the Government has recognised many of our families are suffering.”

The key-word here is “recognised“.

In funding free healthcare, National has admitted to anyone who will take notice that a problem of some magnitude exists in this country. They can no longer hide behind platitudes.

As the above editorial went on to state,

“At present there is little rage about poverty, inequality and the housing crisis. These problems are raw and real but voters are patient and only a minority of voters now seem to actually hate National. It will probably take another term before a majority is truly fed up with Key and his band. In the meantime, this bland document may be a document for the times.”

A campaign manager with a posse of motivated, clued-up, and capable strategists, will be able to use this in the up-coming election campaign. Like a game of chess, in trying to show how “clever” they were in manipulating public perception, National have left their “social policy flank” exposed and vulnerable.

So much for Kiwiblogger Mr Farrar’s misplaced optimism that “I expect debate on the New Zealand Budget to be over by Monday morning”.

Quite the contrary, David.

By shining a bright, $90 million spotlight on this problem, they can no longer deny that it exists or is “improving”.

The cost of financing this country’s $59 billion debt is shown in this Dominion Post graphic;

The cost of financing our debt is shown to to $3.9 billion, per year.

Two years ago, the Green Party used Parliamentary Library information to estimate the cost of the 2009 and 2010 tax cuts;

“The Green Party has today revealed that the National Government has so far had to borrow an additional $2 billion dollars to fund their 2010 tax cut package for upper income earners.

New information prepared for the Green Party by the Parliamentary Library show that the estimated lost tax revenues from National’s 2010 tax cut package are between $1.6–$2.2 billion. The lost revenue calculation includes company and personal income tax revenues offset by increases in GST.”

The cost of those tax cuts is  roughly the equivalent of what we are now paying to service our overall debt.

So much for National’s “prudent fiscal managing” of the government’s books.

Someone at the Dominion Post seems to have a rather shocking memory. At the bottom of Page A4, in their 16 May edition, this item was published;

Promised tax-cuts in 2009 were not “axed”. As this IRD page explained;

Key even made this helpful suggestion to those who did not want their tax cuts to donate them to charity,

“I am just as sure there are many who are in a position to donate some of that extra income”.

Which would make it hard to donate non-existent tax cuts, as the author of the Dominion Post article claimed.

This graph from Treasury (with a minor enhancement by this blogger) shows our borrowings from 2003 to 2013, with subsequent estimations.

According to the graph, we can see how Labour paid down the country’s sovereign debt, leaving New  Zealand well-placed to weather the on-coming Global Financial Crisis and resulting recession. Something even Key and English have had to admit on occasion;

“The level of public debt in New Zealand was $8 billion when National came into office in 2008. It’s now $53 billion, and it’s forecast to rise to $72 billion in 2016. Without selling minority shares in five companies, it would rise to $78 billion. Our total investment liabilities, which cover both public and private liabilities, are $150 billion – one of the worst in the world because of the high levels of private debt in New Zealand.”

Letter to the Editor: playing politics with rape victims, National-style

Letter to the Editor: $3000 offer to the Unemployed is a joke – and not a very funny one!