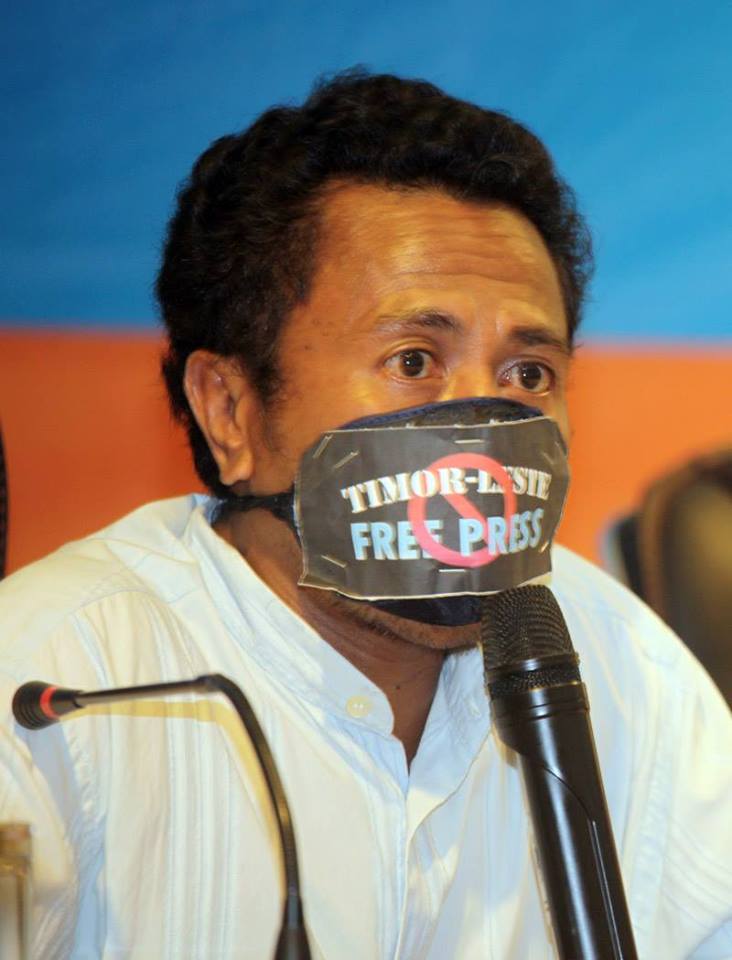 IT WAS a stunt that arguably, in any democratic country on any given day, would have led the media headlines and stopped anyone that cared about their rights to speak freely in their tracks.

But as the man who was this year included in Reporters Without Borders 100 “information heroes” list for his contribution to journalism world-wide, José Belo, sat quietly on the head table at yesterday’s Secretary of State-led media capacity workshop in Dili with a bandana fixed across his mouth, the noise was sadly minimal.

For almost an hour Belo sat, his mouth forced shut as a sign of the gag the veteran journalist believes will soon be forced on Timor-Leste’s fragile media under a new law.

As the nation’s first new media law now sits waiting presidential approval, Belo warned that, in its current form, its restrictions on who can and can’t operate as a journalist, government control of the regulating press council body and worrying stipulations on information access would signal the death of Timorese journalists’ spirit.

Sobering times, but is it too little too late to save freedom of expression and plurality of voices in a country that so many times has proudly paraded its own long fight for freedom?

Special permit
It also requires foreign journalists to get a special permit before being able to report from Timor-Leste and restricts foreign ownership of any form of media to 30 percent.

All media must provide the government with a list of journalists employed by the media company and publish their names in their outlets.

At a World Press Freedom Day seminar at the University of Timor-Leste on May 1, the head of the parliamentary committee, Carmelita Moniz, told journalism students and working reporters that any evidence of corruption by investigating reporters should be sent directly to authorities and not be published first in the media.

Belo has repeatedly claimed that the media control laws “go directly against the ‘spirit of the Constitution’” guaranteeing freedom of access to information.

He said he would not abide by these new laws and go to jail if necessary to oppose them.