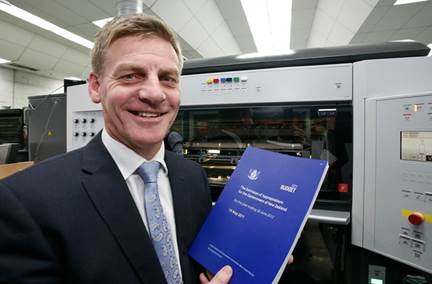 AS NEW ZEALAND CHOWS DOWN on Bill English’s “Cheese-on-Toast Budget” – relishing the sharp, melted-cheddar flavours of free doctors’ visits for the under-13s and an additional month of paid parental leave – Labour must be wondering just what they did to piss-off the political gods so badly. (As it happens, I can give them a hint or two on that score, but it’ll keep for another day.) Contrariwise, the near universal positivity pouring out of the “vox-pops” (those random interviews journalists conduct with people in the street) left little room for doubt that, when it comes to capturing the affections of the voting public, National and the political gods have still got a good thing going on.

And that’s the crazy thing about budgets, they’re all about the three or four hours immediately following their delivery. It is in this ridiculously short period of time that the character of the Government’s economic plan – for good or ill – will be decided.

There’s quite a troop of people who play a part in this. Obviously, the Finance Minister’s performance is important. A lack of confidence and clarity on the part of the document’s author is seldom considered helpful. Then there’s the Leader of the Opposition’s speech in reply. If it’s any good, the Budget will be passed on to the news media roasted, stuffed and with an apple in its mouth.

The media’s characterisation is, of course, crucial. If the Opposition’s on its game editors and journalists will already have been given the target or targets to attack. Economists and major league NGOs are then asked to pass judgement on the issues raised. Inevitably, one of these players will come up with the moniker by which the budget will forever after be known. (This year that honour went to the NZ Herald’s Business Editor, Liam Dann. He christened Bill English’s sixth “child” the “Cheese-on-Toast Budget”. Nothing fancy, but wholesome, tasty and always a firm family favourite.)

Sadly, David Cunliffe and his finance spokesperson, David Parker, failed to land a single solid blow on English’s creation. Cunliffe described it as the “Fudge-it Budget” (only to have the Prime Minister gleefully remind him that Rodney Hide had already given that name to Michael Cullen’s 2002 Budget). Parker’s response was typically wonkish: a perverse mixture of praise (for the $372 million “surplus”) and impenetrable – at least for the average punter – fiscal detail.

Not that we should be too hard on poor old Labour. What are they supposed to do when their enemies so shamelessly steal their policies? For the “true believers” at both ends of the political spectrum such behaviour is unconscionable. Whatever happened to principle!

But, like “Kiwi Keith” Holyoake before him, John Key is by no means averse to appropriating his opponent’s ideas – if that is what it takes to hold National’s vote together. That’s because Key remembers what the ideological hard-liners of his caucus (and Act) appear to have forgotten. That the purpose of the National Party is to bar the door to the House of Power and prevent the Labour Party from entering. Or, should Labour somehow manage to gain entry, to do whatever it takes to evict them. National’s first – and last – principle has always been: “Hold on to power at all costs, and don’t, under any circumstances, let Labour win!”

It’s what makes good National Party opposition leaders so ruthless and good National Party prime ministers so accommodating. It is also why it takes a special kind of Labour leader to summon the tremendous force required to make it through the door.

The House of Power cannot be entered without struggle. So, if there are still some in Labour’s caucus who secretly subscribe to the theory that all they have to do is wait until it is their “turn” to be in government, then they should abandon it immediately. They need to understand that, as far as National (and the interests it represents) is concerned it will never be Labour’s turn.

Think about it. It took the full weight of “Big Norm” Kirk and the unstoppable momentum of the 1960s social revolution to oust the National Party from office in 1972. And it was only Rob Muldoon’s refusal to be guided by his party’s “New Right” backers – plus the extraordinary subversion of the parliamentary Labour Party itself – that brought about the change of government in 1984. Labour takes power only in extraordinary circumstances, and it seldom makes those by itself.

A Labour leader more attuned to the animal spirits of the New Zealand electorate would have described English’s effort as the “Looking Through The Window Budget”.

He would have described National’s world in terms of a comfortable home with its lights blazing and the dining table loaded with good things to eat. The inhabitants can be seen through the window raising their glasses in a toast to their own good fortune. Things had been tough, but they have come through. They are back in the black!

Then he would have described the scene outside the house. The people standing there in the late Autumn darkness. The ones who haven’t made it through. The ones who are still doing it tough. Struggling to feed their families. Despairing of ever owning their own home. Overworked. Underpaid. Their unions under siege. Wanting a future. Angry that they’ve been denied one. Waiting, with growing impatience, for someone to break down the door to the House of Power – and lead them in.