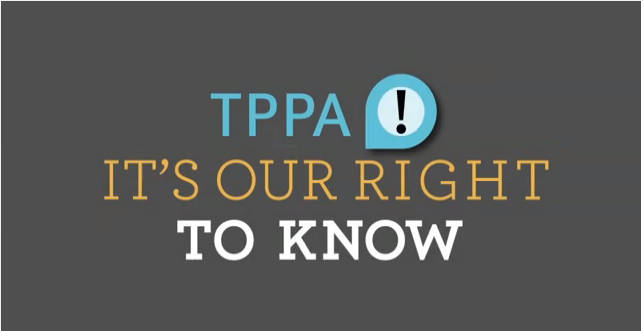 I am writing this in the midst of a strategy meeting of activists from over thirty countries to discuss how to build on the current momentum to put an end to the foreign investors’ ‘bill of rights’ in free trade and investment agreements, like the TPPA.

There are inspiring stories about successful resistance to investor rights to sue from South Africa, Bolivia, India, Europe and others. Equally, there are sobering stories of how corporate power is trying to use these shonky, biased tribunals to strangle the people’s revolutions in Latin America and the Arab spring.

In Aotearoa New Zealand investor-state dispute settlement (ISDS) has captured the imagination of Kiwis who care about smokefree policies (as in the select committee hearings at present), mining, health and safety, climate change, medicines, land ownership, privatisations, the Internet, and much more.

Outrage is growing. Last Monday more than 270 of our leading members of our health professional community sent an open letter to the Prime Minister voicing their concern that: ‘The TPPA threatens the future of health in NZ, by elevating “investor rights” of transnational corporations over the right of the New Zealand people to develop, adapt or improve domestic regulatory policies according to changing health needs.’

They funded an advertisement in the DomPost, followed by an op ed from Mark Smith and Anne Maclennan, a specialist surgeon and a specialist in palliative care. They wrote:

‘We have an ethical obligation to speak up when we see health and lives under threat. That’s why we joined hundreds of doctors and others signing an open letter to the prime minister about a trade deal. We’ve just changed the law on legal highs because of health risks. But the law change for cigarette plain packaging because of health risks stalled because of a trade deal. Big Tobacco is using existing trade agreements against Australia because our neighbours have introduced plain packaging.’

OraTaiao: The New Zealand Climate and Health Council earned that ISDS ‘allows overseas companies, including fossil fuel companies, to sue our Government if any local law changes might substantially affect their value or profits.’

They highlight two investment disputes that Germany currently faces, being brought by Swedish firm Vattenfall, which helps to explain growing resistance in Germany to ISDS.

The media has given almost no coverage to these statements – hence the focus in this blog.

We need to make much more noise about ISDS so the media sees it as a headline issue.

New Zealand has limited exposure to these risks at present because we have signed a limited number of investment treaties and investment chapters in free trade agreements. The FTA with China carries the greatest risks.

The TPPA would magnify them and expose future governments to threats and actual litigation in these discredited arbitral tribunals.

The negotiators are meeting again this week in Vietnam where they aim to knock off remaining issues in the investment chapter, among others. Ministers will then meet on 18-20 May in Singapore.

The time to take a stand in opposing ISDS is almost passed.  Let’s remember why this matters …

Many of Labour’s proposed policies could run into problems. So would Greens, Mana, New Zealand First. Maybe even the Nats!

We need a loud chorus of opposition to ISDS in the TPPA now in every forum you can find. Then we need to work out how we make sure that there are no more investment agreements and we start to work out how to wind the existing ones back. Hopefully I will come back from this meeting with lots more ideas.