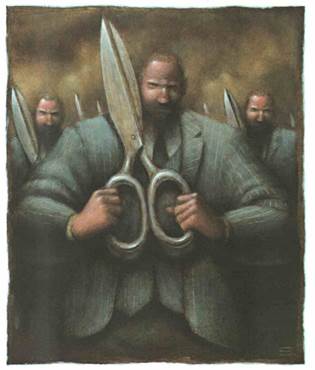 THE WORLD OWES a debt of gratitude to Florida bartender, Scott Prouty, the man who videoed Mitt Romney’s infamous 47 percent speech. It was during this speech that the Republican Party’s nominee for President of the United States told his $50,000 per person fundraiser that 47 percent of Americans were dependent on government, saw themselves as victims and believed government had a responsibility to care for them. More than any other single factor, it was Prouty’s recording that derailed Romney’s campaign for the Presidency.

The potency of the tape lay in the insight it provided into the minds of the very wealthy men and women to whom Romney was addressing his remarks. Some commentators construed its message as demonstrating how out of touch Romney and his Republican donors were with the realities of American life – especially in the aftermath of the Global Financial Crisis (GFC). Inasmuch as it grossly overstated the level of dependency and fundamentally mischaracterised the expectations of ordinary Americans Romney’s speech did testify to his political ignorance. What it also demonstrated, however, and more importantly, was the open contempt in which America’s ruling class held nearly half of the American people.

Because, of course, that “47 percent” wasn’t a statistic – it was code. What Romney was signalling to his audience was that once you deducted the Blacks, the Hispanics and the Poor White Trash from the raw total of American citizens, 53 percent was all you had left. His comments were thus intended both as a reminder and a warning to his wealthy donors about just how tenuous their position was. If something wasn’t done – and soon – to stem this rising tide of outstretched hands, Romney was saying, then “Real America” – the 53 percent – would find themselves out-voted by the other America.

This equation of White, Anglo-Saxon Protestant and economically comfortable America with “Real America” is deeply embedded in the political psyche of the Republican Right. Interestingly, one of the most cogent statements of WASP prejudice comes in in Eric Roth’s screenplay for The Good Shepherd – a movie about the foundation and early years of the Central Intelligence Agency. Halfway through the film Roth brings together the hero, Edward Wilson (Matt Damon) a senior CIA officer, with Joseph Palmi (Joe Pesci) a Mafioso chieftain.

Joseph Palmi: Let me ask you something … we Italians, we got our families, and we got the Church; the Irish, they have the homeland, Jews their tradition; even the Niggers, they got their music. What about you people, Mr. Wilson, what do you have?

Edward Wilson: The United States of America. The rest of you are just visiting.

This attitude remained deeply imbedded in the CIA. When the right-wing Republican, Ronald Reagan, became President in 1981, his appointee as CIA Director, William Casey, launched an unofficial purge of the Agency’s hyphenated Americans – especially those whose immigrant parents and grandparents hailed from suspect homelands in Eastern and Southern Europe.

AUSTRALIA AND NEW ZEALAND are not, of course, the United States, but, like it or not, they (along with Anglophone Canada) remain strong outposts of the great Anglo-Saxon diaspora of the eighteenth and nineteenth centuries. Their ruling-classes, like the ruling-class of the United States, are also White, Anglo-Saxon (to which we can now append Celtic) and Christian (Protestants and Catholics having long ago joined forces against the rising tide of “Secular Humanism”) and in relation to their respective states both evince a deep proprietary awareness. They see it as their bounden duty to ensure that Australia and New Zealand continue to be governed by “the right people”.

In both countries there is a growing fear that the demographic structures of their populations are turning against them: that, as in the United States, the electoral equation can only be made to work in their favour by ensuring that an increasingly large proportion of the electorate is dissuaded, for whatever reason, from casting a vote.

The Australian ruling-class finds itself at a decided disadvantage on this score. The Commonwealth’s compulsory voting legislation means that the participation rate in Australian elections remains exceptionally high. It also means that when the Liberal Party find itself in power, with its most aggressive ideologues calling the shots, its ability to implement the sort of far-Right programme demanded by the Liberal Party’s billionaire backers tends to run into a series of demographic and democratic road-blocks.

Joe Hockey’s – the Liberal Party Treasurer’s – Budget is being trumpeted as a no-holds barred assault on the social-democratic reforms of the last 40 years. We shall see. The polls are already registering a gathering public rejection of the Liberal’s hard-line approach. If Hockey’s Budget is as bad as people fear, the Government of Tony Abbot may not see out the year. The precedent set by the Liberal-dominated Senate’s constitutionally objectionable refusal to pass the Budget of Gough Whitlam’s re-elected Labour Government in 1975 may well come back to haunt them.

The National Party-led government of John Key and Bill English in New Zealand has much more room to manoeuvre. Their ideological latitude is, paradoxically, attributable to the constitutional ramifications of National’s own attempt to do what Hockey hopes to do – unwind the welfare state and “put an end to the age of entitlement”. Ruth Richardson’s 1991 “Mother Of All Budgets” (clearly an inspiration for Hockey) so deranged the New Zealand political order that, in 1993, the voters threw out the First-Past-The-Post electoral system and replaced it with a form of proportional representation.

The conditions of so-called “elected dictatorship”, which had made the whole neoliberal revolution in New Zealand possible, were reconfigured in such radical fashion that the pursuit of a hard-line, ideologically-driven programme became electorally unfeasible.

For the foreseeable future New Zealand seemed destined to be ruled by necessarily moderate coalition governments. The former Reserve Bank Governor, Don Brash’s, determination to test this proposition in the election of 2005 brought his radically right-wing National Party closer to victory than many pundits believed possible – but not far enough.

One of the (many) mispronouncements and campaigning gaffes that cause Brash to lose the election was a statement he made just 72 hours before the polling booths opened in which he conflated “mainstream New Zealanders” with National Party supporters. The similarities between Brash’s remark and Romney’s are remarkable. The willingness of both men to cast half of their respective nation’s citizens as “The Other” – persons somehow unworthy of either recognition or representation – exposes the enduring weakness of the Far-Right. Its apparent incapacity to practice the politics of inclusion.

The contrast between and ultimate fate of Joe Hockey’s and Bill English’s Budgets will be interesting to observe. The former’s, I suspect, will prove the downfall of Tony Abbott’s government. The latter’s, by being framed to include as many of the voting public as English deems ideologically defensible, will, at the very least, give John Key’s government a fighting chance.