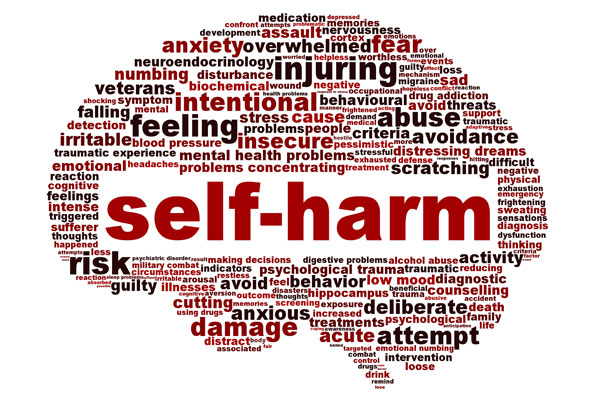 3 years ago, during the 2011 election campaign, I wrote a blog about self harm, and our mental health system’s struggle to deal with the issue effectively with empathy, understanding and respect. I was pretty mad, you can tell – and for good reason. I was very much over seeing struggling people cast aside by the system and labelled uncurable and an inconvenient troublesome patient they wished would disappear. And my compassion and empathy towards this topic hasn’t faded, in fact it has grown.

Fairfax published this excellent piece on self harm on Saturday, which triggered this blog, as it was fantastic to see some good research from NZ on the topic.

Self harm is an umbrella term for physically-destructive behaviours born out of inner trauma and turmoil. The highest incidence is in teenage girls, however males and adults also self harm. Many self-harmers are survivors of abuse and violence – and I don’t just mean overt – I also mean more covert abuse such as emotional abuse, toxic family dynamics and bullying. It is their way of physically expressing and easing emotional pain too frightening and/or overwhelming to express with words.

A disclaimer: I haven’t struggled with self harm, but I have had a lifelong battle with PTSD and depression. And as a friend, activist & support person I have a high level of interaction with survivors of abuse and violence – many of whom struggle with self harm. So I admit that my view on the situation is painted by lots of anecdotal evidence. However I also closely follow mental health & psychology developments in NZ and worldwide, and progress on effectively treating self harm is ramping up overseas, but is still very slow here.

Every person struggling with self harm I have met in NZ has had issues being taken seriously by mental health services, and accessing treatment that works. For them, going to hospital for self harm issues guaranteed crisis treatment, then a hasty ‘diagnosis’ of borderline personality disorder (BPD), followed by being denied ongoing help – because personality disorders aren’t the same as a ‘real’ mental illness (the common view expressed is: Personality disorder = your fault, Mental illness = chemical imbalance + fixable). There was no organised treatment plan, no holistic approach, and no resources available to help (read: you’re incurable, you’re not mentally ill, you’re just screwed up, we’re done with your drama, go away).

I’m not sorry to say that is not good enough.

Which is why studies like Hermansson-Webb’s are so vital. 12.5% of teenage girls in NZ. That’s a big number. The vast majority of these girls will move on from this period and have normal, successful lives – and more will thrive with the right treatment. The prevalence of BPD in the community is still up for debate, but studies reflect a range of 1-6%. So clearly, the majority of self-harmers do not have BPD. It’s a time in their life where things are messy, this works for others, I’m going to try it – and with support, move on with better coping mechanisms. It often isn’t – and never needs to be – a forever sentence. There are now also effective treatments for BPD, so that chestnut being thrown at patients and their families isn’t valid either anymore.

It takes a lot of guts, parental & friend panic, and often life threatening events for someone who self harms to seek help. Which is why I struggle with psychiatry’s frustration in treating patients who self harm. It is difficult. It is frustrating. There definitely are 2 steps forward and 3 back and so forth on the journey. But that is no excuse to not provide effective treatment and support. Because not doing so often doesn’t end well. Research indicates that between 55% and 85% of those who self-injure will attempt suicide at least once. And real or perceived rejection by mental health professionals while seeking help is often a trigger for suicide attempts.

There is hope if you or someone you love is experiencing issues with self harm or suicidal ideation (A nagging desire to commit suicide, seeing suicide as the only way out). You should not be condemned to a life of self destructive behaviour and an incurable personality ‘defect’. A form of cognitive therapy called dialectic behavioural therapy (DBT) is showing fantastic results worldwide in treating people with self harm issues. It’s been around for a while now, but it isn’t available in all areas of NZ, with the most resources located in the Auckland region. However Googling dialectic behavioural therapy with Invercargill pulls up nothing helpful. What NZ needs is trained and competent DBT (and other proven, effective therapies for self harm) practitioners available in all of our communities, so no matter where you are, you can access the right help – both from mental health services and accredited counselling/psychotherapy practitioners.

The Green Party’s long-standing youth policy promises that we will make young people’s mental health services an urgent priority. That includes specialist services for youth struggling with self harm issues, which this study shows is rampant among our vulnerable teenagers.

With such a huge risk for suicide, providing the right help to people struggling with self harm should make a valuable contribution to not only improving people’s lives, but to stop people from ending their lives too.