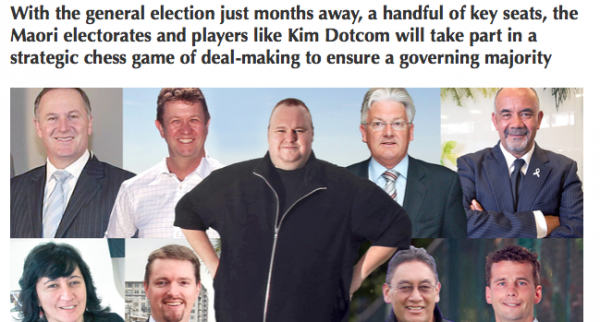 Firstly, thank God Mike Williams has written this column  explaining how MMP and a handful of electorate seats will be all the difference between forming a Government and not forming one. To date, large chunks of NZ (and the political punditry) keep insinuating, via flawed landline opinion polls, that almost half the country love John Key and the expectation is he will sleep walk to a landslide victory.

The reality as TDB has been pointing out for some time is that a landslide for National is unlikely to occur because Labour will use MMP tactics to win.

Mike’s overall point that this election will be FAR closer than the corporate media are pretending it will be is sound, however some of his intel on electorate strategy seems slightly out of the loop. I’m told Mike was telling Vernon Small on the day the Matt McCarten rumour for Chief-of-Staff was broken that he was wrong an hour before Mike had to appear on RNZ Nine to Noon where he suddenly U-turned after being filled in that yes, Matt was really going to be the Chief-of-Staff, so Mike’s view on things isn’t from inside the war room.

Let’s run through it.

Epsom:
Mike thinks Epsom is safe ACT. I disagree. This election there will be a strong social media push for Labour, Green and MANA voters in Epsom to hold their nose and vote for the National Party candidate. There were 6000 wasted votes last election for Labour, Green and MANA candidates that could never win while a high profile name like Banks only won by 2000 votes. David Seymour is as free flowing as C3-PO with arthritis…

…expect to see Labour, Green and MANA Epsom candidates to pull some surprises in the campaign to see ACT eliminated.

Ohariu
I think Mike is being hopeful here. Labour’s strength in Ohariu was driven by Charles Chauvel’s personal popularity, minus him the National Party vote is still large enough to leak to Dunne. As much as I would like to see Dunne go, I don’t think he will.

Conservative Party seat
I think Mike is closer to the mark here. National know a Conservative Party-National Party coalition scares the bejesus out of National’s socially liberal urban vote. Any plan to throw Colin an electorate lifeline with a hot milo in Pakuranga will be made desperately two weeks out from the election.

The Maori electorates
Cunliffe’s brilliant selection of Matt McCarten as Chief-of-Staff was partly driven by Matt’s knowledge of using MMP tactically. The amount of white media in NZ who have written off Hone winning his seat is too numerous to list, and suggestions he will lose seem based on pundit dislike of Hararwira than genuine insight. Kelvin Davis will gain very high place on the Party list so Te Tai Tokerau voters will know voting Hone will gain them Davis anyway. Two representatives for the price of one.

In terms of Waiariki, Mike is well off. Annette slashed Flavell’s majority from 7000 to under 2000 in just 6 weeks of electioneering, she has devoted the last 3 years to building one of the largest electorate networks in any of the Maori electorates. Seeing as the Maori Party will lose their other two electorates in this election, if Flavell holds on to Waiariki with a 2% Party vote the Maori Party could bring in 3 MPs. That’s 3 MPs for National. Waiariki is crucial for the Left to win and MANA is best placed to do that.

Dotcom’s Internet Party and Mana
Mike gives my passion project 2% support, I say 3%+. The strongest argument for a possible alliance between MANA and the Internet Party is that their combined weight of numbers could be the difference between a Labour-Green Government or a Labour-Green-NZ First Government. If progressives want real change, a Labour-Green Government with a supply and confidence agreement majority via the MANA-Internet Party would do that. My thinking is that even if Labour and the Greens were to secure such a majority, the smart money would still be on including Winston into the mix (if he gets over 5%) and cement him in with a legacy policy.

I think progressive voters who want this Government out are going to be very tactical about their voting this election and I think social media will play a critical role in being the vehicle for those strategies to be communicated.

John Key may certainly win the most seats on the night, but he will have no mates to form a majority. A Labour-Green-MANA-Internet Party could well be the next Government in an arrangement with NZ First while the Maori Party and ACT could well disappear from the political landscape altogether.

No one in the mainstream media punditry seem to be barely aware of this possible outcome.