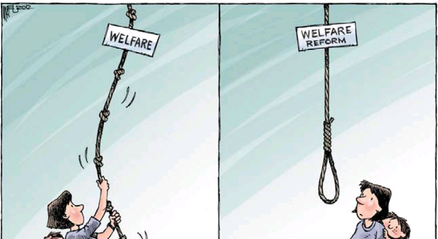 One of the most enduring, irrational, and hateful myths constantly spat our by various right-wingers is that solo-mothers (but never solo-dads) are “breeding for business“. It is a cliche that rolls of the tongue easily; requires no evidence; and ignores simple realities of life such as women who escape violent relationships or are deserted by their partners for the blonde office-colleague.

Whether it is John Key referring to women as “breeding for business“, or anonymous redneck bigots parroting their cliches via on-line fora – solo-mums (but never solo-fathers) make for  easy targets. As one ignorant, right-wing bigot said on his blog,

“It seems like a good start but incentives really need to be focused on making it harder for Mums to pop out kids on the DPB and easier if one chooses to be honest with others and themselves and work for a living to support themselves and their family.”

Prejudice requires no justification. It just  panders to negative emotion rather than critical thought.

After all, when is the last time solo-fathers were targeted by right wing bloggers; beneficiariary bashers; or this government. Answer – practically never. If ever.

Equally pernicious is the right wing blogger, commentator, or self-proclaimed “expert”, who mis-uses statistics to prove their point, but which, upon closer analysis, debunks their case entirely.

The rationale for prejudice is fairly simple.

It absolves right-wing governments from adopting constructive, but costly policies such as the Training Incentive Allowance, which allow solo-parents (mums and dads) to gain an education and re-enter the workforce when family committments allow. This is how the current Welfare Minister, Paula Bennett, obtained her university degree – the Training Incentive Allowance.

In July 2009, Bennett scrapped the allowance altogether. And when two solo-mothers criticised Bennett’s actions, the Social Welfare Minister reacted with the full power of the State at her finger-tips, and released their personal details to the media. It was a frightening, sickening, display of abuse of State power unseen since Rob Muldoon’s reign of fear.

Three years later, despite the Director of the Office of Human Rights Proceedings, Robert Hesketh, upholding a complaint again Bennett, the Minister was unrepentant and said she would do the same thing again after “taking advice”.

Two years ago, as the  economy stagnated and unemployment soared to 7.3%,  National ramped up it’s brutal and destructive campaign against those on welfare. Key and his cronies needed a scapegoat to deflect public attention from daily bad headlines, and welfare beneficiaries were targetted.

Bennett launched a public campaign advocating that solo-mothers and their daughters should be “encouraged” to take contraception.  National and ACT both supported this draconian, Daddy State policy.

For two erstwhile liberal parties committed to getting government out of peoples’ lives, they were very, very keen to get into the bedrooms of women.

But not middle-class women who were either  independent via employment or a part of their (male) partner’s hegemony. This was directed at women who were single, poor, abandoned, and reliant on State support. In other words, vulnerable women.

And as we all know, bullies, rapists, misogynists, etc, prefer their intended targets to be as vulnerable as possible.

That allows their bodies to be owned and controlled.

So National and it’s  lap-dogs, in the form of  serial-liar, John Banks, and “Mr Sensible”, Peter Dunne,  supported moves to control women’s bodies.

All of which was carried out with the sub-text that solo-mothers (but never solo-fathers, remember) were reckless breeders.  “Breeding for business” as John Key put it.

As unemployment skyrocketed to 7.3%, and awkward questions were being asked of National’s economic plans for growth, Bennett was lighting the torches for the mob to ferret out; hunt down; and deal to, women who were “breeding for business“.

Of course Bennett denied  that  women would be coerced to take contraception;

“It’s not compulsory, it’s just something to add to them trying to plan their family so they’ve got choices. It’s completely reasonable.”

Of course it was not compulsory. It was not meant to be. That was never the point of National’s on-going demonisation of beneficiaries – especially solo-mums (but never…) as a multitude of anti-welfare headlines hit the media in 2012, courtesy of National.

It was all part of National’s covert strategy to divert public, media, and political attention from economic problems confronting this country. National’s hands-off ideology was not working, and a very dramatic distraction was needed. A distraction that jerked all the right  visceral responses. A distraction that National’s rightwing sycophants, cronies, and malcontents could pick up and promote.

A distraction that was too much for the powerless to fight back.

The National Government would sort out these wanton women of loose morals.

Cue; two years later, this recent editorial in the Dominion Post.  As far as editorials in a conservative newspaper went, it was quite extraordinary, as it exposed and laid bare National’s  manipulative, self-serving policy of vilification against those on welfare. I repost the entire editorial, rather than just the headline and first couple of paragraphs, as I usually do;

The Dominion Post – not normally renowned as the champion of the underdog when it comes to social welfare issues. So for the un-named writer to denounce National with such vehemence speaks volumes that the media was no longer buying into the “bene-bashing” narrative.

What is more, ACT’s latest leader, Philosopher/Libertarian, Jamie Whyte – in response to a point made by Green Party co-leader, Russell Norman – let slip on TV3’s The Nation on 10 May;

“Do you really think people only  have children because you flick them a few bucks?”

So people do not have children just “because you flick them a few bucks”?

Money is not a motivator?

Of course not. “Breeding for business” is a fiction.

But for certain right-wing politicians, it suits their agendas to demonise the poor; the powerless; and the marginalised.

Fortunately, though,  every so often the truth will out.

Thank you, Mr Whyte, for going on the record.

Political Animal: National’s Welfare “Reform” : Is that it?

NZ Herald: No apology from Bennett over leaked income data

Of witch hunts and solo mums