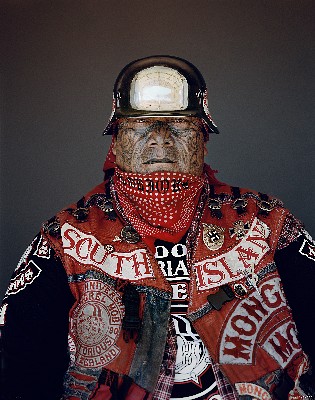 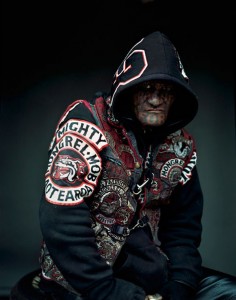 There has been a lot of hype and controversy over the commercial photographer Jono Rotman’s latest body of work which opened last week at Auckland’s Gow Langsford Gallery. Rotman spent 7 years photographing and unpacking narratives of Mongrel Mob members. The results are eight, white framed, life-sized photographic portraits in which predominantly Māori men have been photographed wearing their gang patches, SS helmets and other Nazi paraphernalia and leathers.

It is hard to escape or avoid the reading of Jono Rotman’s work as effectively glamorizing and romanticising gang culture. As Ruth Money from Sensible Sentencing Trust said “I think it is glorifying gang culture and completely offensive to their victims, and the members of the public and society who live a socially acceptable and tolerated life.” Rotman certainly has presented a sanitised portrayal of gang members.

There has been a lot of praise for Rotman’s work, for example; he won the prestigious Marti Friedlander Photographic Award for his photographs of Mongrel Mob members. However, like many other artists making art about other sub-cultures or cultures, Rotman’s work clings to a central narrative of a ‘fringe group’ while documenting the ‘other’ and focuses on male leadership. For all the hype over this work there is nothing particularly interesting about what he has done. As Dr Paul Moon, who lecturers in History at Auckand’s AUT, said when I interviewed him ‘His emphasis on the lurid “other” no doubt has an appeal for some viewers, but at the same time, the echoes with 19th century propaganda art which aimed at denigrating Maori are deafeningly loud.’

Rotman’s series creates an artistic platform which apparently attempts to remind us of the history and humanity of people who are often perceived as inhuman. These gang members come from a sub-culture which is widely known to use the dealing of drugs, violence, intimidation and gang rape for gang initiation, control and power. Anyone who commits crimes like this are arguably monsters.  In light of the atrocities perpetuated by gangs and gang culture, Rotman’s attempts at portraying a human side to these men can be read instead as romanticising this gang culture.  As Rotman states,

“In a wider historical scope this work explores the idea that a predominantly Maori fraternity can be considered a logical and brutal result of the colonial process. Both as tribal orphans and as vessels of post-colonial trauma. Now many generations deep, the Mongrel Mob is an established identity with a complex and arcane lore, and a legacy that extends from the abhorrent to the redemptive.”

Rotman speaks of “the redemptive” but offers no proof of the redemptive in his work. Each man depicted in his photographs still wears their gang patches; they have not left gang life and there is nothing that tells the viewer these men are reformed. I understand Rotman wants to challenge stereotypes of gang members by showing us a “more human side” but at the very same time he perpetuates the colonial stereotype of “the violent savage”, seriously undermining and contradicting the works stated aim. If Rotman was feeling some residual guilt about living in Aotearoa rent free or wanted to address the sins of colonisation, the last thing he should be doing as Dr Moon suggested, is resurrecting iconography applied in the early 19th century and replicating it.  Dr Moon had this to say when I spoke to him,

“Rotman is undoubtedly an accomplished photographer. His potent mix of lighting, composition and perspective produce a striking visual narrative that is hard to dislodge from the memory. But in some of his portraits, he has nudged the representation of Maori backwards – reverting from the passivity of the painter Goldie [Charles Frederick Goldie] to the earlier implication of Māori as a violent race.”

What is both interesting and disturbing about Jono Rotman’s photographic series is each picture, depending on the series purchased, is selling for between $18,000k and $30,000k. The Photographs of predominantly Māori men which are being sold as high art have been taken by a white privileged man and are most likely going to be bought by white Europeans. After all, the high art market can only be afforded by the privileged and rich. As Peter Sykes, head of the Mangere East Family Service Centre, said “The fact is, lots of families from South Auckland won’t be going to see an exhibition in central Auckland.”

When I talked to the Gow Langsford Marketing director I asked if the artworks had been purchased by predominantly white Europeans to which she declined to answer, saying “I do not think I can tell you that information.”

As the people who purchased these photographs, go about their daily domestic business they can gaze upon—from a safe distance—the ‘violent black person’ and think about how well spent their money has been. Isn’t this perverse cultural voyeurism? Do the buyers of these photographs get some titillation from viewing an artwork that captures predominately tattooed Māori mobsters, which perpetuates damaging stereotypes that are inherit from our colonial period? I guess those rich folks buying these photographs can have a sense of absolution knowing most of their money has gone to a children’s charity though? As Dr. Moon said,

“it [Rotman’s work] reinforces those stereotypes of the ‘other’ in some senses it revives the idea of the barbaric savage, which was really the subject of mid 19 century art… and this in a sense revives that approach and it reinforces that lingering feeling that some people have about Maori; that inheritance we have from our colonial period when somehow they [Maori] were barbaric, needing to be civilised and this cuts across this; the image of gang members which becomes a reversion to this stereotype. It accentuates those very negative colonial stereotypes.”

I am not saying white people should not make work about other cultures that happen to be brown, what I am saying is there needs to be some moral accountability if you do.

Apart from perpetuating damaging stereotypes of indigenous people, Rotman has also effectively immortalised an accused killer; Rotman choose to leave in a photograph of Shane Harrison who is on trial for the murder of Sio Matalasi. The decision to exhibit this image seriously undermines the work itself which attempts to humanise the publically perceived inhuman. Not only this but as Rotman’s show opened last week an ex Mongrel Mob prospect  Mauha Fawcett was found guilty of partaking in a brutal and sustained gang rape of Mellory Manning in December of 2008. Her body was found the next day partially clothed, covered in bruises and mutilated. Fawcett murdered her to gain a gang patch. Clearly, art is not made in a vacuum – even if Rotman seems think it is.

When I attended art school one of my photography tutors once asked me, “if someone takes away the rights and freedom of speech of another person, do they deserve to keep theirs?” my tutor’s words ring true in relation to Rotman’s photographic series. He has used photography as a method of telling/discovering these men’s stories, men who are part of a sub-culture which silences other human beings through violence, intimidation, rape and sometimes murder. I know women, one of which is related to me, who have been gang raped and their stories have never been told; their rapists never bought to justice. As Rotman said,

“Because I keep returning, I think they [Mongrel Mob Members] recognise that I’m not in it for a quick media bite. This is a serious body of work and it is part of their story.”

When I tried to get hold of Jono Rotman through the Gow Langsford Gallery to interview him I was told “Jono prefers to let the work speak for itself,” this is an illuminating statement that perhaps also “speaks for itself”. If you are going to use art as a form of serious social commentary then you need to be prepared to answer for your work. Rotman may not consider himself a political artist but he has created and is publically exhibiting a highly political body of work with heavy social and cultural loading. You can wield art as a weapon for change, or you can blow your own foot off with it. There seems to be a major lack of moral and ethically responsibility and consideration from the artist over his own work.

As a well-known New Zealand photographer who has asked to stay anonymous said to me “bold images but they are almost void of any context.”