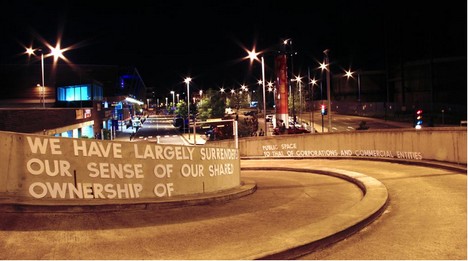 The Auckland Council is in talks to privatise a section of Queen Elizabeth Square as part of a $300 million redevelopment by Precinct Properties of the Downtown Shopping Centre, say sources.

They say the council is looking at a deal with Precinct Properties for public space outside the Downtown Shopping Centre where a stand of kauri and a basalt fire rock occupy a shaded and windswept part of the square.

A three-storey podium could be built over the area in exchange for a public laneway being included in the development. The deal could include a financial payment from Precinct to the cash-strapped council.

The possible sale of public space at QEII Square follows news yesterday that the council is considering two large commercial buildings on Queens Wharf in exchange for upgrading the downtown ferry terminal.

We already have public access because the space is open to the bloody public, flogging it off to a corporation is an obscenity. For those old enough, remember how QE2 Square was much larger? Remember how the bloody Council reduced that to half its size for the Britomart complex and now they want to sell the lot off do they?

There are a host of places in Auckland that removed public space for corporations in exchange for ‘public access’. It is access that is never publicised and is quickly forgotten. Sky City gained all the space above Federal street, these clowns want to chew up QE2 Square and we are at risk of losing access to one of our wharfs.

Privatising public spaces for corporations in exchange for ‘access’ is disingenuous bullshit and Aucklanders shouldn’t tolerate it for a second.