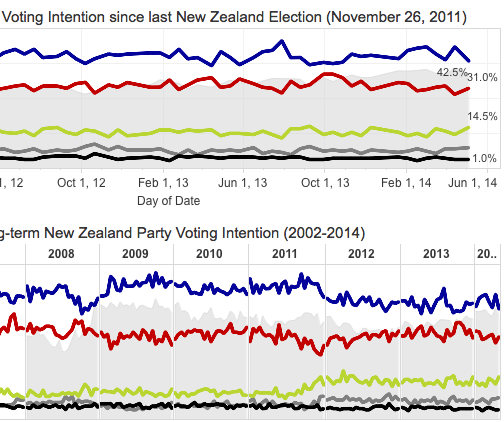 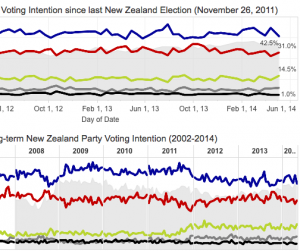 The Latest Roy Morgan Poll is out indicating National’s support collapsing by 6 points and the Labour-Green bloc up by 5.5 points.

The Roy Morgan poll can be viewed on my LiveNews.co.nz site.

If a National Election were held now the latest New Zealand Roy Morgan Poll shows that the potential Labour/Greens alliance would be elected.

This poll suggests National’s brand and credibility has been damaged by the Judith Collins’ Oravida conflict of interest scandal, and, perceptions that National is a government preoccupied with cronyism and sleaze.

National’s month from hell has clearly been made worse by the Maurice Williamson resignation after he was exposed for having contacted Police requesting a review of an investigation into an alleged act of domestic violence – the accused being a wealthy National Party donor and acquaintance of Williamson’s.

Revelations that National has been running a Cabinet Club (revealed yesterday by the Greens) will likely accentuate National’s demise, leading swing voters to reassess their party loyalties.

The Cabinet Club is ‘an exclusive club run by the National Party, where members pay a large annual subscription to attend meetings that give them guaranteed access to government Ministers.’

Can the National Party brand be repaired? Its support looks likely to fall more before it plateaus, especially considering the Roy Morgan poll was taken between April 21 – May 4 – so it only slightly picked up the reaction of Judith Collins’ victimisation of respected press gallery journalist, Katie Bradford.

In one month, since the Roy Morgan April 17 poll, National has seen its lion’s share of support collapse from what was then said to be National’s (then on 48.5%) biggest lead over Labour/ Greens (then on 40%) since July 2013.

Labour and the Greens have since sustained a turn around of fortunes after being seen as a credible government in waiting bloc.

Labour’s monetary policy has certainly attracted respect among economists, the business fraternity and the centre-left largely for the reasons highlighted in Chris Trotter’s piece titled: The Talented Mr Parker.

Labour needed a circuit-breaker after the damaging press it received in the wake of Shane Jones’ resignation. It certainly got this on the economics front, and also gained acknowledgement for the principled stance asserted by Grant Robertson over the Oravida scandal – and for his detailed and skilful handling of the affair.

If the opposition bloc can maintain this style of credibility it may influence a remaining 6% of uncommitted potential voters to consider a change in government.

It shouldn’t be too hard considering the level of government debt National has racked up since coming into office – up 442% from $10.2b in 2008 to $54b in 2014, with mortgage interest rates on the climb, and the current account deficit set to blow out once again.

Labour has led the charge on this with respect to the economy, regional development, and core social provision areas. The Greens are sticking to their knitting pointing to a progressive environmentally sustainable option. Mana is solidifying its representation and leadership of New Zealand’s low income earners and politically estranged classes, and the Union movement is assuring us it has a plan to roll out a record number of voters come September 20th.

But what the country needs now is the next roll out of solution-based policies.

Labour in particular, on 31.5%, has a way to climb before assuming a respectable mid-30s position. From here it will need to produce a fully costed and progressive alternative budget next week to offset National’s chance of convincing punters its economic governance outweighs its penchant for greasing the hands of its wealthy donors – a practice made more awful considering its want to dish out a large helping of arrogance to the average Kiwi voter, and its lust to put the boot in to those fallen on hard times.

That said however, and acknowledging the challenges, as Labour leader David Cunliffe said some months ago… It’s game on!