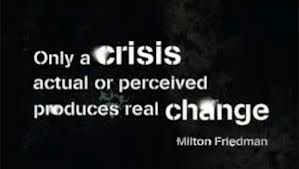 The purposeful manipulation of extreme situations by governments for the benefit of businesses is the essence of disaster capitalism, where governments undertake rapid-fire corporate change in societies reeling from shock.  As well as applying to situations such as 9/11, the stock market crashes, and the Falklands War, it is being played out here and abroad in education.

It took little time, for example, for Hekia Parata to jump on Christchurch schools and start closing and merging them post-quake.  Changes would be necessary at some point post-quake, for sure.  But to strike that blow so soon, when houses are not yet repaired, communities are still in flux, and people are still under the most extreme stress is not just heartless, it is unnecessary.  So why do it?

The high lord of disaster capitalism, has an answer for that:

Not facts, research, and a sound basis for change.  Not co-operation.  Not a mandate from the people of your country. No. You need crisis.

So, if no actual crisis is handy but the government has changes it wishes to implement, what can government do?  Well that’s simple – create a crisis.

It’s something our government is doing in spades.

Consider just this past year or so.  There’s the supposed crisis in benefit fraud that allows for drugs testing, CERA and the removal of democracy in Christchurch, the crisis of potential terrorism that was used to justify the wholesale spying on ordinary citizens, and of course the manufactured crisis in education that has been used to push through reform after reform after reform.

And it’s not just here.  When it comes to education, these reforms are being pushed through world wide, by business and supported by government – and despite huge concerns and opposition from parents and teachers.

How does disaster capitalism play out in education?

Parents in England and the USA promised more choice, better schools, improved achievement have found themselves sorely disappointed.  The privatisation promise has rarely lived up to the rhetoric, with charter schools often bringing more problems than the state schools they replace, with fraud, mismanagement, and exclusion of pupils all of concern.

And no rise in achievement.

“Create a crisis, real or imagined, and then push through your reforms.”  So catchy it should be the title of National’s policy document.