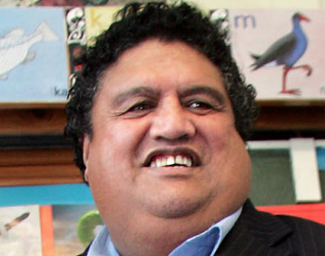 This week marks a year since we lost our matua Parekura. I was driving home to Gisborne from Whakatane when I found out he had passed on. I had been told that he wasn’t doing well just before I went out of cellphone range and when I came back into range my phone went nuts with all the texts and voicemail messages and I knew he was gone. I miss him.

I have had cause to think of Parekura a lot in recent weeks. Parekura would have been deeply unimpressed with the East Coast Regional Economic Potential Study released by Ministers Joyce and Brownlee in Gisborne last week.  I suspect the word “dastardly” may have been employed more than once.

The study was the Government’s consolation prize to the Gisborne and Hawkes Bay communities after refusing to fix a washout in the Gisborne to Napier rail line leading to the decision in 2012 to mothball the line. The report was meant to be a “deep economic analysis” of the regions potential, challenges, and infrastructure needs. What it turned out to be was a $180,000 whitewash which predictably bags rail and promotes oil and gas exploration as the regions economic saviour. While the study highlighted a number of areas of strength and weakness for the region it doesn’t really tell us anything we didn’t already know.

It is true that our roading network will come under increasing pressure as forestry harvesting rapidly increases up and down the East Coast, (and deeply worrying that this blindingly obvious fact seems to have come as a great surprise to our transport Minister), but the study focuses solely on the state highways and not the regional roads which will also need attention. But instead of supporting regional roading networks, the Government has starved regions of funding for the maintenance and the building of regional and rural roads.

The study acknowledges that there is potential for rail but predictably takes a very narrow view in the extremely brief analysis of that potential stating that rail freight volumes were low when the line was operational and therefore that proves the line is not viable. However when you put some context around that you get quite a different picture.

For example the study doesn’t mention the challenges we faced in getting businesses to have the confidence to sign up to a rail line that was actively under review by an anti-rail government.  It doesn’t mention the shortage of rolling stock made available by KiwiRail – in fact a report to the Hawke’s Bay Regional Council transport committee at the end of 2011 highlighted that it was a lack of rolling stock, not a lack of demand, that was stopping even more freight going by rail. The study also fails to acknowledge that when KiwiRail invested in the line, just months before the washout, by lowering the tracks through some of the tunnels to accommodate the new 40′ high cube containers demand for the line took off and the line was very well used for the 2012 produce season.

All this is before we even factor in the environmental, public health and safety benefits of rail. The study also highlights international tourism as an area of potential for the district and yet we know that one of our most popular tourism ventures was the restored steam train Wa165 which is no longer operational following the mothballing of the line.

The study highlights a number of industries that could potentially create job growth but typically Minister Steven Joyce zeroed in on oil and gas exploration. Putting aside the very real environmental concerns it is worrying that the Government continues to put all their economic development eggs in this one basket.  While Minister Joyce is correct in saying that a significant discovery could indeed lead to jobs and economic growth, it is far more likely that there won’t be any such discovery. At the very least, regardless of whether or not the Government continues to aggressively pursue oil and gas exploration, we deserve a plan B.

But my favourite part of the study is the genius assessment that some parts of the East Coast have a problem with being “ . . . perceived by some as ‘socio-economically deprived’ . .” Actually, large parts of the East Coast ARE socio-economically deprived. We don’t have a perception problem — we have a poverty problem. That’s why regional economic development is so crucial.

What is really missing in this story though is a plan from Government laying out how they intend to assist our region to achieve our full economic potential. It’s not good enough to simply drop a report at our feet and do little more than point to existing programmes – given they clearly haven’t had the intended impact thus far.

We don’t need a $180,000 government study to tell us we need to up-skill our workforce, retain talent, create jobs and develop new industries. What we need is a clear plan from central government laying out how they are going to pro-actively assist our region to achieve these goals.