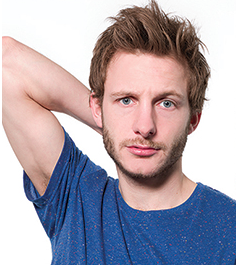 The self-titled ‘other Chris Martin’ is a young English comedian who charms his audience almost immediately. His latest show at the comedy festival, Responsibilliness, is an exercise in easy, well-crafted observational humour that has the intimate flavour of having a great conversation with a funny guy.

Regrettably, my ability to reflect on the completeness of the show is somewhat limited as I was a little late. Martin didn’t let me get away with my attempt to enter incognito when he, un-phased, diverted from his set to swiftly deal to my tardiness.

Seamlessly, Martin adapts his polished and thought-through work to give it a fresh, off-the-cuff feel. He is one of those comics of a higher class who maintains a certain composure and confidence that inspires the trust of his audience. It is this slickness combined with his own brand of sincere relatability that makes Martin such an enjoyable performer. Would highly recommend.

Chris Martin’s Responsibilliness is running until Saturday 3rd May at Q Theatre, after which he will perform from 6th – 10th of May alongside his comedy partner Carl Donelly at the Hannah Playhouse in Wellington.