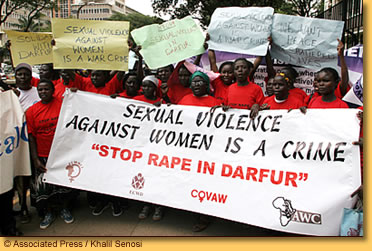 The world’s concentration span when it comes to African conflicts is limited. But, even when the mainstream media’s spotlight is shining on the world’s hotspots of violence, sparse attention is given to the prevalence of rape. We hear figures on numbers of deaths and numbers of refugees, but rarely on the numbers of women and girls sexually assaulted. Rape statistics are, of course, difficult to calculate. But, death counts are also often sketchy and this does not stop the media’s fascination with them. At least one of the reasons why rape is so under-discussed is that it is a horrible topic to contemplate. Somehow we have become used the hearing about large-scale killing on the news, but reports on mass rape still make us feel uncomfortable.

So, sorry to make you uncomfortable, but I think it’s important you know that rape has been a regular feature of life for many women in Darfur since the region was plunged into violent conflict in 2003. By 2010, some estimates were as high as one woman in three having suffered sexual assault. As the conflict has re-escalated over the past 18 months, so has the number of rape victims.

Equally, you may not want to hear that across the border in South Sudan, mass rapes have become regular since the renewed violence broke out in late 2013. Particularly appalling are recent reports of the growing level of ethnic hate speech, inciting people to kill and rape.

It may also make you a little squeamish to read that in Central African Republic, Seleka rebels have committed numerous rapes, including those that reflect the religious dimension of that conflict, such as the rape of Catholic nuns in February.

The list goes on. A United Nations report released last week named 21 countries where sexual assault was used in conflicts in 2013 alone. The report names high profile wars such as Syria (where an estimated 6,000 women have been raped since the start of the conflict) and Afghanistan (where sexual violence is believed to have increased by 25% in 2013), but also highlights the prevalence of gender-based violence in less publicised conflict zones such as Guinea, Nepal and Yemen.

Rape has been a weapon of war for centuries. Kill the men, burn the village and rape the women is a centuries-old tactic; in recent times seen most brutally in Darfur. But, whilst sexual violence as a deliberate strategy is a well studied phenomenon, the potentially larger scale tragedy is not conflict-motivated rape, but post-displacement rape.

In modern conflicts, people forced to flee their homes for fear of violence far outnumber those suffering from direct attacks. Successfully fleeing fighting does not, however, mean an escape from the threat of rape. Whereas the risk of rape by enemy combatants may have been avoided, the threat of sexual assault remains because wherever there is social upheaval, the threat of sexual assault increases. The loss of housing, the breakdown of neighbourhood networks, the death of family members and the lack of familiarity with new surroundings all contribute to a weakening of protective social infrastructure and it seems that in all societies, there are men who will take advantage of such circumstances in order to assault women.

The perpetrators do not only belong to “enemy” groups; they are likely to be fellow conflict victims. Even those supposedly there to protect civilians are often guilty, such as the notorious cases of UN peacekeepers committing rape whilst on missions in Congo, Burundi and Ivory Coast. This all equates to the tragic reality that whilst a man in a conflict zone can often successfully flee physical violence, a woman cannot flee sexual violence; the threat follows her as she is fleeing and may even increase.

The phenomenon is not only African and it is not always conflict-related. Following the Haiti earthquake, sexual violence against women and children is thought to have affected one in fourteen families with incidents of rape reported to be 20% higher amongst those forced out of their homes by the disaster. In New Orleans, horrible stories emerged of women raped inside the Superdome stadium where thousands took shelter following Hurricane Katrina. In such situations, women were not being raped because there was a war going on or because they were members of an enemy group. Rather, to quote the New York Times, “women in [disaster zones] are being raped for the same reason that women everywhere are raped: because there is global impunity for violence committed by men against women.”

Although, a number of international initiatives – such as the International Campaign to Stop Rape and Gender Violence in Conflict – are gathering momentum, not enough is being done to tackle this problem. Rather than point the finger at international organisations, though, the starting point for all of us – men especially – is to start feeling a little more uncomfortable about the fact that rape is taking place all over the world and on such a horrifying scale.