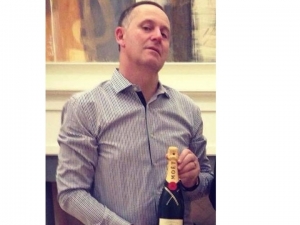 I’m sorry, but seriously – what the hell? Since when did bloody National give a rats arse about low income NZ? They govern for the rich! They have raised GST which hurts low income families hardest while borrowing billions in tax cuts for the richest NZers.

Labour is proposing increasing the minimum wage, backing the living wage, reducing power bills and making housing affordable! What the Christ have National suggested for those on the bottom other than punitive welfare policies, demanding Housing NZ screw the poor over for a revenue return, and make it more difficult for first time home buyers to get into a house while overseas investors buy them out of the market!

I’m sorry, but these crocodile tears for the poor by National are as disingenuous as Key’s sudden concern for animal welfare.

If only John Key could care about the welfare of the 285 000 children living in poverty as much as he does for animals tested with legal highs. Isn’t it extraordinary how quick Key can move when the poor liddle fluffy animals are at risk yet sit on his hands as children go to school hungry.

This monetary policy will lead to lower interest rates and a more competitive dollar which will help manufacturing build higher waged jobs in NZ. Why would we want to piss dollars away for higher interest rates to feather the nest of the Ozzie banks? We need to support our exporters with a more competitive exchange rate so we can compete with the rest of the world. In the long run, low income and middle income NZers will benefit from lower rents and mortgage repayments. When you add that to the raft of other policy Labour are suggesting, (increasing minimum wage, backing living wage, reducing power bills and making housing affordable) low income and middle income families will be far better off than under National!

Listening to National cry crocodile tears over low and middle income families when the Government have done nothing for those families in 6 years is tedious and eye rolling.

Key and National have abdicated their responsibility to NZers by refusing to have an active role in the economy. After hearing what Government can’t do for 6 years, NZers want to hear what the Government can do for them. Labour are providing those answers.