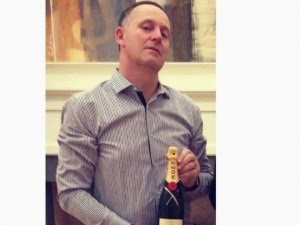 Happy Easter everyone, bad weather aside.

A previous post of mine was called “The Government with no ideas”.  Unsurprisingly, the theme of the piece was of a current government thoroughly absent of any creative ideas or solutions to assist more New Zealanders achieve a decent standard of living.

Well, they still have no idea.

You might not have realised it, but we actually reached a fundamental point in history this last week.  In the future, people will look back at this time and say: “that is when things changed!!”.

The release of the concluding part of the fifth and final report from the Intergovernmental Panel on Climate Change (IPCC) occurred on 14 April 2014 and represents a marker in history.  From now on, there is simply no doubt.  The science is out, and climate change is in.

The sceptics are scurrying away into silence, their increasing marginalisation by the Tsunami of evidence only outweighed by their motivation flowing from matters other than scientific.

But, the response from our government has so far been deafening in its silence.  Indeed, the only related and contemporaneous action has been to approve further exploration permits, including over pristine and protected land (of which the Minister was ignorant – he’s lining up Aorangi next!).  I could appreciate the irony more, were it not so symptomatic of an abdication of responsibility and leadership.  Yet further proof of this government’s genuflection at the altar of profit.

The thing is, though, I’m not much of a scientist.  I probably couldn’t even turn on a Bunsen burner these days.  Nor am I much of a greenie – I mean, I like recycling, but I also like to shower fairly regularly.  So, a commitment to the environment and mitigating the impacts of climate change has never really been at the centre of my personal or political philosophies.

I am, though, a pragmatist.  I believe in confronting problems head on.  There is simply no point putting your head in the sand and ignoring the challenges you face, especially when you are talking about the responsibilities of our elected representatives.

This government is happy with the head in the sand approach.  Captured by privileging short term wallet expansion over long term survival, the short term wins out every time.

One of the refrains we hear from this government is that there is no point for New Zealand to set ambitious targets or take other innovative steps without a binding international agreement.  Taking that argument further, the theory is that New Zealand companies would be at competitive disadvantage if put to higher standards.

Superficially, this argument has some appeal.  But, I don’t buy it.  My concern, especially following the IPCC reporting and the shift towards consensus that international action is required, is that New Zealand companies and industries will be caught short.  Ultimately, we will be less competitive.

This is particularly so given our isolation.  A global food shortage might sound great right now for New Zealand’s industries, but it won’t help much if we can’t transport our products anywhere.

Waiting for an international treaty just leaves us behind the curve.  We need to be in front of the curve with our sectors ready and able to ship their goods and sell their innovation to the world.

I would confront this by trying to come up with strategies and targets, but I would not want to impose these.  For this to work, I think you need buy-in and committment.

I would set up a cross-sector task force with an aggressive mandate.  Constituents would include scientists (like Professor Ralph Sims who is a member of the IPCC), Iwi, industry representatives, and members of civil society.  Shoot, Richie McCaw too – he makes his living off grass.

No politicians though.  This needs to be non-partisan.

I would set up a three day summit where New Zealanders can come and submit ideas and thinking to the task force.  We could have speakers address key themes and possible solutions.  The summit would have side events focused on green technology, sustainability awareness raising, and specific sessions targeted for school kids.  Civil society and advocacy groups can create their own side events on specific issues.  There will be an online interactive space where New Zealanders can also engage – by submitting proposals, posting videos of great inventions, and voting on already submitted ideas.  It will be a national discussion, where those who want to participate, can.

Let’s create some energy around solutions.  Let’s bring people together.  Let’s do something.

Yes, it might be hard to come to an agreement and of course there are flaws in my idea.  But, this is the biggest challenge facing our planet right now.  If we do nothing about it, then what does that say about us?