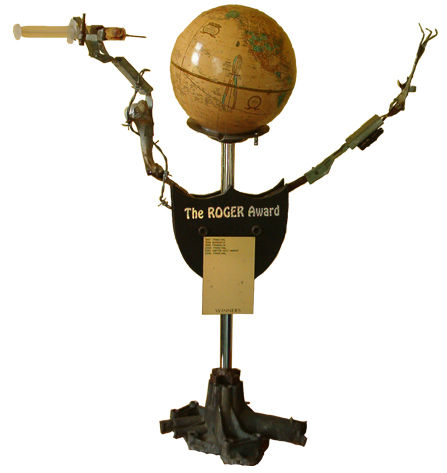 The criteria for judging are by assessing the transnational (a corporation with 25% or more foreign ownership) that has the most negative impact in each or all of the following categories: economic dominance – monopoly, profiteering, tax dodging, cultural imperialism; people – unemployment, impact on tangata whenua, impact on women, impact on children, abuse of workers/conditions, health and safety of workers and the public; environment – environmental damage, abuse of animals; and political interference– interference in democratic processes, running an ideological crusade.

It won the 2011 Roger Award and was runner up in 2012, 2009 and 08. One 2013 nomination said simply and in its entirety: “Blackmailing country”. So, 2013 saw more of the same from the biggest recipient of corporate welfare – the Bluff smelter is the biggest bludger in the country. The 2011 Roger Award Judges’ Reportconcluded that the company has a 50 year history of “suborning, blackmailing and conning successive New Zealand governments into paying massive subsidies on the smelter’s electricity; dodging tax, and running a brilliantly effective PR machine to present a friendly, socially responsible and thoroughly greenwashed face to the media and the public”. The 2012 Judges’ Report is more succinct: “…it has us by the balls and has continued to squeeze ever since. It is corporate welfarism, but somehow doesn’t attract the same vindictiveness as the sickness beneficiary”.

To quote from the 2013 Judges’ Statement by Chief Judge Wayne Hope: “Rio Tinto’s Roger Award success boils down to two factors. Firstly, its’ preferential treatment over pricing levels (in a market which it dominates) and the resulting effects on residential power bills, has had a major social impact. Any individual who relies upon the electricity grid for his or her everyday life is directly or indirectly affected. The scale of Rio Tinto’s impact on people is greater than that of any other finalist. Secondly, Rio Tinto’s political interference in the democratic process was very high, systematic and continually reinforced. In this respect it should be ranked slightly ahead of Sky City and well ahead of all other contestants. So, from a high class field, Rio Tinto takes the trophy for 2013”.

And here’s the concluding paragraph from the 2013 Judges’ Report, incorporating the Financial Analysis: “Cheap electricity, research and development grants, ETS (Emissions Trading Scheme) profiteering, a $30 million cash gift from the Prime Minister on behalf of the long-suffering New Zealand public, apparently very little income tax actually paid, especially since the restructuring, and now Rio Tinto is leaving it to the Government to clean up the mess the smelter will leave behind. The Roger Award is in deserving hands”.

It was nominated by several people because of its “more pokies for convention centre” deal with the Government. One nomination referred to the “current Key government essentially selling our laws in return for Sky City building an international convention centre” and to Sky City’s “ability to profiteer from others’ misery”. It concluded: “…Sky City is attempting to lock future Governments into this dirty deal. (It) is pushing for draconian compensation provisions should a progressive Government decide that it is not OK to pay for a convention centre to be paid for by others’ misery”.

“It is worth noting that our top two contestants were well ahead of the rest. All of our judges placed Sky City Casino in their top three… Sky City was a star performer in the political interference category. Any future Government with a mandate to end or modify the Sky City Convention Centre deal faces the prospect of legal action. This level of interference in the democratic process ranks alongside the machinations of Warner Brothers in 2010. Their interest in New Zealand employment law equates with Sky City’s attempt to future proof their circumvention of the electoral mandate” (Judges’ Statement by Chief Judge Wayne Hope).

It made its first appearance in the Roger Award line up of corporate villains (perhaps it should be called the chorus line). It was specifically nominated in the economic dominance category and, within that, for profiteering. To quote from the nomination: “Chorus continues the worst features of the old Telecom, from which it was split in 2011 (as a touted “solution” to those worst features). It strives to preserve a monopoly; it grossly overcharges and tries every trick in the book to keep those inflated prices, including special pleading to its backer and accomplice, the Government. This story is very far from resolved at the time of this nomination and it remains to be seen how it turns out. But it is yet another example of the corporate welfare for which this Government has become notorious – Warner Brothers, Sky City, Rio Tinto, Media Works and now Chorus. The list goes on”.

“Our judging panel placed Chorus well ahead of the also-rans… our 3rd place-getter scores highly foreconomic dominance, impact on people, and Government interference. As the Government’s preferred broadband contractor, Chorus can set its own pricing regime… Chorus seeks to maintain its market dominance by pressuring, and colluding with, the Government at the expense of the Commerce Commission. The Commission’s regulatory role on behalf of taxpayers and consumers is thereby undermined.  In sum, therefore, Chorus’s third placing is richly deserved” (Judges’ Statement by Chief Judge Wayne Hope).

No Accomplice Award For 2013

There is also an Accomplice Award for an organisation (not an individual) which was the worst Accomplice during the year in aiding and abetting transnational corporations in New Zealand to behave as described in the criteria. The Accomplice’s award is in addition to the Worst Transnational Corporation award and will not necessarily be awarded every year. There were several nominations for the Accomplice Award, all for the Government, mainly on general grounds. But the nomination for Chorus also nominated the Government for the Accomplice Award specifically in connection with Chorus. The judges decided not to present that Award for 2013 “because there is no competition” (as Chief Judge Wayne Hope told the organisers).

ANZ has been a regular finalist and won the 2009 Roger Award. In 2013 it was selected as a finalist because of profiteering, and treatment of its staff. One nomination specified “excessive pay for CEO; excessive profits; and charging excessive fees to customers”. ANZ is the first of the major banks to appear in court to defend the class action suit about excessive fees.

IAG was a finalist for the second consecutive year. The reasons why are distressingly well known to anyone living in Christchurch in the last three years. The nomination is worth quoting in full: “Because instead of making thousands of Christchurch house owners feel looked after and doing their job, they quibble, penny-pinch and weasel out of their obligations. They have worn people down until they feel stressed and defeated. Despite their PR hype, they don’t ‘Love Christchurch’. They love maximising their profits and pleasing their shareholders. They are hated and despised for their chain-dragging and changing the rules in the middle of the game. May they rot in Hell!”

Imperial Tobacco continued a long and dishonourable history of tobacco companies featuring as finalists and winners of the Roger Award. The very detailed nomination specified Imperial’s “crimes against the health and safety of its workers and the public; and endeavouring to expand its market in NZ, after the Government has committed to making the nation smokefree by 2025”. An extract from the conclusion: “Tobacco kills about 5,000 New Zealanders annually. It is the greatest preventable cause of death and illness in New Zealand… If Imperial Tobacco were genuine in regard to their corporate social responsibility, they would cease to manufacture all of their existing brands. Instead, they conducted ‘testing programmes’ where thousands of cigarettes were distributed to their employees in breach of the Smokefree Environments Act: they proudly boast a growing market share in New Zealand even after this nation’s Government has committed to making the nation Smokefree by 2025: and they cynically settle disputes with the agreement to donate thousands when their profits remain in the millions. They must be shamed”.

Talent 2 made its first appearance in the Roger Award because of the complete and utter balls up that is its Novopay payroll system for long suffering teachers. Media reports routinely use words like “debacle” and “mess” in the headlines about Novopay. It has become a byword for an expensive IT failure, which has cost teachers’ millions in missed or mucked up salaries, plus it has cost taxpayers millions more as the Government has attempted to get it sorted out. The nominator specified: “monopoly” and “impact on teachers, teachers’ families, administrators and schools in general”.

The 2013 judges were: Christina Stringer, a Senior Lecturer in International Business at the University of Auckland; John Maynard, from Wellington, President of the Postal Workers Union of Aotearoa, spokesperson for People’s Power Ohariu and founding member of the Brass Razoo Solidarity Band; David Small, a lawyer and Senior Lecturer in Education at the University of Canterbury; Sam Mahon, an artist, author and activist from North Canterbury; and Wayne Hope, Associate Professor, Communications Studies, Auckland University of Technology

The winners were announced at a Nelson event on April 15th (the first time the Roger Award event has been held outside of the main cities). Also announced at that event was the winner of the Roger Award online People’s Choice poll, which came to quite a different decision – the winner, by a landslide, was Talent 2. Which leads us to believe that some highly pissed off teachers must have led the voting. There is no equivalent to the Judges’ Report for that poll