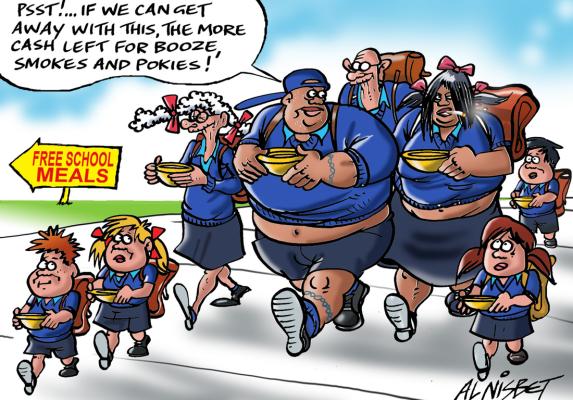 Racist Cartoon by Al Nisbet sums up the casual racism NZers enjoy
The New Zealand government must consider United Nations rebukes on their indigenous rights record as ordinary and unremarkable by their casual reaction to the latest indictment – delivered through the clear and clinical language of the Scandanavian heading the working party.
These criticisms are quite routine.  So much so that the government now expects these condemnations.  The government has taken their own inaction as proof the problem is insolvable.  The government does not take action to address the inherent consequences of running a settler state, preferring to rely on the pervasive ideological myth of being the least racist colony in the Empire – as if that peculiar (and undeserved) smugness alone was a general inoculation to any symptom of racism.  At least the government can be assured the media and civil society will largely ignore this report or react with reflexive indignation.  This defensive posture of denial by the Cabinet is precisely why the issues persist.  It is beyond parochialism.  There is barely any self-awareness at the top table of this South Pacific Euro trash tin shack mortgage mill.
The UN calls – as they do in all these sorts of reports – for a study, the result of which will place NZ on a decolonisation spectrum.  Not quite the official decolonisation list (with New Caledonia etc.) but that is basically the underlying tension and the untenable situation the government finds itself 100+ years after gaining control of the country.  Outside findings are incomfortable, they tend to start with a big popping sound.
It wouldn’t be NZ without a disproportionately high incarceration of Maori – that social calamity is just part of the price Maori are forced to pay for their colonisation, and the relative advantage enjoyed by the settler people that all the focus is on kicking a brown guy and not them.  It is a symptom of NZ.  It is NZ which ought to be diagnosed as the illness.  It is NZ that is imposed on the country on the premise of a mandate it knows it has abrogated wholesale.  The thing for which the invading military occupiers gave their lives in the Land Wars, according to the monuments erected by the triumphant government, was not the Queen, not the Empire.  Those mercenaries died “for New Zealand”.  They killed and burnt and looted and raped and occupied and exploited for the settlers yet to come, for that New Zealand, for the quarter of the population born overseas, for the whole system.  This is the current New Zealand. This is the tension.
Everyone seems to accept this at some level: that gangs, self-destructive and anti-social behaviour, resistance to authority, and survival at the social and economic margins by the natives is what happens when a European race takes over a nation, reduces them to a small minority, and attempts to make the native ways illegal and the white ways the only way.  Pakeha – however much they are conscious of this essential racial disadvantage – remain largely unconcerned; and Maori to the extent that they are the victims remain largely unheeded.  A large number of Pakeha remain products and adherents of the settler project, believing Maori are inherently inferior to themselves and their assumed European racial identity and culture (ie. they are racist) and that racial ideology or myth is conveniently reinforced by such statistics as that which have alarmed the UN working party.
Without the portfolio of the NZ Police – the cause in many instances and the main agent of criminalisation – the Maori Party Ministers propping up National are left with corrections and welfare to deal with the aftermath.  This cannot address the problem of detention figures and nor is it designed to – the tools are to be kept well away from anyone who may use them.  The white people would prefer to see unemployed Maori and Pacific people in jail than unemployed and in a gang or position where they could challenge their place in the order, but most of all white people would prefer them to keep working for them and doing what they are told, showing up with a guitar, providing instant culture to fill the void of a typical, generic Anglosphere settler existence.  Be colourful, but know your place.  Maori, on the other hand, are bereft, skeptical, angry, resentful, but remarkably patient.  Hoha.  NZ seems very much like that.
With the exception of population ratios and the passage of a century, there is little practical difference between the Rhodesian state and the New Zealand state: it’s beginnings as a commercial venture of British Imperialists, it’s objectives, methods – and ultimately – demise.  The difference in international treatment is entirely a historical point, there being no doubt that the outrages of the NZ government in the Land Wars of the 1860s and 1870s would have been met with the same sanctions and isolation that the Rhodesian government in the 1960s and 1970s faced as a result of confrontation with the indigenous population of Zimbabwe.  But ask the average NZer, Maori or Pakeha, and they will have no reference point in their bewilderment at the comparison and would reject the colony label despite the obvious constitutional position.  It’s staring back at us from every $20 note and other side of the coin and inked onto the foundation Treaty and stitched into the corner on the national flag the PM wants to get rid of.  Everyone born in NZ before 1978 is definitely a British Subject and the NZ Citizenship Act of 1977 is silent on whether that continues.  The Treaty is with the British Crown and their Governor, not a runaway settler parliament and their elected dictatorship.  These are the facts – no wonder no-one wants to know.  It’s all way too much thinking for the “average Kiwi”.
Pacific Media Centre reporting:

In a long instalment chronicalling the woes of colonisation the UN through its various bodies have never been able to persuade the New Zealand government – a settler state in conflict with the original people – that they are wrong.  Muldoon as PM preferred to attend the Olympics in 1976 and cause an African boycott.  What has changed?