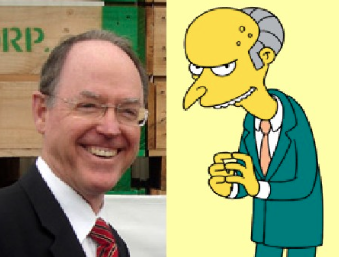 This week, amidst royalty, puppies, babies and Paula Bennett on the catwalk, it was Don Brash, former leader of the National and Act parties, former Governor of the Reserve Bank and, disturbingly, former roué of the Right, who thrust himself, shirt-unbuttoned, into the headlines.

Brash had never struck me as overly-endowed in the humour department. I might have to revise my view. Anyone who managed to lose the leadership of not one but TWO political parties and then calls their autobiography ‘Incredible Luck’ has to have their finger on the funny bone. In many ways,  it’s a kiss-and-tell book and Don emerges more a sexual animal than a political animal. Who would have thought? Who could have thought? But there he was, pictured on the cover of the Dominion Post, looking like an ancient, balding, bespectacled, hairy-chested former male-stripper: Don Brash: sex-machine. To think, this man came within a within a whisker of Prime Ministership.

Don writes in his book he wouldn’t be the first great man to swim in such warm, perilous, flesh-filled waters. He knows that “there is an extremely powerful biological urge which most men have to learn to control. The result of that drive is that many men take huge risks for the chance to have a sexual relationship. Among American presidents the names of John Kennedy and Bill Clinton immediately spring to mind.” Ah yes. JFK. Bill Clinton. The next name that immediately springs to mind is, of course, Don Brash. But we must be thankful for small mercies: “I have not had a large number of sexual partners, and none at all before my first marriage. But I have no choice than to admit that the number exceeds the number of women I was married to.” Spoken like a true former Governor of a Reserve Bank.

Reviewing the book in the NZ Herald, John Armstrong unattractively referred to the chapter of sexploits as ‘warts-and-all’: “Dr Brash writes that adultery was certainly not part of his Christian upbringing…He realised, of course, that some men were gay. “I have never suspected, even for a single moment, that I might be gay.””. Nevertheless, according to Fran O’Sullivan, Brash “doesn’t appear to know what side his toast is buttered on.”(Man of principle with political feet of clay/ NZ Herald).

For O’Sullivan, ” the more fascinating disclosure was the secret deal he and John Key hatched in a Blenheim motel room in late 2004 for Brash to hand over the prime ministership to Key before the 2008 election. That secret deal – which Key appeared to give credence to this week – does neither man any credit. New Zealanders are entitled to know who and what they are voting for.” In an election year, it’s a point well-raised. It might be all over for Brash but the PM is out there right now glad-handing one and all, letting the cameras into his (beach) house, positioning himself, as ever, as relaxed and open. After Sky City’s Convention Centre deal, after the Pike River families’ cash-for-justice settlement, after the top-drawer of trash on political opponents, this revelation speaks to a pattern. John Key is a man of of secrecy and deals, preferably in combination. That’s how he came into the role. And that’s how he intends to keep it. Fran O’Sullivan is right: “Both Brash and Key need to put a lot more on the table about this “deal”.

That’s not likely. As Tracy Watkins reported on Stuff, the PM is too busy perfecting his image as ‘Everyman’. “ He even managed to carry off a women’s magazine cover clutching a couple of guide dog puppies with wife Bronagh. The puppies were on loan from their real homes for the photo shoot, in which John and Bronagh are paired in soft pastel shades of blue and pink. It is a scene straight out of a political satire – one of those episodes where the spin doctors dream up stunts to boost their candidates’ appeal to women voters. And on any other politician, that is probably how it would come across. The puppy link is that the Keys sponsor four guide dog puppies and donated $20,000 to the Royal Foundation for the Blind on the day the women’s mag turned up. That the magazine cover manages to convey the impression that the Keys sponsored the puppies on behalf of baby Prince George probably didn’t evoke any protests from his office, even though that was blatantly not the case.” Ruthless political operators, men of secrecy and deals,  don’t clutch guide dog puppies on the cover of women’s magazines for political purpose. Do they?  Shhhhhhhhhhhhurley not?

“It’s not just the women’s mags that Key is careful to feed. He keeps in touch with gossip columnists, who oblige with quirky yarns about domestic life at the Key household; does many regular slots on radio, even on shows most people would never have heard of, such as the Farming Show (of “gay red shirt” fame); and he recently admitted phoning bloggers like Cameron Slater as well to keep them in the loop. That his busiest media day – television, followed by at least three radio interviews in a row – falls on a day in which his diary is already full with Cabinet meetings is testament to how much importance he places on these appearances to help cultivate the “everyman” image.”

This week, Campbell Live caught Everyman cultivating at home. Well, at his beach home. As Paul Casserly wrote in the NZ Herald “Like Game of Thrones, the visit to the Key’s beachfront bach in Omaha was a mixture of comedy and horror. Thankfully there was no sex.” (Unlike Don Brash’s book!) “It was relaxed, convivial. It was Key as we’ve come to expect him. Smiling, goofy. He was literally at home and so, felt at-home enough to call Bronagh her pet name, “Bing, Bing” in the presence of the cameras. “What did you call her?” Campbell asked. “None of your business,” said Bing Bing. John joked about the panda at the London Zoo and then admitted to being a Chinese spy by way of diversion.” Smiling. Goofy. Relaxed. Convivial. Pandas. Is what you’re seeing, what you’re getting? Are New Zealanders really entitled to know who and what they are voting for? Maybe we should ask Don Brash.

Tracy Watkins observed Key’s opponents would grumble that the puppy story and accompanying photos are a cynical election-year attempt to evoke an emotional response. “They are undoubtedly right.” she said. And undoubtedly, they are. To use a phrase immortalised this week by Simon Bridges, it’s ’emotive claptrap’. Blatant emotive claptrap. But isn’t that what political campaigns are all about these days?