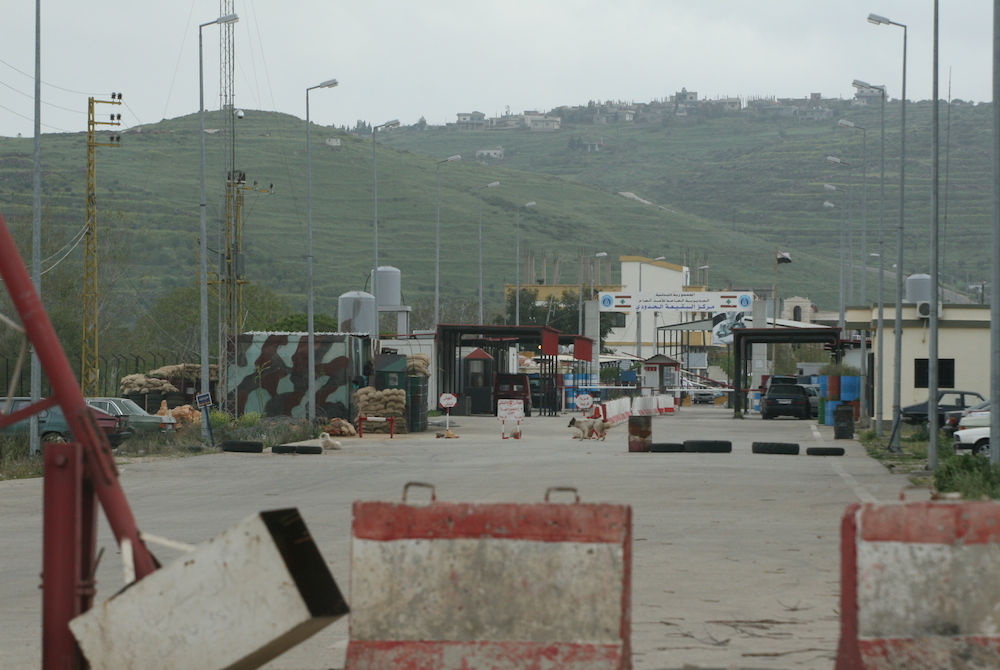 The civil war in Syria has now entered its fourth year, with some estimates putting the death toll at more than 200,000. The UN reported in September that six-and-a-half million Syrians have been displaced as a result of the conflict, of whom approximately 600,000 have fled to Jordan and a million to Lebanon. Many of these refugees are living in dire circumstances.

I SAT ON A ROOFTOP in the Lebanese village of Mashta as a Syrian government aircraft bombed the neighbouring village of Hosson, just across the border. It was a beautiful spring afternoon.

The jet made a terrible noise as it dived towards its target, and a cloud of dust and smoke billowed sideways and upwards from the town. The sound of the explosion rolled down the valley.

“Bashar is crazy,” said my friend Fouad, raising his arms and shaking his head in disgust. “He is very, very crazy.”

Bashar al-Assad, the president of Syria and a former eye doctor, was probably sitting in Damascus, unable to see his military’s handiwork in Hosson. But the craziness was clearly visible in Mashta – if you could get there, that is.

“You cannot go to the border,” an intelligence officer told me on my way to the town. “It’s a restricted area and you do not have permission.”

Fouad’s buddy Anwar had suggested we push on regardless. We jumped on a local bus and slunk in our seats down the back. The Lebanese soldiers at the next checkpoint were busy inspecting cars; they gave the bus to Mashta a cursory look and waved us towards the war.

Fouad walked to the side of his roof and pointed at the nearby hillside. He said a Syrian army rocket had exploded there recently after straying across the border, narrowly missing his home. “Crazy,” he said, laughing in disbelief.

He took me downstairs to the ground floor of his two-storey house, which he’d rented to a family of refugees – part of the human tide that has flooded Lebanon since Syria began to tear itself apart in March 2011.

The numbers were hard to believe, but Syrian refugees were everywhere. Like many, the ones in Fouad’s house had come from the embattled city of Homs, once an hour away by road but now in another world altogether.

They had an anxious and unsettled look, which was hardly surprising given the horrors they had witnessed. They’d arrived with little more than the clothes that they were wearing, yet refused to let the westerner leave without offering their hospitality.

“Please,” one man said, “You must join us for tea and food.”

Other Syrians were clustered nearby – some in a refugee camp, others in a school. All of them had the necessities of life, but their conditions were otherwise woeful. Some of the kids played soccer; others stared at me through sad and distant eyes.

I wondered how the refugees could sleep at night when the throaty thunder of bombing in Syria could be clearly heard in the distance. I wondered how it must feel to be on the safe side of the border while your friends and relatives were trapped on the other.

By the end of the day, details of the bombing I’d witnessed had filtered through from Hosson: half-a-dozen women and children were reportedly among the dead and injured – relatives of people in Mashta. The reaction was muted, one of helplessness rather than anger.

Every refugee we met had the same view on the state of life in Syria. The situation in Homs was very bad, they said: fighting was fierce and there was hardly any food. Hospitals were packed but medical supplies were exhausted.

Bashar’s soldiers were entering homes and killing civilians, they added – even dragging the wounded from their hospital beds to shoot them. Who would come to their aid, they asked me. Where was the international community?

A few of the Syrians had jobs, like the baker I met that week in a shop on Mashta’s main street, churning out naan bread and pizza. “New Zealand!” he said, as if it were paradise.

Fouad and I took some pizza and went to a clearing in an olive grove to chat with local Lebanese. Like most in the town they had relatives in Hosson; all were opposed to the Syrian government, and all supported the rebels that were fighting Bashar’s forces.

They showed me cellphone video of the fighting and pictures of the dead and wounded. One showed a little girl with a puzzled look and both legs torn off at the knee, her shredded and bloodied skin hanging horribly in folds.

No one knew what to say. Fouad just shook his head.

Later he drove me around Mashta in his bloated, belching Mercedes, pointing to buildings pock-marked by bullets.

“Look here, Mr Jon,” he said, parking by a house near the border. “Army Syria do that.” He shook his head again.

“Be careful,” he added, as we got out of the car. “There is very danger. Soldier Syria, he shoot anytime.”

A handful of locals had been crossing the border to shoot back at the army – so-called mujahideen, committed to defending their Sunni brethren from Bashar’s Shia-led regime, which is backed by Shia-dominated Iran and the Shia militant movement Hezbollah. Mustafa was one of them.

We found him at his parents’ home, so close to Syria that we could clearly see one of Bashar’s tanks – a low dark shape in the tall grass; a metallic crocodile waiting to strike. In the distance, on a ridge, perched a Syrian border tower.

Mustafa was 25, slightly-built and softly-spoken, with short black hair and a semi-beard, wearing jeans and a faded green jacket. He sat in the living room watching news about Syria on satellite TV.

For Mustafa the war was deeply personal: his father was Lebanese but his mother was Syrian, and his relatives in nearby Hosson were among those suffering. One of his cousins had been killed there.

“I went to fight in Hosson because Bashar sent his aircraft not to kill rebels but to murder women and children,” he told me. “It is dangerous, but I’m not afraid of dying.”

Mustafa said he’d fought with the rebels on three occasions in the past two years and was planning to go back soon to Syria. He invited me to join him.

It was tempting, but risky. “Thanks,” I replied. “Maybe later.”

I called Fouad when I returned to Lebanon in autumn, hoping to arrange another meeting with Mustafa. But Fouad had bad news.

“Mustafa mujahid is dead,” he said, using the Arabic word for Islamic holy warrior. He told me Mustafa had been killed a few weeks earlier, during heavy fighting at Hosson.

To his family and friends he’ll be a shahid – a martyr who gave his life in a righteous cause, defending Sunni civilians from the army of a Shia tyrant. To me it was just another pointless death in a savage and senseless war.

Jon Stephenson has received numerous awards for his journalism, including the Bayeux-Calvados Prize for War Correspondents which he won in 2006 for a two-part Metro magazine feature from Iraq, and again in 2011 for his investigation on New Zealand’s involvement in the transfer of detainees to torture in Afghanistan – again published in Metro magazine. This is Jon’s first feature published in TheDailyBlog.

WANT TO HELP? Donations for emergency relief to Syrian refugees can be made to any of the following organisations: