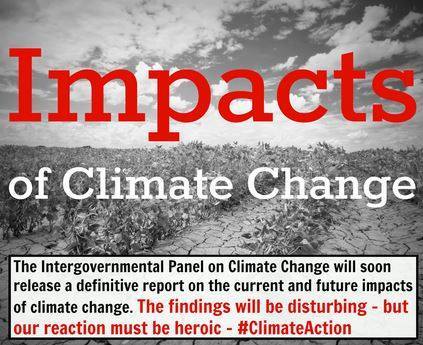 Last week, the IPCC released the second part of its fifth report (AR5), covering the current and expected future impacts of climate change. It emphasised the need to get on with adapting to the climate changes that are now inevitable — like substantial sea level rise, increased droughts and more flooding rains. The reaction from those who’d prefer we take no action to address climate change was straightforward: all we need to do is adapt – and (by selective quotation of the report and considerable wishful thinking) it isn’t going to be too difficult to adapt, because it’s all a long way off. For a prime example of the latter, all you have to do is listen to climate change minister Tim Groser’s insouciant dismissal of the urgency of adapting to climate change when interviewed on RNZ National’s Sunday Morning programme last weekend, or new ACT leader Jamie Whyte’s silly assertion that adaptation is all the action required.

You’d think they might have looked at the IPCC’s calendar. Next week, the organisation releases the third part of AR5, the bit that deals with the importance of reducing emissions. All those who argued that adaptation is all we need to do are going to have the inconvenient task of acknowledging that we are a long way from meeting any kind of sensible target to reduce emissions, and that the task of preventing really dangerous climate change — a world that warms more than 2ºC — is getting more and more difficult with each passing year. Staying under two degrees of warming now looks as though it will involve sucking CO2 out of the air — a hugely expensive and unproven process once you get beyond planting trees.

The simple truth is that we (as in the entire global community) have to adapt to the changes that are inevitable, and reduce emissions as fast as possible to prevent climate change going far beyond adaptive capacity and into the realms of real catastrophe. Sensible risk management would involved planning to cope with four degrees, while reducing emissions steeply in an attempt to stay under two degrees.

Reducing emissions is, if anything, more urgent than adaptation, because every tonne of carbon saved now is a tonne we don’t have to extract from the atmosphere later in the century, and future extreme damage avoided. But we can’t sit on our hands and ignore the need to adapt. Groser’s government needs to recognise that it has to coordinate the adaptive efforts of local authorities, not by issuing edicts from Wellington, but by providing a legislative and knowledge framework, rooted in the work of the IPCC but also using local scientific resources, that allows local communities to make sensible plans for a future where the sea is rising rapidly, floods are broaching drainage systems and droughts are testing water supplies.

Unfortunately, a climate change minister who can haughtily describe sea level rise over the next century as something we can easily adapt isn’t likely to take the IPCC report findings as a basis for policy development. Perhaps urgent reality will be able to do the trick. It now looks very likely that a big El Niño event is brewing up in the Pacific. This year and next could become the hottest years in recorded history, and bring weather extremes that might force politicians take warming seriously. It’s a sad thing to have to say, but it will take disasters to force reluctant politicians to act. We can only hope they pull their fingers out before the toll becomes unavoidably catastrophic.