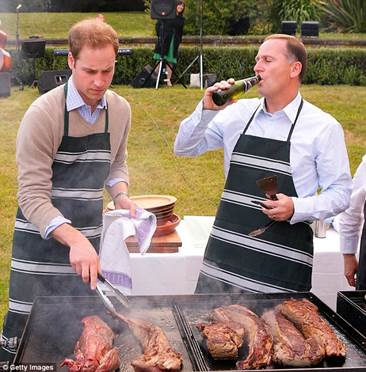 WHERE WAS DAVID FARRAR when John Key needed him? The answer turned out to be: “In Nepal.” Which, as excuses go, is a pretty good one. Even so, the Prime Minister must have been annoyed. Without the usual briefing from his trusty pollster he’d would be flying blind with the media. When he picked up the phone to the new co-host of Radio New Zealand’s Morning Report, Guyon Espiner, this morning (7/4/14) the Prime Minister’s only option was to take a deep breath and just trust to luck and his own, unaided, political judgement.

After all, it wasn’t as if there was anything particularly taxing on the news agenda.

Sure, there’d been a natural disaster in the Solomons, but not even Radio New Zealand could blame him for that! The simple fact is, tragedies like the Solomons flash floods always make whoever is in office at the time look and sound prime ministerial. Nothing beats dispatching an RNZAF Hercules when it comes to making a politician look both caring and decisive.

And, of course, the front page of the Herald was given over entirely to the imminent arrival of the Duke and Duchess of Cambridge – and baby George. Exactly the sort of fluffy, positive news story that the Prime Minister considers himself especially good at exploiting. And really, when it comes to the Royals, is there really anyone out there better than John Key? How many other world leaders get to sit in front of a small electric heater and swap baby stories with the Queen of England?

Not bad for a boy from Burnside!

Having successfully dealt with the tragic stuff, the Prime Minister was only slightly taken aback by the earnestness of Espiner’s line of inquiry about the Royal Visit. That damned republican question again!

Why, oh why had he ever gone along with Helen Clark’s “a republic is inevitable” position. He’d never really believed it. Kiwis are a bit like Americans when it comes to royalty: all for equality and quick to agree that Jack’s as good as his master in theory; but just you bring them into ‘the presence’ and watch them go all weak at the knees. It’s why he brought back the knights and the dames. No one had a clue who belonged to the Order of New Zealand, but nobody would have the slightest difficulty in identifying the status of a “Sir John” Key.

Perhaps it was the thought of the dear old lady tapping him on the shoulder with a glittering yard of Wilkinson steel that prompted him to make a statement about the level of public support for the monarchy. Responding to Espiner’s questions, the Prime Minister declared:

“If you go back about six, seven, eight years – maybe a decade ago – and ask the question whether New Zealanders – if New Zealanders – want to become a republic, then I think the numbers would have been probably 60/40 opposed. Ask that question today and it would be 80/20 opposed. Even Australia, that, you’ll remember, had the ballot on this particular issue, is now much more in favour of the Royal Family. And I think that speaks volumes about the way William and Kate, as young Royals, have modernised the Royal Family and their place as the Head of State.”

Had the National Party’s principal pollster not been en route to a camp at the foot of Mt Everest, he would have been able to warn the Prime Minister that his confidence in the New Zealand public’s ongoing support for a British Head of State was singularly misplaced. Without disclosing any trade secrets, David Farrar, could nevertheless have gently intimated that among young voters (presumably the most impressed by William and Kate) support for the monarchy is rapidly evaporating and that nearly half of the Baby Boom generation have become convinced Republicans.

That, at least, is the guts of the press release issued this morning by New Zealand Republic Inc.

Far from the 80/20 split so confidently predicted by the Prime Minister, the Curia Poll (yes, that is David Farrar’s company) commissioned by New Zealand Republic Inc. shows that:

“[S]upport for a New Zealand Head of State has risen to 44%. Support from people aged 18-30 is at now at 66%. Support for using the next British Monarch as our next head of state has fallen to 46%.”

Among New Zealanders aged 46-60 (the Baby-Boomers) support for a New Zealand (as opposed to a British) Head of State stands at 48 percent. Only among older Kiwis (61 years and up) was there a majority in favour of a British Head of State. But, at just 53 percent, even that support was much, much less than John Key’s estimate of 80 percent of New Zealanders being opposed to abolishing the monarchy.

Not a big issue, you may say, and certainly not one upon which the 2014 General Election is likely to turn. True. But, what John Key’s statement on the Monarchy does reveal, is how radically mistaken the Prime Minister can be on public issues. Denied the guidance of his pollsters and focus-group interpreters, John Key was as sentimentally certain of the Monarchy’s enduring popularity as any other National Party MP – and just as wrong.

Proof, perhaps, that the explanation for the Prime Minister’s remarkable success and enduring popularity owes as much to the briefings he receives from what is clearly a stellar team of advisers as it does to the supposed superhuman capabilities of “Teflon John”.

This current jaunt to Nepal had better be David Farrar’s last expedition until October. (At least!) Because it would seem that Phil Goff may not the only political leader susceptible to an election-losing “Show me the money!” moment.