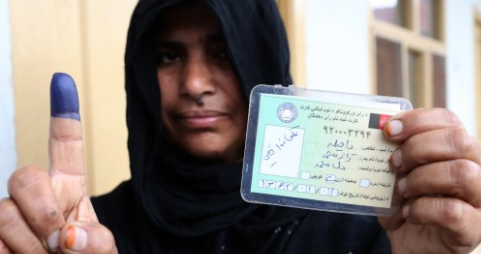 I am currently in Islamabad.

All of the focus here has been on the first round of the Afghan elections.  I have met a few international humanitarian workers who have come here out of caution to avoid the potential danger the elections posed.  Prior to Saturday, the feeling was tense.

Fortunately, though, the predicted violence has not arisen.  Yes, there have been some incidents, including the terrible shooting of two journalists in Khost.  The death of Anja Niederinghaus was a useless and reckless end to an amazingly creative and inspiring life.

But, overall, this first round has been deemed a success, with three million more voters turning out than the 2009 elections, according to BBC reporting.  Despite the very real and tangible threats from the Taliban and other anti-government elements, the people have turned out to participate in their governance.

Can you imagine that?  Risking your life to vote.

To stand in a long line outside a polling booth with people running around all over the place in a sense of seemingly organized chaos.

You stand outside, waiting for that chance to participate in your democracy, and the whole time you are exposed.  You look at every approaching motorbike or car with caution.  You want the line to hurry up.

But, you are going to vote.

Guess what?  This government doesn’t want you to vote.

This government knows that the fewer of you who really engage in our governance, then the less likely this government will be able to convince the electorate that it is generally acting in everyone’s best interests.

This is not unique to New Zealand.  We are seeing in other western “democracies” captured by neo-liberalism a strong conservative movement with the underlying aim of denying informed and full enfranchisement.

The recent United States Supreme Court decision McCutcheon was a natural and further step from the earlier infamous Citizens United decision viewing campaign donations as expression and thus worthy of constitutional protection.  The result of McCutcheon is to lift campaign donor limits to US$3.5million.  Music to the Koch brothers, but not the destitute people of East Detroit (where, actually, real music is made).

At the same time, more Republican controlled States in the US have taken up the Supreme Court’s invitation in a 2013 decision called Shelby County.  This removed fundamental protections in the Voting Rights Act to avoid voter suppression disproportionately affecting black voters, particularly in the South.

Further north?  The Conservative Canadians are having a go too.  According to an excellent article by Sally Young in Melbourne’s The Age dated 1 April 2014:

But, what about Aotearoa?  We haven’t seen an aggressive attack by the National Party on anything around voting rights, have we?  Well, with 800,000 not turning up, they probably feel they don’t need to.

Of course, this could be on the agenda were National to prevail in this election.  We don’t know.  Actually, we know very little about what National plans to do, apart from applying corporate models to education.

It helps that National has a compliant media.  A media more interested in personality than accountability.  A media so suppliant to government spin that the election has been called before we are even out of the blocks.

And, what happens?  We get a governance structure that is concerned with a consistent transfer of public wealth into private hands and a prioritizing of interests relevant to a small elite.  We see a narrowing of our private space and a growing subservience to international corporates.

What we don’t get is better outcomes for more New Zealanders.  We don’t see more money in more people’s pockets.  We don’t have a society where we prioritise and support the vulnerable.  We certainly don’t have anything approaching a long term plan to deliver a working and sustainable economy borne out of the lessons of the Global Financial Crisis.

So, there is one lesson we can take from Afghanistan.  It’s worth voting.