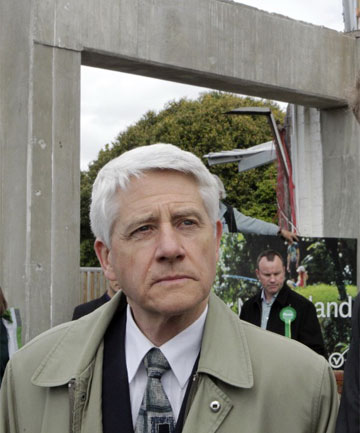 The Green leadership may want to take some notice of what some of their staffers in Wellington are doing. If the rumours from the Green conference in Auckland are to be taken seriously, some were busy slicing and hacking MPs who didn’t fall into their very narrow idealogical frame work. This is the very same clique who leaked the original party list to Farrar and is the reason why the party put the list out to the public to prevent the leak happening again.

This movement could see Kennedy Graham pushed down the list and that might be a terrible loss. If the Greens are to reach out to Winston and repair the damage Russel Norman inflicted upon him during the Owen Glenn affair, they must sit down over a bottle of Scotch and repair the relationship personally. If this repair is not done, then there is zero chance of a Labour led Government as the animosity between the Greens and NZ First will be simply unbearable and Winston will sit on the cross benches and make John Key’s life miserable for 3 years.

As enjoyable as witnessing that sounds, 285 000 children in poverty growing up in a climate change damaged environment don’t really have time for a personal political ego wank.

So if the Greens are serious about being the main part in a Labour led Government, they have to start finding bridges to build with Winston.

Enter the silver haired fox, Kennedy Graham. A man with the kind of fierce intellect and dignity of Kennedy could be the very person who Winston could bond with. It’s not that Catherine Delahunty couldn’t try and do this, but I’m just not sure if her offering to astral project with Winston would be the best way to engage with him. Bless Catherine, I really, really, really do love her.

Winston gaining 5% is no guarantee though. I still think there is a good chance that he won’t because the same pressures that propelled him over the threshold last election (Tea Pot Tape, Phil Goff moving with all the natural grace of C-3PO as a candidate) are not there so there’s no need for Russel Norman to go to Rainbow’s End with Winston. But fireside chats between two old silver foxes to build the rapport and trust necessary to implement a legacy project for Winston like a compulsory super fund that buys back the assets and for Winston to feel relaxed enough about a high proportion Green Cabinet with real ability to implement genuine green change to the economy doesn’t sound like a stupid idea does it?