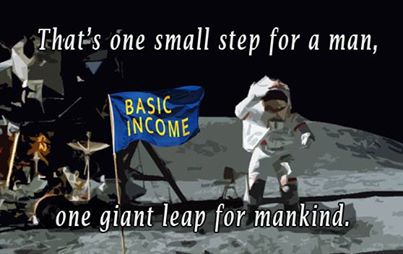 On The Nation on Sunday (30 March) Sue Bradford advocated for New Zealand to adopt a universal basic income (UBI) of $14,000 per (tax-resident?) adult. While such advocacy represents a heroic gesture on her part, it also represents a surprising lack of political realism.

To most journalists and politicians, such a UBI proposal is seen as the economic equivalent of a perpetual motion machine. It reinforces in their poorly-informed minds that this is simply a loopy idea.

On the contrary, universal basic income is a simple, powerful and realistic idea. The main problem is that it’s as poorly understood by many of its advocates as it is by those who pooh-pooh it.

I coined the term ‘universal basic income’ in a paper that was presented by Keith Wignall on my behalf at a symposium on ‘Citizen’s Income’ at the University of Waikato in 1991. My paper gained some attention, and I was subsequently invited to do an extended interview on the subject with Kathryn Asare, then host of the Saturday morning show on National Radio. This gained the concept much more attention, so I revised my original paper and published it as an Auckland University Policy Discussion Paper The Universal Welfare State incorporating proposals for a Universal Basic Income.

One interesting supporter of my position on taxes and benefits was, in the last year of his life, Sir Robert Muldoon. He gave my proposals favourable airtime on his Sunday afternoon show on Radio Pacific. Having recently done a little research on Sir Robert Muldoon’s political life, I realise that I should not have been surprised by his support of my position. (See my recent Economic History conference paper: New Zealand’s Income Tax in the Rollercoaster Muldoon Years: 1967-84.) Like many of his generation, Muldoon was an equitarian at heart. 1984 really did represent the end of the equitarian era in New Zealand politics and society. The neoliberal pre-post-war-baby-boomers (the generation born from 1935-1945) were always going to prevail.

The underlying concept proposed in my paper is the Basic Income Flat Tax (BIFT) approach to taxation and social security; it’s an approach that simplifies, humanises and integrates countries’ taxation and benefit systems. I simply added, to the Basic Income part of ‘Basic Income Flat Tax’, the concept of universal welfare that has underpinned New Zealand’s welfare society since 1938. I don’t think that I was the first to ever use the term ‘universal basic income’, but it was my use of the term that stuck, leading to for example the formation in the early 1990s of an advocacy group UBINZ, and leading to my participation in an international congress on basic Income in Vienna in 1996 (organised by the then ‘Basic Income European Network’). The term ‘universal basic income’ is now widely used internationally.

In this century I have distanced myself from the term ‘UBI’, however. This distancing is mainly due to the often irresponsible advocacy of the concept, and in particular because of the failure of others to recognise that the core concept of this approach to tax-benefit reform is the requirement for a flat (ie proportional) rate of income tax.

A large part of the resistance to the BIFT concept was the use by neoliberals of the expression ‘flat tax’ as a euphemism for ‘low tax’. Neoliberals rightly pointed out that proportional taxation was really the only kind of taxation that was equitable. But they then used that point of principle to argue that the wealthy should pay less tax, and by inference, that the poor should pay more. (Usually the neoliberals mumbled something about compensation so that the poor might be protected, but their promotion of low flat taxes – heard again recently by new Act leader Jamie Whyte – was rightly understood by non-neoliberals as a form of trickle economics.)

The Basic Income Flat Tax (BIFT) system is very simple. It says that everybody should pay tax at the same percentage rate, and that everybody should receive an equal basic income. A basic income is best understood as a return on public equity; a public equity dividend. While some very harsh neoliberals might favour a basic income of zero, enabling a very low flat tax, many neoliberals do advocate a form of basic income, commonly known as a negative income tax. (Sir Roger Douglas possibly thought he had advocated such a thing, but his proposals for a guaranteed minimum income were for something that was paid only to poor people. A basic income is paid to every adult. Benefits paid only to poor people always – ie by definition – create a poverty trap.) Most neoliberals favour a low basic income because they believe that wealth is for the most part generated by entrepreneurs, highly skilled workers and privately-owned capital resources. By rarely mentioning them, they implicitly downplay the importance of resources in the public domain.

It is really important to note that a BIFT system does not mean that a basic income replaces all other benefits. That’s the trap that Sue Bradford and others fall into. In order to protect all groups of beneficiaries, she seeks a universal basic income at a level that is unaffordable without huge tax increases.

To be viable as a mechanism that averts rising inequality, and that creates reduced inequality over time, a basic income flat tax system probably requires a flat tax rate of at least 33 percent (our current top rate, and trust rate), and a basic income payment set at around the level of an unemployment benefit or student allowance payable to a single person.

The good news – the news that must be emphasised by tax-benefit reformers such as myself – is that New Zealand already has the core of a BIFT system, and the rates presently levied (and paid) meet these requirements.

In 2014, ALL New Zealanders who earn more than $70,000 pay 33 percent tax and receive an annual basic income of $9,080. (BIFT is actually best understood as an alternative way of accounting for our existing systems.) Yes, if you earn more than $70,000 a year, you can calculate your disposable income simply by multiplying by 0.67 and adding $9,080. It really is that simple.

Further, maybe half of New Zealand adults who earn less than $70,000 also receive at least $9,080 from public funds.

Some of these are beneficiaries and superannuitants whose annual benefits currently exceed $9,080. Under our alternative BIFT accounting system, the first $9,080 of their benefits are a basic income; the remainder of their benefits are what economists call a transfer payment, and what many right-wingers call a ‘hand-out’.

A large proportion of those already receiving a basic income, however, are people in work on modest wages who also receive public income support in the form of family tax credits or accommodation supplements. For these people, their basic income presently comes in two parts. The first part (part A) can be calculated as follows:

The second part derives from the family tax credits and accommodation supplements that they receive.

Most other people – those who do not at present receive a $9,080 basic income – receive a basic‑income‑lite; a figure that falls short of $9,080, but in many cases is not far short of that amount.

We could introduce a UBI-lite in the 2014 Budget without incurring any fiscal cost at all. The only change would be in the way we account for income tax.

So what’s the point? What’s the benefit?

The benefit is that, with proper BIFT accounting – indeed with proper acknowledgement of public equity and the contribution of public resources to economic output – then the tax-benefit system can naturally evolve in an equitable manner.

The first stage of that evolution would be the progression from a UBI-lite to a proper public equity dividend, in which all adult tax-residents would be assured of at least $9,080 of publicly sourced income.

The second stage of that evolution would be changes to the present BIFT parameters of 33% tax and $9,080 basic income. As productivity increases – for example due to more labour-saving technology – then the natural adjustment to the BIFT parameters would be to increase both the flat tax rate and the level of basic income. Thus productivity increases could be accompanied by reduced income inequality rather than (as they are under present arrangements) by increased income inequality.

Within our liberal-democratic-capitalist system we already have the solutions to our greatest problems. Our challenge is to see what we have. We don’t need to advocate radical political solutions that create winners and losers. We all win when we learn to see the goodness in much that we already have, and to work with and extend those many good things.

For my recent substantive writing about flat tax, basic income, and public equity: