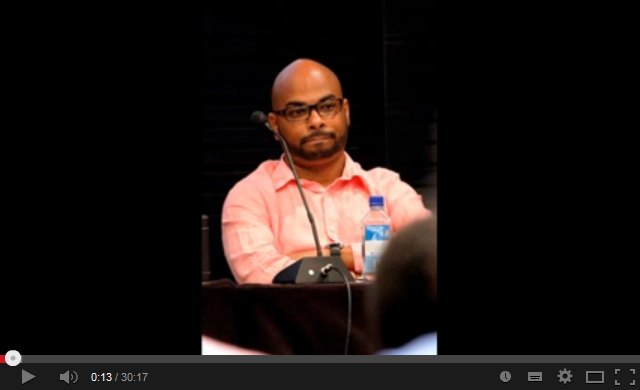 SO THERE we have it. Fiji’s Media Industry Development Authority chairperson Ashwin Raj is going to stamp out all hate and race speech in his country with the stroke of a decree-backed pen.

A momentous mind shift is going to happen just like that. The media “chilling” climate will ensure this unfolds. He thinks …

Raj is “quite perturbed by the level of public discourse” in Fiji as the country moves toward the return-to-democracy general election on September 17.

“Masquerading itself as an exercise in freedom of expression, political discourse has, in fact, descended to unabashed racial vilification and in some instances its content is tantamount to injurious or hate speech,” he railed at a MIDA media conference in Suva yesterday.

“What is even more disconcerting is the complicity of select Fijian journalists and media, either wittingly or those that remain oblivious to the laws of Fiji despite several awareness workshops on the Crimes Decree, the Media Industry Development Decree and the Constitution.”

His grand indictment of the Fiji media didn’t end there (with these quotes from his adjudication over a complaint to MIDA by Prime Minister Voreqe Bainimarama, no less).

After reading out his statement finding Fiji Television’s Fiji One News guilty of  broadcasting “hate speech”, Raj took the opportunity to attack bloggers, “rogue elements” in the media, and especially freelancers working for foreign media.

Without naming anybody in particular, it was obvious from his comments that he had Radio Australia’s Samisoni Pareti in his firing sights. Not surprising, given that the ABC had given his recent formal complaint against alleged “bias” by Pacific correspondent Sean Dorney the fob off.

Raj claimed that Fiji journalists were not reading the laws of the land, ie. the illegal decrees in force, such as the 2009 Crimes Decree, the 2010 Media Industry Development Decree and the 2013 Constitution.

He added to the journalists present: “You must be ethical at all times, responsible at all times – the world is watching 24/7.”

Back to his adjudication: What apparently got him riled and led to the “mandatory” media conference today was the “unfettered prominence” given to recent comments by Ratu Timoci Vesikula, a former cabinet minister in the Soqosoqo ni Vakavulewa ni Taukei (SVT) party of former coup leader Sitiveni Rabuka defeated in the 1999 election.

Ratu Timoci claimed at a Tailevu Provincial Council meeting, broadcast by Fiji One News on April 1, that racism was a “fact of life” in Fiji and he challenged Bainimarama on several points.

But the statement that Raj specifically attacked as being in breach of the Constitution’s Bill of Rights was:

“From the past experiences, this group of people, known in Tebara as the Vasu (referring to Indo-Fijians) will try to pacify you, assuage you just to have their aspirations met. These people do not want you to lead them. Let me warn you that the upcoming elections will be a tough one because even though we have lived together for a long time, you can’t mix water with kerosene.”

Rejecting his finding as being an “impingement on the freedom of expression or dismissed as yet another instance of gagging media freedom by MIDA”,  Raj cited s. 24 on “Offences relating to content regulation of the Media Decree”, stating:

The MIDA decision was, in short: