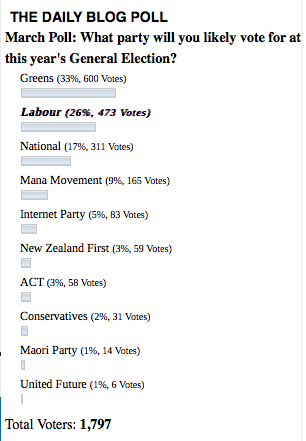 The Daily Blog’s April poll has been kicked off, asking readers: What party will you likely vote for at this year’s General Election?

We will continue TDB’s site rolling poll, one poll for each month, through to the General Election.

Comparing the results will provide readers an interesting account of how this audience cumulatively accesses each party on merit and performance.

As you can see from the graphic (left) the TDB March Poll saw 1797 people vote, pushing the Green Party to the top with 33% (up 2% on the February Poll).

How the poll works: 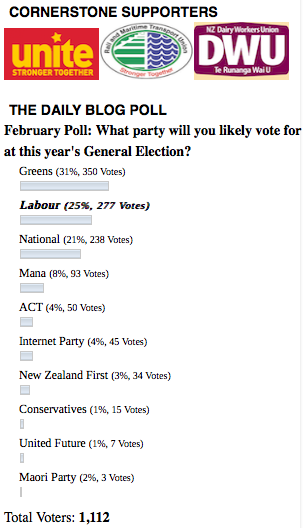 So you know, each person gets to vote once for one single party of choice. So choose well.

We have settings that restrict the number of times a person can vote from their personal computer and IP. That is an attempt to prevent a person voting repeatedly, if we allowed that the results would not give us a sniff of the audience’s view overall.

For the record, TDB does not claim this poll to be scientific. We run it on TDB as an indicator of the cumulative audience’s political preferences. We also run it over a sustained period so as to reduce the manipulation effect that sudden flight arrivals of audiences pushed here from other sites may have on the results.

– Click here for the summary of the previous February Poll.