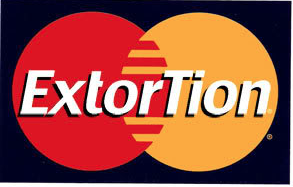 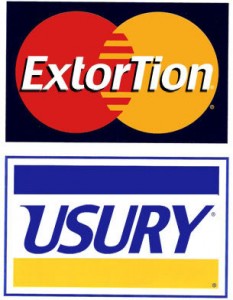 Now that the Reserve Bank has intervened in the credit market to raise interest rates in New Zealand, and has signalled a phase of rising interest rates that may last from 2-4 years, we need to examine what this really means.

The concept of savers’ entitlement to interest has become so ingrained in our thinking that very few of us – whether on the political right or political left, whether economists or taxi‑drivers – can see any way of questioning this entitlement. It hasn’t always been so.

In Northern European languages the words for ‘debt’ tend to be closely associated with the concept of ‘sin’. Yet in Islam and classical Catholicism, it is usury that is sinful. And usury properly means the act of lending for the purpose of extracting interest.

Before further consideration of the concept of interest, I would like to note some comments arising from my dailyblog on ‘miserliness’ (14 February 2014).

Contrary to one reader’s claim, I made no attempt to define ‘political miserliness’, but I did define miserliness as the intent to “make money but only spend a portion of it”. This means that misers are not necessarily like Dickens’ character ‘Scrooge’, or Shakespeare’s ‘Shylock’. Many misers appear quite affluent.

Misers are people who, through neither purchasing consumer goods nor investment goods, frustrate the circular flow of income and spending that is the essence of an operative economy. Further, misers’ life‑principle is to save – which means to ‘own’ ever-more debt. Thus for misers to permanently own increasing amounts of debt, then the rest of society must permanently ‘owe’ increasing amounts of debt. Owning debt is the counterpart of owing debt. Every dollar of debt that creditors’ own is owed by debtors.

The same reader says: “Perhaps you don’t understand what it is to be poor? My point is that you have failed to acknowledge that the poor borrow of necessity, not of choice.” I certainly would never dispute that quite obvious fact. We might note that the “necessity” of the poor to borrow from the misers is a direct consequence of the misers’ failure to spend. As Paul Krugman said: “Your spending is my income, my spending is your income”. The poor lack income because too many people don’t spend theirs.

Another reader says “‘misers’ do spend money. Both every day, and in the longer term acquisition of assets”. I’m not sure what she means by ‘assets’. But it’s only spending if it is a purchase of a new asset such as a building or a computer system. Such spending is called investment, and misers by definition save more than they invest. (The public discussion is hampered by the ubiquitous misuse of the word ‘invest’ by most journalists and financial professionals. Investment is an antonym of saving, not a synonym.)

So what is interest? It’s actually a conflation of two ancient concepts: ‘yield’ and ‘compensation’. In ancient societies the word ‘interest’ was commonly linked to the concept of reproduction. For example, the interest on a flock of sheep would be the lambs born each year. This is an example of the ‘yield’ concept. Likewise, in the modern context, GDP (gross domestic product) is the yield on a society’s productive assets.

It would appear that this kind of interest can never be negative. But if you properly account for depreciation of society’s productive assets, it can be negative. Just ask Marilyn Waring.

At its core, interest is a scarcity price. If lenders are scarce and borrowers are many, then borrowers must compensate lenders, in order that the credit-debt market should clear. (Note that ‘credit’ is debt owned; debt is ‘debt owed’. Credit is an asset; debt is a liability.)

Our problem is that we tacitly assume that borrowers are always abundant and that saver-lenders are always scarce, and therefore interest rates should always be positive; that is, we assume that borrowers should always compensate lenders. Essentially we assume, without realising it, that credit-debt transactions are always initiated by borrowers, and that prospective lenders play an accommodating role, essentially doing borrowers a favour. The interest rate represents the price charged for that favour.

It was not always like that, as pre-Protestant Christian theology taught. In that view, rich misers could exploit the poor and vulnerable by lending them money at interest. Charging any rate of interest was understood as a form of exploitation of the vulnerable; it was usury, it was Robin Hood in reverse. Indeed much historical anti‑Semitism arose because Jewish culture regarded usury as an acceptable commercial practice, whereas Christians and Muslims did not.

Clearly the issue of saver-lenders exploiting the poor and vulnerable has never gone away. The main difference is the intermediation of finance companies. You don’t have to walk far along the main street of Avondale (where I live) and New Lynn to see the finance companies and pawn shops who specialise in lending to the poor. (None of these companies went broke in the late 2000s; it was the Hanovers and Lombards, which provided leveraged debt to the rich, that failed.) These companies are just intermediaries; their creditors are, indirectly, the middle class Mums and Dads of New Zealand.

Dollar Dealers of Henderson and Avondale have been offering “free” pay day loans of $50. You just pay a $20 fee, otherwise it’s interest free! Instant Finance offers a 0% interest three month loan of $500. You just pay a $99 “establishment fee”! Who’s kidding who? Many of the good people of Avondale, New Lynn and Henderson are desperate. They can only gain income from selling stuff, either directly or by working for an employer who survives by selling stuff. There are also many misers who are successfully selling stuff, but who are not reciprocating by buying anything like as much stuff in return. So, in the absence of sufficient incomes, the poor of West Auckland borrow, either through sheer desperation, or because they are bombarded with the easy‑free‑cheap credit messages from these conduits of the creditor interest.

What if lenders are abundant and people wanting to borrow are few? The rules of the marketplace dictate that, in these circumstances, borrowers not lenders should be compensated. Given these underlying conditions so far this century, therefore true market interest rates have been negative. And actions by central banks to raise interest rates can only be understood as unwitting attempts to defy market forces and support creditors at the expense of debtors. Such attempts, in the mid-late 2000s, by central banks to raise interest rates in the face of a global savings glut played a large part in creating the global financial crisis.

Today the mystique of finance and compound interest is as strong as ever. In the Western Leader, just before the advertisements for the likes of Dollar Dealers, we get Rob Stock (for example “Boot camp on spending”, 13 March) promoting the message of ‘Simple Savings’, a group that advocates almost complete avoidance of spending. While we are exhorted by the financial literacy industry into miserly behaviour, central banks are constantly looking for excuses to raise interest rates above the rate of inflation. It’s a doomed enterprise that began, worldwide in the 1980s, in response to widespread erosion of savings in the inflationary 1970s.

Compound interest is conceived as a legitimate form of extortion. For everyone who receives it, someone else must pay it. That is unsustainable. It can only be accompanied by intermittent financial collapse (as in the 19th century), offsetting inflation (as in the 20th century), or unsustainable economic growth.

An interesting example of the marketing of the ‘financial literacy’ industry was broadcast in Radio New Zealand’s parenting segment of Kathryn Ryan’s ‘Nine to Noon’ show, on 20 March 2014. Stuart Locke, a finance professor from Hamilton, gave listeners a set of popular homilies about “money not growing on trees”, the demise of school savings schemes, and the miracle of compound interest. He advocates for a self-serving industry that tells us nothing about the nature of money as a constructed social technology, nor about the obvious reality that every dollar worth of stuff saved (ie advanced as credit) represents a dollar worth of stuff that someone else owes.

Nobody should ever be able to get away with insinuating that lending is good but borrowing is bad, because lending and borrowing are precisely the same thing. The lender owns the debt; the borrower owes the self‑same debt. Locke also advocated that everyone should join Kiwisaver because of the associated government freebies; he said this not long after having said that money is not free! And if we all take the advice, to save but not to borrow, then market-clearing interest rates would be hugely negative. We would have to pay for the privilege of being savers if hardly anybody was prepared to pay interest to savers.

If compound interest is so wonderful, then what has happened in the past to people who put a bit of money aside when they were young? If, 75 years ago (in 1939), you saved $100, about half of a typical person’s annual income, and lent it for 75 years at 7% interest compounded per annum, in the absence of debtor default you would collect $16,000 today (ignoring the matter of income tax).

Inflation makes low interest rates negative in practice. In the modern capitalist world in which the supply of loanable funds exceeds the normal demand for such funds, underlying interest rates are negative. We however are used to thinking of interest as a savers’ entitlement, a no‑questions‑asked reward for abstinence. So we try to create an artificial world in which interest rates consistently exceed the inflation rate, creating Shangri-La rewards from compound interest. It doesn’t work. The only people who increased their standard of living through compound interest are the lucky ones who took big risks that paid off.

A policy of ensuring the right of saver-lenders to a positive risk-free real rate of interest – that is, a policy of setting the Official Cash Rate above the inflation rate – is nothing less than a policy of usury.

We should abandon the witch-doctors’ brew that passes for contemporary monetary policy. We should act to ensure that interest rates serve their correct compensatory purpose, to clear the credit-debt market. I know it’s difficult for banks to administer negative interest rates; for example there’s the matter of people preferring to stash wodges of cash at home than to pay bank fees. But managing negative interest rates is something we are going to have to learn to do, given the underlying savings glut in our globalised capitalist world. After-all, squirrels like to save acorns and other nuts, but they don’t expect to receive interest.