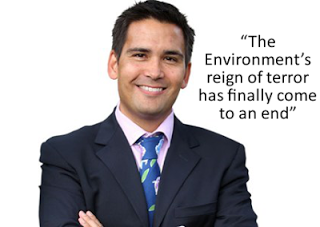 It’s deja vu all over again. Every time that I think the current New Zealand government couldn’t possibly divorce itself any further from reality, they manage it.

This time it’s climate and energy minister Simon Bridges — a man who presides over emissions policy settings that are set to double NZ carbon emissions instead of his own government’s goal of halving them — who achieved the feat. At the National Energy Research Institute’s Energy Conference in Wellington last week, Bridges told Professor Ralph Sims, a respected academic, IPPC lead author and expert on energy systems, that he had “read a lot of books” about climate change, and that if Sims spent 15 minutes with him he might learn something. Apart from the breathtaking chutzpah involved in a politician trained as a lawyer pretending to know more than an acknowledged expert in the field, it is one more example of how the modern breed of right wing politicians deals with evidence that’s inconvenient to their ideology. You can ignore it, pretend it doesn’t exist, pretend there’s other evidence that supports your position, or you can belittle the inconvenient messenger. But there’s no need to actually do anything. Or is there?

The energy conference provided a useful platform for the Royal Society of New Zealand to launch its latest “information paper”, titled Facing the Future: Towards a Green Economy for New Zealand (Full PDF, infographic). The RSNZ is not a body that has the luxury of ignoring reality. Its members have made careers out of exploring new knowledge, and applying facts to manipulate the world. Without the expertise inherent to the RSNZ, embodied in people like Ralph Sims, there would be no science in New Zealand, though there would undoubtedly still be politicians like Bridges. When the RSNZ has something to say, it is worth listening.

Facing the future looks at how New Zealand might move towards a low-emissions, sustainable economy that can at the same time deliver a good standard of living for the people living here. The challenges are not unique to NZ, but we are very well placed to make such a transition, being small, blessed with plenty of renewable energy sources, and already making good collaborative progress in some areas.

Unfortunately, just about every policy lever the government can pull is currently set in exactly the wrong direction. Instead of incentivising renewable developments, Bridges and his team are subsidising oil and gas exploration. Instead of cutting carbon emissions, we’re on course to double them. Instead of planting forests, we’re chopping them down to make bigger dairy farms that add to our emissions and pollute our streams, rivers and groundwater. Instead of thinking about sustainable development, we’re encouraging mining for coal and minerals. When Bridges talks about an “all of the above” energy policy, this is what he means.

But it doesn’t have to be like that. Consider the RSNZ’s suggested ways of “implementing change”:

To me, and I would think a majority of New Zealanders, all of the above might seem eminently sensible. But to a government that seems to find the mere mention of the word green to be anathema, it probably looks like a recipe for disaster, despite the RSNZ’s efforts to paint the exercise in words that won’t scare the blue horses.

Apart from a section of the paper where the RSNZ suggests moving away from crude measures of economic activity like GDP towards indices of human satisfaction, the last bullet point is perhaps the most telling from a political standpoint. A stable policy environment in an MMP parliament means building a robust consensus around long term action, and for the transition the RSNZ wants to see the country embark on, long term means decades.

Does that have to be pie in the parliamentary sky? I don’t think so. Green policy is 100 percent compatible with the approach laid out in Facing the future, and Labour policy — if it could only break its inherited obsession with GDP growth for growth’s sake — is not far from it. There are probably National MPs — though not the current leadership — who might be persuaded that building a resilient and rewarding country for future generations makes for good politics.

Put all that together, and there are encouraging signs that the time might be right for a national conversation on the issues raised by the RSNZ. The Pure Advantage group have been beavering away behind the scenes, putting the business case for a move to a greener economy, while the Wise Response group are petitioning parliament to start the process. And a motley crew of creatives and comedians are promising to give the issue a higher cultural profile. Perhaps a groundswell is building that will blow away the flimsy conceits that stand in for reality in the minds of right wing politicians. We can but hope.