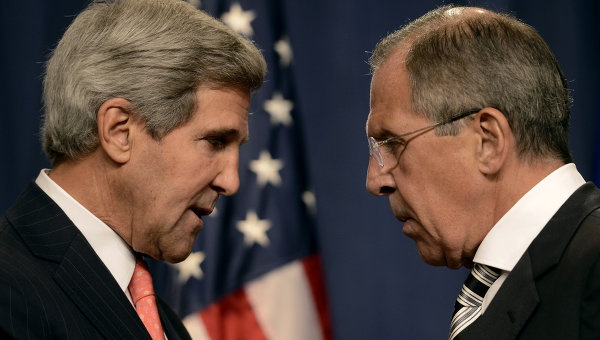 On Sunday March 2, I was sitting with New Zealand peace campaigner Alyn Ware in one of those iconic American diners in New York that serve cholesterol laden pancakes and bad coffee. I was enjoying the experience if not the fare.

John Kerry appeared on CBS news. His voice was stern. His demeanour serious. He was condemning countries using force to get their way:

“You just don’t in the 21st century behave in 19th century fashion by invading other countries on completely trumped up pretexts”.

Hello, I thought, he is going to make a national, indeed international, apology for his Senate vote on Iraq in 2003. Or perhaps it will be a warning to the Israeli government that the US would no longer tolerate their occupation and blockading of Palestinian territory.

Maybe it would also include historical references to the American war against Indo-China and support for Indonesia’s seizure of and massacres in East Timor. And then he may be declaring that the US would stop interfering in Venezuela and be withdrawing from Guantanamo Bay.

Alas! The pot was calling the kettle black over Russia’s actions in Crimea. Back in my hotel room I searched the internet for the New Zealand reaction.

I was not surprised that John Key and Murray McCully, supporters of the US invasion of Iraq, were following the Kerry line. As with their absurd position on isolating North Korea these are easy brownie points to score.

Thank goodness, they must sigh, Russia is not as large a trading partner as China so the vitriol can pour out and the sanctimonious pose is easy to adopt and we please Washington as a reliable and faithful ally. We have come home.

What is the point, you might well ask, of dumping the Union Jack if the new standard is, as an irreverent Australian would say, “as dead as a dead dingo’s donger” as it could only flutter in a breeze that blows from Washington?

But in hope against hope I thought Labour or the Greens might show some steel and some independence. But no, both trotted out the Washington line.

Was it beyond their whit to explain that while the authoritarian repressive Putin was not their cup of tea that if New Zealand is to deserve a reputation as an independent actor in international affairs that it is not just going to tamely follow the United States line?

That while it is possible to show that Russia is massaging events in Crimea that New Zealand should demand of the US and the European that they come to the international table on issues with clean hands as the legal principle of equity demands?

The “experts” often proclaim that international issues don’t win elections. That may or may not be true according to the time and circumstances.

But electors like myself want to vote for a party that in international relations is going to place itself decisively on the side of human rights, is anti – imperialists and does not go along with the usual prevarications and double-talk of the “international community”.

It has taken us a long time to rid ourselves of the puppet tag that followed from our puppy dog role in ANZUS and SEATO and record of voting, mostly, whichever way the USA or Great Britain demanded.

New Zealand was the unquestioning pro-Western ally that could be relied upon to justify the immorality of the war against Vietnam, the massacres of the Suharto regime in Indonesia and East Timor, the apartheid regime in South Africa and whatever other violation of international law or human right required the truth to be the first casualty.

The revolt of New Zealanders against the war in Indo China, nuclear weapons and apartheid changed the rules. In recognition of its cussed new independence of spirit New Zealand was demoted from ally to friend.

My hope is that inside the Labour Party and the Greens this spirit will be revived and that when the emperor has no clothes that New Zealand will be the little boy who points out this fact and gets the whole world laughing at the emperor. That will get my vote.