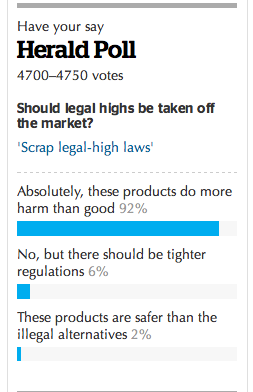 I was frustrated, no that’s not the right word, I was heart-broken for the families describing the pain of watching the lives of their loved ones being torn apart by hideous chemical concoctions. I had a taster of that pain, on the minutest-scale by comparison, when a friend had a breakdown (though I’m not sure really what the right word for it was) after using Kronic about a year ago. He is fine now and I am forever grateful that that episode did not have a worse outcome. At the time though, I cried and felt ill with fear and fury that the ‘bastard(s)’ as Hone called them could be making money off a product which caused such vast pain and suffering.

But I was also frustrated because taking these products off the market, as 92% of Herald readers are demanding is actually not going to make the situation better. 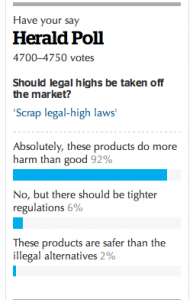 It won’t undo the damage done to Una Macnaughtan’s son and others, though I seriously wish there was a solution as straight-forward.

I am also frustrated that the purpose of this legislation as been so poorly explained that those who should be most relieved by its existence are protesting against it.

There seems to be some confusion in the article and in general about the state of the legislation and regulatory regime. So quick factsfor those not up do date:

This is a crack-down. This is not a free for all.

It can be expected that once the regulations are finalised and there is an agreed-upon testing scheme, this number may even decrease further. Furthermore, if further evidence is raised to show a previously approved product is actually unsafe, its license can be revoked.

The 92% of Herald readers who think that ‘these products do more harm than good’ need to know that ‘these products’ is a meaningless term. They can not all be grouped as having equal risks of harm. This is not to say any of these product are safe, and they are not actually allowed to market themselves as such, but some of them can fairly be labelled low risk.

This legislation is a step in the right direction. A step towards a rational model based on science, which makes decision based on risk of harm assessments. If anything, we need this model to go further. Drugs categorised under the Misuse of Drugs Act aren’t able to be assessed under the Psychoactive Substances Act, though Marijiuana would likely have a high chance of getting through. AND if it were legal, we wouldn’t be having a conversation about Kronic at all would we? There is a deep and tragic irony that many of these substances exist because other potentially less dangerous versions of themselves are illegal.

For the record, I am someone who has never used any of these substances. My position is not motivated by a personal desire for easy access. It’s motivated by not wanting to see more harm done by immoral cowboys working in legal grey-areas and profiting off human suffering. This is the best way to achieve that.